Is that you can't even take a nap without people commenting 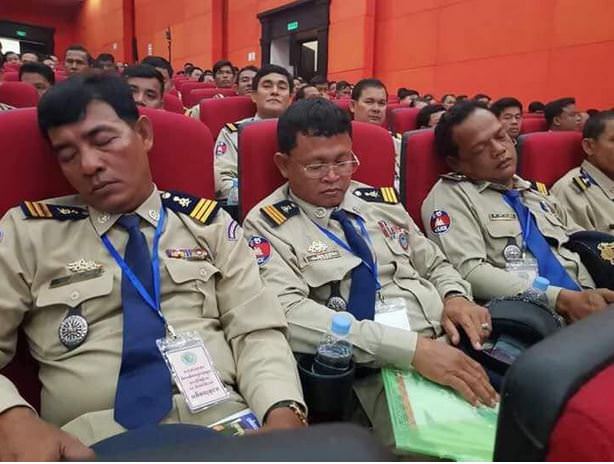 Police officers from the Srey Santhor District Police Station in Kampong Cham were chastised after this photo was posted on social media.
Cambodia Expats Online: Bringing you breaking news from Cambodia before you read it anywhere else!

Share
Content image - Phnom Penh Post
Kampong Cham’s finest. facebook
Two Kampong Cham police officers have been suspended from their work after taking photos of three other policemen sleeping during a celebration commemorating the 11th annual Cambodian Veterans Day at Koh Pich City Hall on Monday, that was chaired by Prime Minister HE.

The photos later found their way onto social media and went viral, drawing criticism from the public.

On Monday, Chamkar Loeu district’s police chief, Kheng Sreng, said it was coincidence that he saw his old friends sleeping and took the pictures. However, the pictures were taken before the prime minister had arrived at the event.

“When I looked at them sleeping, I took pictures and sent them to my friend . . . and he shared it with the provincial anti-narcotics bureau in a WhatsApp group.

“I love my friends very much and took their picture in order to make fun of them . . . I do not know who shared the picture on the Facebook,” Sreng said.

He also said the photos going viral on social media was unintentional and that he accepted the suspension.

“I do not know yet if I still have my job or the kind of punishment I will receive in the end. If I am transferred to administrative work, I won’t mind, but if I am fired, I will regret it for the rest of my life because I have worked about 31 years trying to help people,” Sreng said.

Sreng clarified that five police officers are serving punishment – himself for taking the photograph, the three who were caught sleeping and the one who shared it on social media.

Another officer who shared the picture on WhatsApp to the provincial drugs bureau group, and who has not been identified, has allegedly gone unpunished for his role in the incident.
Top

When I worked at a very large company in another Asian country, the best compliment that I ever received was a senior member of staff complimenting me on my work ethic, punctuated with " I never see you sleeping at your desk."
Top
Post Reply Previous topicNext topic
4 posts • Page 1 of 1