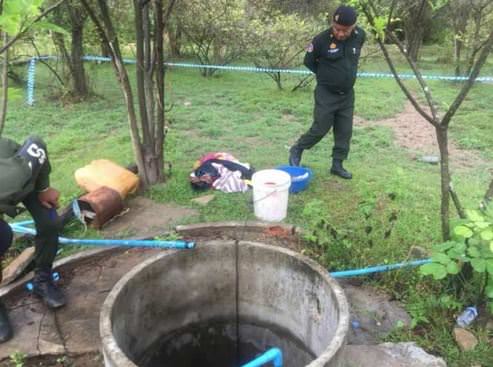 Photo rasmeinews.
May 2, 2018
Husband wanted for wife’s murder
Kampong Speu provincial police are seeking the arrest of a man suspected of killing this wife and disposing of her body in a well at their home in Samrong Ton district on Saturday night.

He said the couple married last year and lived together in O-Koki village in Tain Krouch commune, and had yet to have any children.

On Saturday night, the couple had a heated argument at their home because Mr Vuthy was jealous over his wife and accused her of having an affair with another garment worker at her factory, Cap Sophoan said.

Cap Sophoan said Mr Vuthy then started physically abusing his wife, leading her to threaten him with a divorce.

“The suspect was angry at the victim for threatening to divorce him and he strangled her to death,” Cap Sophoan said. “After killing her, he put her body into a sack and threw the body into a well behind their home in the village and fled the scene.”

He said Mr Vuthy has a history of domestic abuse, according to witnesses interviewed thus far.
https://www.khmertimeskh.com/50485544/h ... es-murder/
More photos on darknet thread.
Cambodia Expats Online: Bringing you breaking news from Cambodia before you read it anywhere else!

Re: Husband put wife's body down a well


I might just live long enuf to enter the esteem darknet .. oooooooouuuwwwweeeee