Is this guy for real?

Is this guy for real?

Idiot. If he thinks Cambodia is dangerous, he's a pussy.

Picture of the (Canadian, I think) doofus here:

Most Canadians I know are pretty sane. This one, not so much.

While in South East Asia, I had to adapt to omnipresent dangers, inherent xenophobia, corrupt police and criminals ready to kill at the drop of a hat. I learned to live cautiously and remain vigilant at all times to avoid becoming a victim. Just as everybody else, I put up with recurrent verbal abuse without as much as turning my head and stayed put in a hotel room every day after dark. Not that taking the abuse and keeping low profile made much difference, for in many South East Asian countries you don’t have to look for crime – crime will find you.

Needless to say, after spending a year in crime ridden countries, I returned back to Canada with a mindframe which dictated me to always remain aware of my surroundings, put up with continuous abuse and never leave home after dark. But… then I realized that I had never been abused, nevermind victimized in this country, that going grocery shopping at 11pm is normal here and done by many, and that after you’re done midnight shopping, you can safely carry your groceries home through empty back alleys and won’t experience as much as someone making inappropriate sound.

Even in my home city of Edmonton, Alberta – generally considered to be one of the most crime prone cities in Canada – you’ll have young girls strolling home alone late at night after having a few drinks in a bar and it won’t even cross their mind that it could be dangerous in any way. The worst thing that could happen to them is that they would stumble upon someone they’d like to have sex with and end up getting Chlamydia which they then merrily pass on (yep, talking from experience).

Whoever spreads the misinformation that a visit to third world countries is not any more dangerous than life in most first world cities is a delusional liar. I lived in, or visited New York, Los Angeles, Miami, London, Paris, Berlin, and many other western cities and have never experience anything remotely dangerous to every day existence in SE Asia. While living in London, UK at the end of the 20th century, I stayed in Brixton where I socialized every night by going to clubs and returning from them in the middle of the night every night. I also attended many concerts at the Brixton Academy pacing my way through the borough back and forth on foot.

Brixton, for those who don’t know, is what – to be politically correct – is referred to as a vibrant multi-cultural neighborhood. In other words, it’s considered to be a crime ridden area, a ghetto, however crime ridden in the UK is not the same as crime ridden in Thailand or the Philippines. The nearest I got to crime after 6 months of living in Brixton was being offered ecstasy in a club called Panic. Wicked music in that bar – all really heavy house with guest DJs the world over. Wonder if this club still exists. Since I do not do drugs, I just said I didn’t want anything and that was it.

I’m not trying to say that there is no crime in western cities. Crimes do most certainly occur – sometimes serious crimes – however, one must put things into a perspective before making an assumption. A chance of an encounter with a criminal on a mission in New York exists, but is negligent compared to chances of encountering millions upon millions of people going on about their lives, never engaging in criminal behavior. Most back alleys in New York do not have criminals lurking around at night. I wish I could say the same thing about back alleys in Indonesia or Cambodia.

As someone who’s well aware of dangers, I could not possibly consider any third world country for an extended stay in the wilderness. Being generally safe, my homeland of Canada was a solid bet. I would have liked to do it in other safe countries, such as Iceland, Switzerland, New Zealand, Norway, Japan or Ireland, but because of the 21st century world limitations, these options were either impractical or downright impossible.
Last edited by that genius on Sun Apr 22, 2018 6:42 am, edited 2 times in total.
Top

hes the owner of bestgore.com
Top

His experience in 3rd worlld countries includes the "the Carribean and Eastern Europe"?? I can picture him aimlessly wandering the streets of Phnom Penh carrying a $1600 Laptop. He would have pissed himself in Lima.
Top

Don't forget his $5000 camera... And he bought a better lock for 5000 Reil lol... I've come across way to much misinformation on the web to take any one story at face value unless I can corroborate it.

Anyone who refers to Thailand as "crime ridden" has issues or an agenda, probably both.
Yet somehow he has nothing but praise for Vietnam.
Top

This pops up on the page...weirdo! Admin pse delete if against rules. gavinmac should run a criminal record check. 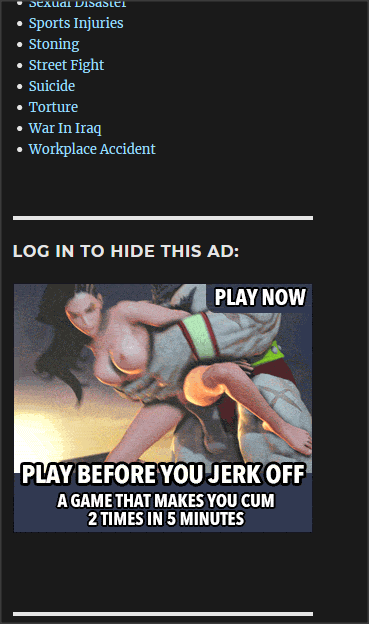 This pops up on the page...weirdo! Admin pse delete if against rules. gavinmac should run a criminal record check.