Head of RCAF university accused of corruption and nepotism

Head of RCAF university accused of corruption and nepotism

Sometimes, when the scale of corruption becomes overly blatant in a certain place, measures are taken.
Or, when one person is putting large amounts of money in their pockets and keeping it in the family, others will notice this and demand a more equitable share. The over-greedy person will be moved to a less lucrative position, and someone else will collect the bribes.

RCAF university head in graft scandal
5 April 2018
A newly published document suggests the recently transferred head of Cambodia’s National Defence University was embroiled in a scandal of nepotism and corruption at the time of his dismissal in March.

Oung Sean was removed from his post on March 2 following an investigation by the Anti-Corruption Unit. An ACU document dated February 1 and published by local media on Monday outlines a litany of irregularities. It was not clear how the outlets obtained the document, which the ACU has not publicly released.

Signed by ACU head Om Yentieng, the document accuses Sean of hiring 70 of his relatives, who received a monthly salary though none of them actually worked.

Sean also reportedly ordered subordinates to gather bribe money from promoted soldiers, charging $200 to $400 to lieutenants and $500 to $1,000 for majors.
Sean could not be reached for comment.
https://www.phnompenhpost.com/national/ ... ft-scandal
Cambodia Expats Online: Bringing you breaking news from Cambodia before you read it anywhere else!

Re: Head of RCAF university accused of corruption and nepotism 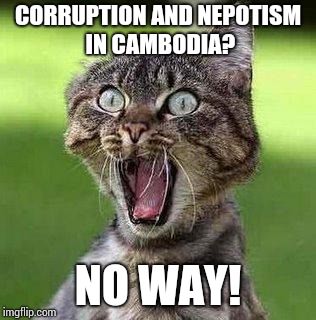 Re: Head of RCAF university accused of corruption and nepotism

Spoiler:
Sorry ,, bad joke
Cambodia,,,, Don't fall in love with her.
Like the spoilt child she is, she will not be happy till she destroys herself from within and breaks your heart.
Top
Post Reply Previous topicNext topic
3 posts • Page 1 of 1