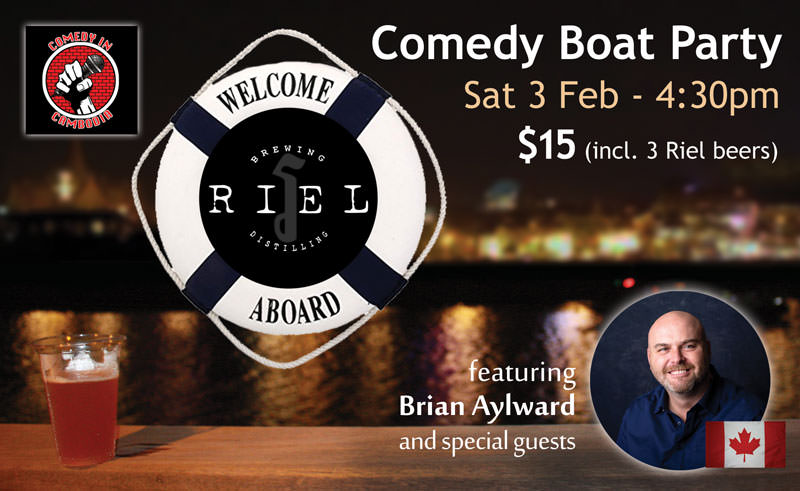 Buoyed by the success of their previous event last year, Riel Brewing & Distilling and Comedy in Cambodia once again join forces to present the Riel Comedy Boat Party on Saturday 3 February!
Three delicious Riel craft beers, a live stand-up comedy show and a beautiful sunset river cruise are all yours for just $15 per person. Book now via email to [email protected] and you will receive a 20% discount on all tickets!
Boat will depart at 4:30pm from the Riverside opposite True Face nightclub (corner Sisowath Quay and St 90), and will return around 8pm. Look out for the Riel Beer banner.
Headlining the comedy show will be the mighty Brian Aylward, voted Best Standup Comic at the Canadian Comedy Awards in 2016. Brian is now based in Bangkok, and he juggles his time between running Mad About Comedy shows there, performing all over the region and also flying back to his homeland for sold out theatre show tours.
Brian will be supported by visiting UK comic Graham Wooding, and Phnom Penh-based American stand-ups Sam Thomas and Stevo Joslin.
Tickets are limited so book NOW to secure your place on the most entertaining boat party in Cambodia! 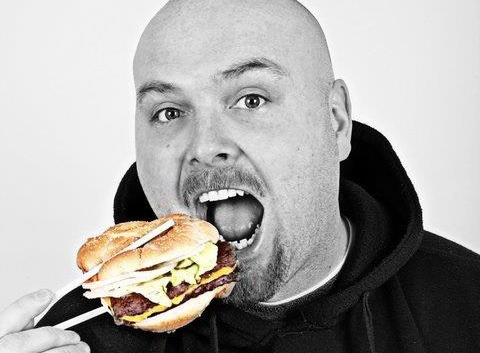 Brian Aylward
Based on a bet made back in 2005, Newfoundland native and then English teacher Brian stepped on stage for the first time at a rowdy expatriate bar in Anyang, South Korea. He went on to pioneer the active English stand-up comedy scene in South Korea, officially establishing Stand Up Seoul in 2007 and turning the country into a legitimate international destination on the circuit.
Aylward performed hundreds of shows across Asia, taking his own brand of acerbic humor to the likes of Vietnam, Singapore, Malaysia, Cambodia, Hong Kong, China, Indonesia, Thailand, and even Myanmar. Upon returning to his native Canada in 2010, Brian went on to become a two-time finalist in SiriusXM Radio's "Canada's Next Top Comic" (2011/2013), be a regular fixture across Canada’s Yuk Yuk’s comedy clubs, and perform theatre tours across the country.
Last year, he was named “Best Standup Comic” at the prestigious Canadian Comedy Awards, and he also was nominated in the “Best Comedy” category at the 2017 Fringe World in Perth, Australia.
With an enormous presence and a consummate love for making people laugh, Aylward details his deepest frustrations with the world through his razor-sharp routines and huge sack of ridiculous stories from his travels around the globe. Brian is also the (unofficial) world record holder for the highest number of 10 minute sets in a single day, performing 21 times during the Haebangchon Festival in Seoul. 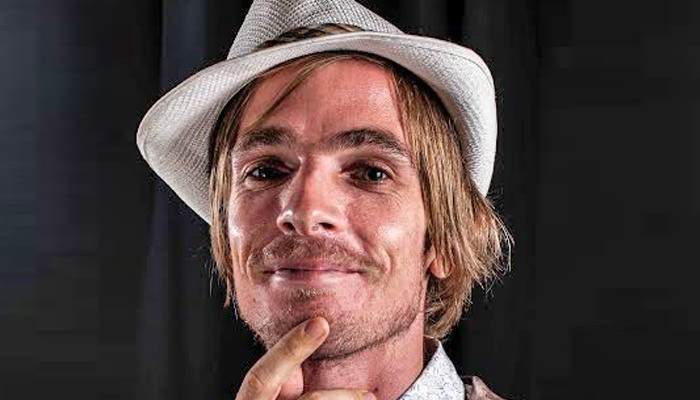 Graham Wooding
Having won a comedy talent competition on his eleventh gig, Londoner GrahamWooding knew his love of stand up would stay with him forever.
With five years on the UK circuit and five Edinburgh Fringe festivals behind him, he took to the skies to travel the world. Touring with groups and performing on his own, his charm and observational wit took to the audiences delight.
Graham performed on British TV shows including Paramount Comedy Channel and Nuts TV and has written material for high and low-level comedians.
After a five-year break, Graham found himself in Asia, helping to kick start the Bangkok comedy scene, before jetting off once again to perform in Malaysia, Myanmar, Cambodia, Vietnam, Hong Kong and Poland.
Cameo roles in Hollywood movies such as The Railwayman and many TVC acting roles continue to place Graham at the forefront of entertainment in whatever nation he finds himself.
Oh, and he likes tea.
Top
Post Reply Previous topicNext topic
1 post • Page 1 of 1