Breaking news from Cambodia can be found here. CEO often finds Khmer news and translates it into English for our readers if it is interesting to expats, locals, Cambodians living abroad and anyone who wants to stay informed of the latest local and international news stories about Cambodia and our neighbors in South East Asia. There are many sources for Khmer news articles and they can all be found here in one place. Most of the media comes out of Phnom Penh, Siem Reap or Sihanoukville, but we cover national Cambodian news from all provinces.
Post Reply Previous topicNext topic
39 posts

Ly Sovann, spokesman for the Ministry of Health, said that the ministry had issued a letter on the ban, but he couldn’t provide a copy of the letter or recall the date the order was issued. He also didn’t say what enforcement measures the ministry was taking to implement the ban.

“Currently, the MoH [the Ministry of Health] bans using antibiotics without a prescription,” he said.
The ban is meant to counter the overuse and misuse of antibiotics, which leads to resistance and limits the drugs that are able to treat infectious diseases.

One Phnom Penh pharmacist, who declined to provide her name, said yesterday that she had received the ministry’s letter, which also had information about training sessions on antibiotic misuse. The owner added that she now required her clients to show a doctor’s prescription for antibiotics – unless they appeared to be seriously ill, she said.

However, three other pharmacies visited yesterday were openly selling various antibiotics over the counter. Saing Sengkhy, owner of Lika Pharmacy, said he was continuing to sell antibiotics as usual since he hadn’t received any notification from the ministry informing him of any changes...
http://www.phnompenhpost.com/national/m ... escription
Cambodia Expats Online: Bringing you breaking news from Cambodia before you read it anywhere else!

“In Cambodia, the misuse of antibiotics is a known phenomenon, but there is little data on microbial resistance,” reads a Tuesday press release accompanying the study.

To rectify this data gap, the Institute conducted a four-year study to examine the frequency of “extended-spectrum beta-lactamase producing enterobacteria (ESBL)”, a type of bacteria resistant to many types of antibiotics.

“When I arrived in Cambodia in 2012 . . . I was surprised to see in the urine of Cambodian patients a lot of resistant bacteria, with a frequency much higher than that observed in France,” Dr Alexandra Kerleguer, from the Institute’s medical Biology Unit, said.

The Institute collected samples at Calmette and Choy Ray hospitals, including blood, stool, urine and more. The results showed not only a high rate of ESBL in Cambodia, but that it is continually growing.

The total proportion of ESBLs increased from nearly 24 percent more than 38 percent from the start of 2012 until December 2015, with E. coli in particular seeing a marked increase, from nearly 29 percent to more than 48 percent.
The report by Kerleguer and others claimed the change was “a gradual and statistically significant increase”.

The paper advocated for a “dual strategy” in reducing the problem, calling for fewer antibiotics prescriptions and higher hygiene standards both within hospitals themselves, and in communities in general. The prescription of certain antibiotics must “be strictly and continuously supervised to prevent the emergence of multi-resistant bacteria”
The paper concludes by saying the prevalence and spread of ESBLs is a “public health concern” and warning that there is a “very real risk of a therapeutic dead-end”, whereby these diseases can no longer be treated.
http://www.phnompenhpost.com/national/c ... high-study
Cambodia Expats Online: Bringing you breaking news from Cambodia before you read it anywhere else!

Well, word hasn't spread to my pharmacy in Phnom Penh and I doubt many others as well. If used correctly by taking the antibiotic that pinpoints the culprit and taking the full regimen removes any danger of resistance.
As my old Cajun bait seller used to say, "I opes you luck.
Top

Be careful of STDs boys ... Would be a shame to get a chlamydia antibiotics resistant

I would think the problem is how the locals take the antibiotics. Some pharmacy's in Asia just give you what they think will cure everything. mostly different coloured tablets looking like Smarties. There wont be in this a supply of Amox or Ciprofloxacin enough for twice a day for a week, but probably 2 days worth. So the problem inside gets beaten down but not eradicated. Comes back resistant.
So now add the doctors fee $20 to $50 for a case of Gastro that you could cure yourself!
Top

Your grasp of the situation is spot on. Usually the "pharmacist" is not more qualified than the customer. They even give antibiotics for flu.
As my old Cajun bait seller used to say, "I opes you luck.
Top

So a poor person gets diarrhoea, goes to a pharmacy with 10,000 riel to get a fix of ofloxacyllin 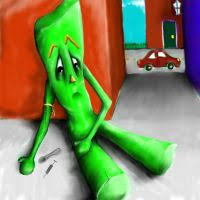 Pay $200 a month to a qualified pharmacist and you can hang their certificate on your wall and start dishing out pills.
Top

Picked up some Amoxicillin today, no problem at all. Guess they forgot to tell the pharmacies
Top
Post Reply Previous topicNext topic
39 posts