Sorcerer decapitated in Kampot
November 22, 2017
An old man who villagers believed held black magic power had his head cut off on Sunday [19 November]in Kampot province’s Chhouk district.
Police said they found out about the death of Oy Sok, 62, a day later and were hunting the killer.​ Keo Pheary, chief of Ta Ken commune police, said the victim was well known for sorcery, though the motive of the murder was yet to be found.

“District and provincial police are coming to investigate the crime scene,” Mr Pheary said. “He was found wearing a krama. His head was cut off and taken away. We don’t have any clues yet.”
Mr Sok’s body was handed over to his children for his funeral on Sunday. San Ngorn, chief of staff at the district police, said Mr Sok was staying at his rice field hut alone when the murder happened.

Yun Phally, Licadho coordinator in Kampot province, said that his organisation would take part in the investigation.
“People still believe in the superstition and there is a lack of understanding of the law. That is why it leads to the belief from ancient times that sorcery really exists.”
Mr Phally urged authorities at all levels to do more to spread awareness of the law and let people understand that sorcery is a false belief.
http://www.khmertimeskh.com/91728/
Cambodia Expats Online: Bringing you breaking news from Cambodia before you read it anywhere else!

Re: Sorcerer decapitated in Kampot

25 November 2017
SIEM REAP - Two men were arrested on 24 November as prime suspects in the murder of 62 year old Ouy Sok in Kampot province on November 20th. The two murder suspects had fled from Kampot at the time of the crime, and so were sought by police as suspicious characters, and eventually they caught up with the two men, who were arrested in Siem Reap. 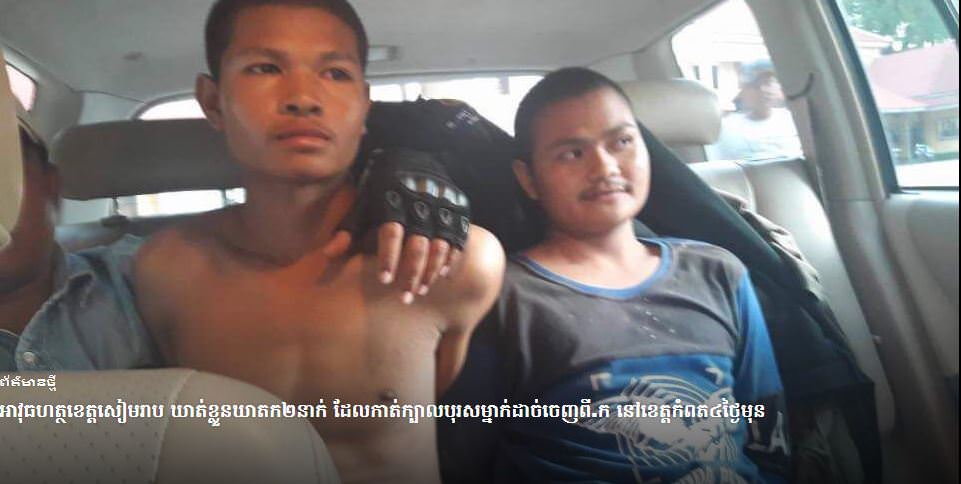 The beheaded victim was accused of being a sorcerer by the other villagers, but it is still not clear why the killers removed the victim's head or what happened to it.
Police are attempting to educate the local people against beliefs in witchcraft, and thus prevent further violence against suspected witches.
Cambodia Expats Online: Bringing you breaking news from Cambodia before you read it anywhere else!

Re: Sorcerer decapitated in Kampot

‘This was revenge’: beheading of Kampot healer for ‘sorcery’ shows dark side of superstition
29 November 2017
Kampot province:
It was raining the night that the attacker – or attackers – broke into Ouy Sok’s cottage, decapitated him and covered his headless body with a plank of wood. Pich Ra, 25, recalled that fact the next day when the village chief brought him the news about his neighbour.
“He did not deserve to die,” said Ra, who described Sok as a quiet man who spent his days tending to his three cows. “This was revenge for his sorcery. But I don’t think he was a sorcerer.”

More than a week after the 69-year-old traditional healer was beheaded in Kampot province for being a “sorcerer”, police are silent on whether they have any suspects, villagers remain divided over whether their neighbour was truly a practitioner of black magic and Sok’s head still has yet to be found.

The grisly killing highlights the still-strong belief in black magic in many parts of Cambodia, where a predilection for mob justice – and perhaps, in the case of Sok, a lack of access to mental health care – often make for tragic outcomes.

Residents of Tamnak Trayueng and Chamkarmon villages, in Kampot’s Chhouk district, say they had been suspicious of Sok for years after he began acting strangely – talking to himself, nailing stakes aimlessly along the roads and shouting that he had sickened their relatives with black magic.

Sok’s family believes his increasingly erratic behaviour was the result of the onset of mental illness and excessive drinking. To other villagers, however, it was interpreted as an obvious sign of sorcery. Soon, villagers started reporting a number of unusual deaths that they attributed to Sok...
http://www.phnompenhpost.com/national/w ... perstition
Cambodia Expats Online: Bringing you breaking news from Cambodia before you read it anywhere else!