Memorials for this sad anniversary, but no accountability, no responsibility. 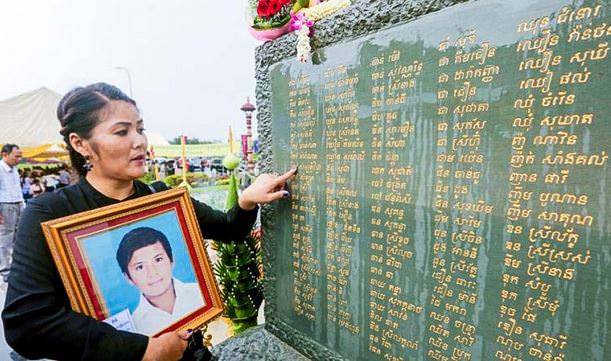 Commemoration for stampede victims
17 November 2017
PHNOM PHENH - Phnom Penh City Hall will organise a religious ceremony on Wednesday to commemorate victims of the Koh Pich stampede seven years ago.
Municipal Governor Khuong Sreng said the ceremony would take place at 7am at the memorial stupa near Koh Pich bridge.

Ten monks would mark the ceremony dedicated to more than 350 people killed on the bridge.
“This announcement is to invite Buddhists and relatives, especially the families of the victims, to attend the ceremony,” Mr Sreng said.

The government created a commission to find the cause of the stampede and said later it had been an accident. No official was punished or held responsible.
http://www.khmertimeskh.com/5090903/com ... e-victims/
Cambodia Expats Online: Bringing you breaking news from Cambodia before you read it anywhere else!

Re: Ceremony to be held for the 350 victims of Water Festival stampede

The stampede, which injured hundreds of festival-goers, occurred on a bridge to Koh Pich on the final day of the three-day celebration. No official reason has been given for what sparked the panicked crush of bodies, and authorities closed the weeklong investigation, with Prime Minister HE declaring it an accident.

Families were joined by authorities and 108 monks for a ceremony blessing the dead.

“I heard that there was a stampede and that’s why they ran over each other. I want to know who is going to take the responsibility for this case, because in the past, I heard that it is an accident and no one caused it, but that was it,” he said.

“I really want to know the reason [why it happened], but if they do not tell me, I do not know what to do. I can only organise the ceremony for my dead children,” said Nov Ros, whose two daughters died in the incident....
http://www.phnompenhpost.com/national/f ... e-together

In memory of the victims of the stampede at Koh Pich bridge, Phnom Penh Water festival 2010, Cambodia. RIP. 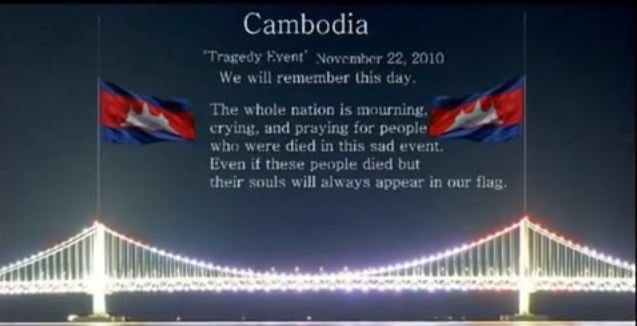 Scenes of the aftermath of the tragedy 2010.

[Video of the stampede on the bridge can be found on the darknet thread.]
Cambodia Expats Online: Bringing you breaking news from Cambodia before you read it anywhere else!