Clarity sought for high-rise height rules
Thu, 2 November 2017
The spread of high-rise buildings and raft of construction sites across Phnom Penh are signs of sustainable development, but city planning experts say more thought needs to be put into where these structures are placed and how high into the sky they reach.

Huge construction projects have been started on the outskirts of the city, but many of them are being developed in the heart of the capital, just a few steps away from heritage landmarks like the Royal Palace, Independence Monument and more.
Dr Van Vat, a city planning specialist, said that when planning for a country’s urbanisation, governments had to be aware of how tall every building was and where it would be erected. In Phnom Penh, there has been an effort to force construction companies to specify the height of the building they’re working on, but the rule is not yet official and is enforced sporadically, he said...

Sorn Seab, director of Key Real Estate, told Post Property that the Ministry of Land Management, Urban Planning and Construction’s most recent sub-decree set parameters for the locations of buildings but did not include specifications on the height of constructions.

He said the government has experience with enforcing construction rules, as they do not allow projects to build within 500 metres of the Royal Palace, Independence Monument and the city’s airport. “Constructions have to be between 300 metres and 500 metres from those landmarks,” he said.

Seng Lot, spokesman for the Ministry of Land Management, Urban Planning and Construction, said the rules on building location were not yet legalised but were enforced informally. Companies knew not to build near major tourist sites, but Lot said the ministry was working with City Hall and stakeholders in the sector to formalise construction rules. He did not respond to questions about height restrictions for construction projects.
http://www.phnompenhpost.com/post-prope ... ight-rules
Cambodia Expats Online: Bringing you breaking news from Cambodia before you read it anywhere else!

Given there are not a lot of very old buildings in PP, it would be good to put protection in place for those of historical or architectural significance if they haven't already. Anything by Vann Molyvann should be protected, and an audit of "New Khmer" style buildings should be done and protection put in place for the best examples of those. And any art deco or other significant styles if there are any.

I see the Cine Lux on Norodom is currently being demolished http://www.phnompenhpost.com/post-prope ... yle-cinema 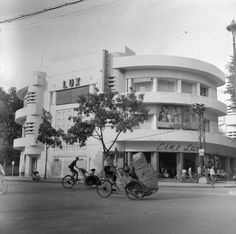 No matter how much it rains, the dirt never washes away.
Top
Post Reply Previous topicNext topic
3 posts • Page 1 of 1

Users browsing this forum: No registered users and 46 guests