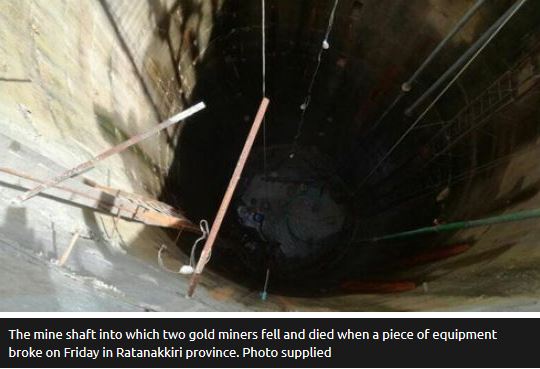 Two siblings, including one teenager under the legal working age, died on Friday at a mine belonging to Indian firm Mesco Gold in Ratanakkiri province, prompting the Ministry of Mines and Energy to immediately suspend operations to carry out an investigation, officials said yesterday.

Sen Voeun, Yatung commune police chief in O’Yadav district, identified the victims as Chak Sarith, 17, and Chak Sarom, 20. The brothers from Tbong Khmum province had only been working for the company for a week.
They went down a mine shaft in a bucket, which the minstry said was designed to carry rocks, not workers. When the pulley broke, the bucket fell down the shaft.

Hun Bunthan, head of the provincial Department of Mines and Energy, said Mesco Gold agreed to compensate the family $5,000 for each death. The company is licensed and began to mine gold in the area this year.

Company Director Rajeev Moudgil said all regulations and safety procedures are in place at the mine...
http://www.phnompenhpost.com/national/s ... e-accident
Cambodia Expats Online: Bringing you breaking news from Cambodia before you read it anywhere else!

Re: Two brothers killed in mine belonging to Indian firm Mesco Gold; Ratanakkiri

This doesn't look good - the safety regulations were ignored and one of the dead workers was underage for hazardous work.

Mine company probes two deaths in Ratanakkiri
Tue, 17 October 2017
New details have emerged surrounding the Friday deaths of two miners – one of them under the legal working age – at the diggings of Indian firm Mesco Gold in Ratanakkiri province, with company officials acknowledging yesterday that the fatalities might have been prevented, but also offering conflicting accounts of how the accident happened.

The company on Sunday said the two victims – trainees Chak Sarith, 17, and Chak Sarom, 20 – had ignored clear safety instructions not to use a bucket, meant to carry rocks, to lower themselves down the vertical shaft.

Sudheer Gulwade, general manager at Mesco in Ratanakkiri, yesterday said the victims were using the bucket to go up, and that there were two instructors at the bottom of the shaft, raising questions as to why the instructors had permitted the trainees to get into the bucket. He said there was also a signal man, at the top of the shaft, and a driver, in a nearby room, to operate the bucket...
http://www.phnompenhpost.com/national/m ... atanakkiri
Cambodia Expats Online: Bringing you breaking news from Cambodia before you read it anywhere else!