In a bizarre Cambodian twist, another monk who was arrested for posting a photo of himself with a toy gun on social media was denied bail in Battambang. He himself has linked his photo to the killing of the Venerable Sum Sitha in Kratie province, but there are suggestions that his arrest is due to his role as a political observer in Battambang. It is no secret that many things in Cambodia are not as they first appear to be. 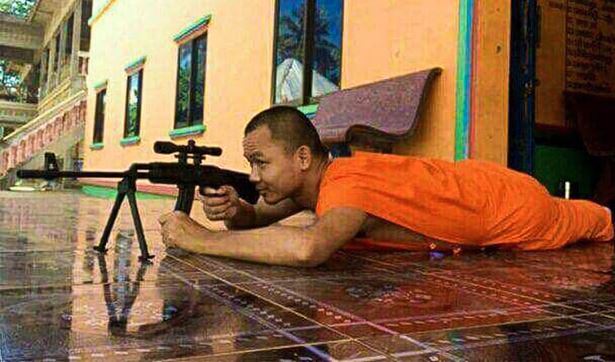 The photo posted by Horn Sophanny.

- The Court of Appeal yesterday denied bail for former monk Horn Sophanny, who was charged with illegal weapons possession and incitement to commit crime after posting a photo of himself brandishing a toy rifle on Facebook.

Five days later, Mr Sophanny posted the photograph on his Facebook page, saying: “If the killers dare to come to my pagoda, I will use this machine gun to kill them!”

Choung Choungy, Mr Sophanny’s lawyer, said he will seek bail for his client all the way to the Supreme Court.
“I will appeal this decision soon,” Mr Choungy said. “I think that this decision is very unjust for Mr Horn Sophanny and it also shows that our judiciary system is not good because holding a plastic gun, there’s no law that bans that.”...
http://www.khmertimeskh.com/5079230/cou ... monk-bail/
Cambodia Expats Online: Bringing you breaking news from Cambodia before you read it anywhere else!