Breaking news from Cambodia can be found here. CEO often finds Khmer news and translates it into English for our readers if it is interesting to expats, locals, Cambodians living abroad and anyone who wants to stay informed of the latest local and international news stories about Cambodia and our neighbors in South East Asia. There are many sources for Khmer news articles and they can all be found here in one place. Most of the media comes out of Phnom Penh, Siem Reap or Sihanoukville, but we cover national Cambodian news from all provinces.
Post Reply Previous topicNext topic
19 posts

If the same restrictions,,, or worse , were bought in here , and all the foreign workers including expats were to leave , maybe due to a conflict ,,,, how would Cambodia cope. I can just see tuk-tuk drivers abandoning their tuk-tuks to take up teaching and motodops who are quite capable of handling beer in large quanities ,, running girlie bars as if it they were born into the trade.
Cambodia,,,, Don't fall in love with her.
Like the spoilt child she is, she will not be happy till she destroys herself from within and breaks your heart.
Top

- Thousands of Cambodian workers are being extorted as they flee Thailand and return home hoping to secure valid employment papers and passports amid a crackdown on illegal migrants in the country.

The mass deportation is not as severe as the last such case in 2014, when more than 200,000 workers left Thailand in the wake of the military coup there, however migrants have been streaming over Poipet International Border Checkpoint in Thai immigration police trucks. More than 50 migrants were packed into each truck, along with their children and luggage. At least five immigration police trucks have been transporting workers to the Poipet checkpoint alone each day.
More than 4,200 migrants have been sent home from Thailand through Poipet since Wednesday of last week.

Ms Thea gave Thai police about $30 to be transported to the Cambodian border.
“If we refused to pay or objected to this blatant extortion by the Thai authorities, we would be kept in immigration police camps for many days before being sent to the border,” she said.
Another migrant Vuth Pheakdey, who worked in a restaurant in Bangkok’s Don Muang district, said he was required to pay $294 in fines excluding transportation fees after he was accused of working illegally in Thailand...
http://www.khmertimeskh.com/news/39942/ ... crackdown/
Cambodia Expats Online: Bringing you breaking news from Cambodia before you read it anywhere else!

It was reported yesterday that certain border crossings between Thailand and Cambodia have been closed until further notice. It's possible that this is no longer in effect, or then again, it may remain in place for some time while talks are held. Please post if you have any updates.


03/07/2017 17:56
Banteay Meanchey (FN), June 3 – As of yesterday, all points of entry along the Thai border in Banteay Meanchey and Battambang provinces have been closed.

There is no indication of when they will be re-opened, according to the Banteay Meanchey military commander on Monday.

The border closure comes on the heels of a recently enacted Thai law that drastically reduces job opportunities for migrant workers.

The commander noted that some Khmer workers are expressing their dismay with the closures, as they utilize the crossing to get to and from home and work.


BANGKOK: -- MILLIONS of illegal migrants and their employers have been given a six-month reprieve as the government has bowed to pressure and postponed full enforcement of the tougher foreign-labour law until the end of this year.

Over the next four months, the Labour Ministry will also review the newly-introduced Executive Decree on Foreign Workers Management to make it easier to register and hire migrant workers.

It cost me all in 23,000 baht to obtain a legal 2 year L-a Visa, Wp and health card for my gf
In a nation run by swine, all pigs are upward-mobile and the rest of us are fucked until we can put our acts together: not necessarily to win, but mainly to keep from losing completely. HST
Top

he figured this out all by himself>>> Obvious result..... what a joke

“The effect will not be felt right away, but it will hit fishing and and construction industries by affecting operating and production costs. Next, we will have expensive fish and seafood,” Mr Bhuritt said.

“Let’s think about it, if there are not enough migrant workers to meet demand, employers will have no choice to but try to find cheap workers to replace them – and such workers are not easy to find.

“Thai people do not want to work as labourers, and those who are willing to do so will only work for higher wages, which limits the number of people available for employers to hire.

There are 2 massive constructions sites ( condos, pool villas, shopping mall) 5 minutes from my house and they will come to a complete halt without Burmese workers.
In a nation run by swine, all pigs are upward-mobile and the rest of us are fucked until we can put our acts together: not necessarily to win, but mainly to keep from losing completely. HST
Top

another side of how Cambodia loses when Khmer migrants are forced back ( or choose to head back),, loss of money sent to families

..... There are pressing needs for the Cambodian government to make legal recruitment both cheaper and more migrant-friendly. Cambodia, perhaps unwittingly, has become a labour exporting country. While 15 years ago a relatively small number of Cambodians worked abroad, today there are more than 1 million migrant workers abroad, the vast majority of them living and working in Thailand. Put differently, this suggests there is one migrant worker in Thailand for approximately every four households in Cambodia.

Economists and policymakers like to point to the billion plus dollars these migrants send home annually as evidence of their contribution to development. But this only begins to shed light on what migration means for rural households. In the context of falling commodity prices, increasing landlessness, environmental stress/shocks, and rising indebtedness, migration is often perceived as the only viable option for rural households to make ends meet, to improve their lives, and to repay rapidly growing household debts.

http://www.phnompenhpost.com/analysis-a ... -dignified
In a nation run by swine, all pigs are upward-mobile and the rest of us are fucked until we can put our acts together: not necessarily to win, but mainly to keep from losing completely. HST
Top

Thai Govn’t [sic] Do Not Punish Thai Employers and Deport Cambodian Workers
07/07/2017 11:14
Phnom Penh (FN), July 7 – The Royal Government of Cambodia issued a statement dated Friday that the Thai government will not punish employers who have employed undocumented Cambodian workers.

The statement also revealed that Thai authorities will not deport Cambodian workers who are presently working in Thailand.

The Thai Ministry of Labor will allow 15 days (August 24 to September 7) for undocumented Cambodian workers and Thai employers to register at the Foreign Workers Registration Office.

Once registered, workers will receive temporary legal status and will have to wait for a nationality certificate to become a permanent legal worker.
=FRESH NEWS 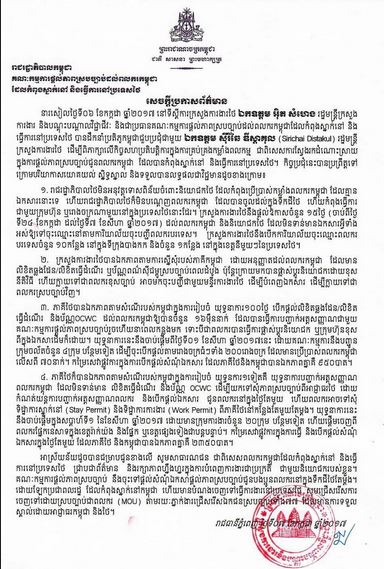 1. How much would those documents cost? The real cost, not the gazetted cost.

2. Do you think that people who are forced to travel abroad to scrape by a meagre living can afford those fees?

Hundreds of thousands of Mexicans and other illegals go to the States, often to do jobs no one else will do.

It's just Thais doing what they do best, being officious, xenophobic idiots.
Jesus loves you...Mexico is great, right?

for a migrant worker to be legal Look at my post above with the Jpeg.
REAL COST

OK< i did it for my gf,
1st need an passport than an employer,
than we used an agent here in phuket and an agent in Poi pet
TOTAL cost ( after passport ) was 23,000 baht ($660) I know one person in pattaya hired a Camboidan and it cost them 20,000 baht which included the passport
that includes the 2 year L-a migrant visa,medical check up and issuing a medical card and a 2 year wp
2nd 2 year renewable in thailand so 13,000 baht

#2 . i think this is where the scam on the Cambodian side comes in as agents will "advance" the fees and get a kick back and or interest
The Burmese that live up the street from me in a camp were hired by a big construction company and they pay'd all fees and give them place to live and decent salary ( min wage 300 baht for unskilled, up to 500 baht /day for skilled)
Most Cambodians are employed up around Chonburi/Bangkok for construction,fishing industry

With over 5 million migrant workers in thailand it must be a good deal as like i said, thai's wont do the work even if the employers pay more.

another thing , total time from when we first started the process was over 5 months
In a nation run by swine, all pigs are upward-mobile and the rest of us are fucked until we can put our acts together: not necessarily to win, but mainly to keep from losing completely. HST
Top
Post Reply Previous topicNext topic
19 posts