A happy ending in this story from Phuket last week.

PHUKET - On Monday June 26th, an Australian woman came to the rescue of a Thai woman who was close to drowning at Karon Beach.

Facebook user Thanawat Vinitpairoj posted photos along with a message which read, “Late in the afternoon while I was taking photos of two Australian women and their child on Karon Beach, one of the women ran down to the sea, took off her trousers and jumped into the water, swimming out towards a woman who was close to drowning.”“I looked for a lifeguard but could not see one, but this woman saved a Thai lady from drowning. 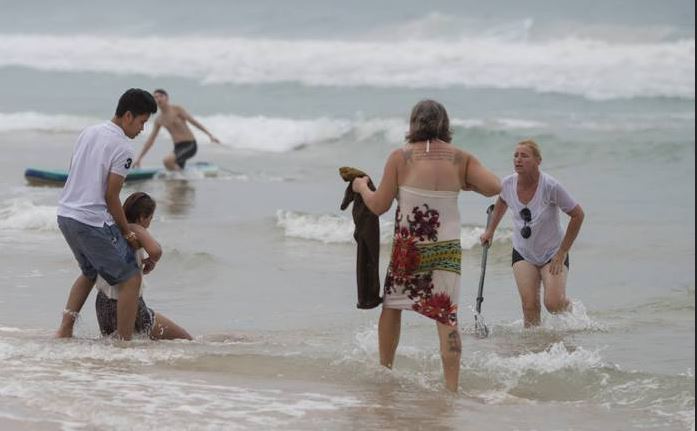 The Australian woman changed her clothes and then walked back down towards the water where she was hugged by the other foreign woman. She is a hero.”
The Phuket News later contacted Thanawat, who explained further, “A Thai woman and a Thai man were playing in the surf, but suddenly they got hit by a large wave.
The man managed to get back to shore using a surfboard but the woman was stranded out at sea. One of the Australian women swam out to help her without any hesitation,” he said...
http://pattayaone.news/en/australian-woman-saves-thai/
Cambodia Expats Online: Bringing you breaking news from Cambodia before you read it anywhere else!


Facebook user Thanawat Vinitpairoj posted photos along with a message which read, “Late in the afternoon while I was taking photos of two Australian women and their child on Karon Beach,

Doesn't sound at all creepy.