Jamie's idol Sorn Seavmey is fighting today in the World Champs. She doesn' t sound very confident about her chances though. Don't know what time she's on, and it might have been this morning already, but there are some links below if you want to check it out. 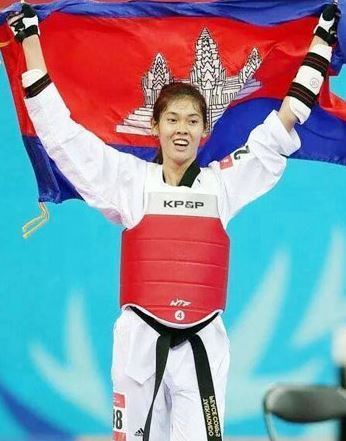 Cambodian sport's poster girl, Sorn Seavmey, takes to the mat at the World Taekwondo Championships in Muju, South Korea today pleading with her fans not to get their hopes up.
The 2014 Incheon Asian Games gold medallist said that the quality and quantity of competition at the Muju Championships would be a severe test.

“While the Olympic Games were of course difficult, there we had only a round of 16 qualifying. Although it was intense it was a small pool of fighters,” she said.
“Here there are more than 50 fighters. We can't be complacent at this level and play around too much. Many of the other countries here are rich. I hope my fans don’t make it difficult for us. We know we have dreams of being able to compete with richer nations but we have to be realistic.”
Seavmey also stressed that she will have to play very carefully after suffering a recent knee injury, which has not fully healed.

She will meet the higher-rankled Egyptain Farouk Maisoun today and if she can cause an upset, she has a chance to face hometown favourite Oh Hye-ri in the round of 32.
It isn't clear exactly what time Seavmey will take to the mat but the morning session runs from 7.30am to 10.30am Cambodian time and resumes at noon.

The World Championships are being televised live by World Taekwondo on Youtube and the link for Seavmey's court is
If that link does not work, go to http://www.worldtaekwondo.org/competiti ... 2017/live/ and look for ‘W-73kg’.

So, how did Sorn Seavmey do against the Egyptian fighter ? Did she get through or not ? Anyone ? Jamie ?
Top

Anchor Moy wrote: So, how did Sorn Seavmey do against the Egyptian fighter ? Did she get through or not ? Anyone ? Jamie ?

"Earlier in the day, Seavmey stayed boldly aggressive in her fight against Maisoun Farouk, beating the Egyptian by way of double disqualification 9-6 in the round of 32.
The taller and slightly heavier Seavmey picked up three points each in the three two-minute rounds as Maisoun Farouk often found herself passively defending."
[Link below.]

Though Cambodia’s first ever Olympic qualifier and first winner of an Asian Games gold medal for the Kingdom in 70 years matched her illustrious rival in height at 6 feet, the 21-year-old Seavmey was no match to the 29-year-old South Korean when it came to an aggressive approach...
http://www.phnompenhpost.com/sport/kore ... ey-last-16
Cambodia Expats Online: Bringing you breaking news from Cambodia before you read it anywhere else!

Users browsing this forum: No registered users and 22 guests