June 7, 2019
Widow struggles to feed family following her husband’s murder
Sok Chanroeun is struggling to make ends meet and support her four children following the murder of her husband Hoem Chan, who was allegedly killed by two Japanese nationals in Siem Reap earlier this year. The two accused were charged in March with premeditated murder and Ms Chanroeun is also seeking compensation.
[excerpts]
Slakram commune, Siem Reap province – Sok Chanroeun sits on a wooden bed in front of her house in Boeng Daun Pa village as she talks about how her family has found it difficult to make ends meet since her husband was killed in March.

Ms Chanroeun, widowed at 38-years-old, is now the sole breadwinner for her four children. She says her husband, Hoem Chan, was a 41-year-old taxi driver before he was killed earlier this year.

“Now there isn’t as much money for my family as when my husband was still alive,” Ms Chanroeun says. “He was able to make more but now I have to do it alone, while my children need more than $2.50 each per day.”

She notes that when her husband was alive, he could make more than $25 per day on average from being a taxi driver.

However, the Japanese embassy as well as Japanese humanitarians have provided money to support her family, she notes.

“The Japanese embassy is supporting my family with $240 per month for seven years,” Ms Chanroeun says.

She adds that the Japanese association in Siem Reap city also contacted her and told her that they will help her children learn the Japanese language until they complete all levels and then help them find jobs.

Ms Chanroeun and her late husband borrowed $15,000 from a bank and also borrowed additional money from friends to buy the SUV Highlander Mr Chan used to drive. She says he had it for five months before he was killed.

She says other parties have also provided monetary support, noting that a Akihiro Kato, CEO of Angkor Tiger FC and a Japanese national, provided $4,050 for her husband’s funeral, the Japanese consulate in Siem Reap city provided $700, while other provincial officials also provided money for the funeral.

“I think that it’s so sad and the family is facing difficulties,” Mr Akihiro said. “It was Japanese who caused this pain, so I want to help that family and provide some peace of mind.”

Khiev Sort, Siem Reap city’s Slakram commune chief, says that during the funeral in March, Bun Rany, president of the Cambodian Red Cross, ordered a representative to bring $740, and some food and equipment for the victim’s family...

Ms Chanroeun adds that after her husband was killed, she filed a complaint to the court and demanded compensation from the suspects.
“I ask the court to punish the suspects in accordance with the law and I demand $100,000 from the two suspects because I don’t have my husband to support our family any more,” Ms Chanroeun says.
Full article: https://www.khmertimeskh.com/50612021/w ... ds-murder/
Cambodia Expats Online: Bringing you breaking news from Cambodia before you read it anywhere else!

What the two Japanese dudes did is despicable. They should rot in jail until they die.

Now, taxi lady is out of her mind. First of all, why have 4 kids if you can't feed them? Didn't her and her husband have a plan b? Her and her husband borrowed $15k from the bank and more money from friends and family? How were they planning on paying that back making $25/ day and feeding four kids?

She should be happy the Japanese are helping her out. My government/ people would've not given two shits about her, her dead husband and her kids.

She's asking $100k from the Japs that killed her husband. Weren't those two sought after in Japan for not settling their debts? I get that the pain and the lack of income must be unbearable, but maybe instead of trying to get the best out of this situation, she could work? Maybe.
Top

Yeah....And a plan C too...Stupid couple!
Do the right thing, get a job ...[Admin Edit: Cleaned up a bit and deleted an ensuing flame war.]
Top 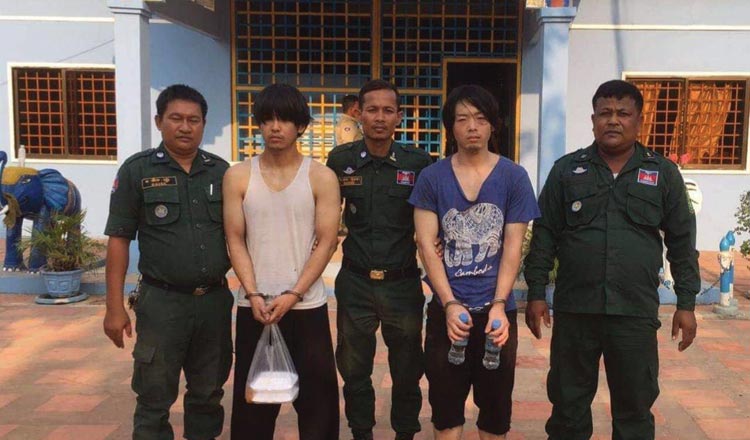 Siem Reap Provincial Court on September 9 will try two Japanese nationals over the killing of a taxi driver and stealing of his vehicle in the province.

“The provincial court will try the case of two Japanese nationals, who killed a taxi driver,” he said.

In March, the court charged Ishida Reimon and Nakakuri Ryuji, both 24, with premeditated murder for allegedly killing Hoem Chan, 41, while they robbed him of his taxi.

They were arrested by police shortly afterwards when they crashed the vehicle.

Theng Chamroeun, a lawyer for the two accused, yesterday said he received the information that the court will try his clients.

“I will attend to defend my clients on that day because I am not busy with another case,” he said.

Sok Chanroeun, 38, Mr Chan’s wife, yesterday said she was informed about the trial on Sunday.
“My lawyer and I will attend the hearing on September 9 at the provincial court,” she said.

Ms Chanroeun noted that she will maintain her attempt to seek compensation from the two Japanese men.

“I will still demand $100,000 in compensation from them because I don’t have my husband to support our family any more and I want the court to punish them in accordance with the law,” she added.
https://www.khmertimeskh.com/50639614/c ... -japanese/
Cambodia Expats Online: Bringing you breaking news from Cambodia before you read it anywhere else!

UPDATE: The trial of the two Japanese murder suspects, ISHIDA REIMON and NAKA RYUJI, was ajourned following a short hearing before a judge at Siem Reap provincial court today, 9 September 2019.

The two men admitted to stabbing and killing the victim, taxi driver Hoem Chan, on March 17, 2019, but in their defense their lawyer has asked for the murder charge to be reduced to involuntary manslaughter, because they didn't kill him on purpose.

The victim's wife told the court that she wants US$100,000 in compensation, as well as a stiff jail sentence for her husband's killers.
Cambodia Expats Online: Bringing you breaking news from Cambodia before you read it anywhere else!

, Nahh,not enough ,go for $ 200,000 USD,its got a much better sound to it , , , and , its well known Japanese ( like most Westerners ) are loaded with money ,in fact they are virtual walking A T Ms .
I will be more than happy to negotiate the speedy compensation transfer ,for a minor , % 25 fee ,Net.+ expenses of course. My underlings/minions will be around to facilitate the cash bonus /windfall in 20 minutes.
Regards Mr Mark ( 25% )Robinson.
"The Truth ,The whole truth " & nothing but the T R U T H ,Galbelly for the Defense.

In March, Siem Reap provincial court charged Ishida Reimon and Nakakuki Ryuji, both 24, with premeditated murder over the killing of Hoem Chan, 41, while they robbed him of his taxi.

Yin Srang, Siem Reap provincial court spokesman, today said that Mr Nakakuki was sentenced to 13 years in prison while Mr Ishida was handed down with 10 years in jail over the killing of Mr Chan.

“The Siem Reap provincial court decided to order both men to pay 100 million riels [about $25,000] to the victim’s wife,” Mr Srang said.
https://www.khmertimeskh.com/50647646/t ... xi-driver/
Cambodia Expats Online: Bringing you breaking news from Cambodia before you read it anywhere else!