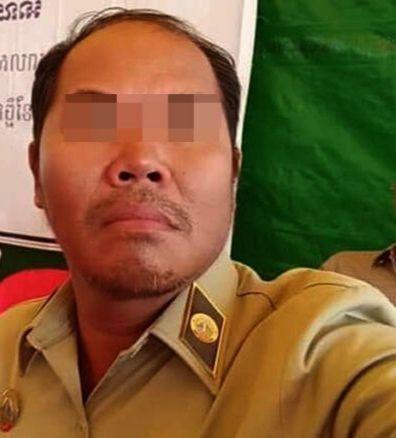 The deputy commissioner confirmed that after receiving the victim's complaint, the provincial commissioner and the prosecutor ordered the officer to go to the scene to investigate and investigate the case. But the fisheries officer, identified as Khin Nyi (or Khieu Nyi) had already escaped.

The victim told the cops that on the night of the incident, they were traveling with three other people on two canoes, when they came accross the boat of the fisheries officer. He said that the officer appeared to be blind drunk and he fired off two shots from his pistol in their direction without any warning.
He said that after firing the two shots, the officer came over to look at them, yelled at them, and fired one more shot before driving his boat off in a drunken manner.

Mr. Chuy Vat (victim) confirmed that his boat was being towed by another boat because he had no light and he had asked for help. [It seems that it is an offense to be towing boats at night in this area.]

However, since the shooting incident, many local people have spoken out against this officer, Khieu Nyi, saying that he is known for shooting at fishermen and extorting them for money for himself. They said that the man is dangerous and violent, and that when the official seized any illegal catches from local fishermen, he did not release them or report to the authorities. Instead, he would keep the big fish to eat for himself, and the smaller fish were used to feed his crocodile farm.
Unfortunately, on this morning of January 10, the press could not ask for clarification from the accused Fisheries Officer because he has disappeared, and local sources say it is likely that he has made his escape to Phnom Penh.

Brigadier General Jit Vannny said that even if the accused officer did not appear at his office, the deputy commissioner confirmed the victim's complaint, and legal action will be taken.
Cambodia Expats Online: Bringing you breaking news from Cambodia before you read it anywhere else!