Breaking news from Cambodia can be found here. CEO often finds Khmer news and translates it into English for our readers if it is interesting to expats, locals, Cambodians living abroad and anyone who wants to stay informed of the latest local and international news stories about Cambodia and our neighbors in South East Asia. There are many sources for Khmer news articles and they can all be found here in one place. Most of the media comes out of Phnom Penh, Siem Reap or Sihanoukville, but we cover national Cambodian news from all provinces.
Post Reply Previous topicNext topic
51 posts

Can't wait to watch the "Netflix Original Series" on this guy!
Top

More Chinese tea !
In another large Cambodian drug bust this year, three Nigerians were arrested on 30 July 2019 with 20kgs of crystal amphetamine, which was again found wrapped up in the ubiquitous Chinese tea packaging.

Three Nigerians arrested with 21 bags of drugs in Cambodia .

The Hunt for Guanyinwang Tea Methamphetamine Busts
CEO News
From the OP article:

One telling discovery: a screenshot of a slip from an international courier company recording the delivery of two consignments of packaging, manufactured to hold loose-leaf Chinese tea, to a Yangon address. Since at least 2012, tea packets, often containing one kilo of crystal meth each, had been cropping up in drug busts across the Asia-Pacific region.

For regional counter-narcotics police, the revelations upended their assumption that the drugs were being trafficked by different crime groups. It became clear the shipments were the work of just one organisation.

It all looks very connected. At each mega-drug bust involving methamphetamine in South East Asia this year, whether in Malaysia, Philippines, Vietnam or Cambodia, the crystal methamphetamine is always packed in these Guanyinwang tea bags. Since coincidence on this scale is unlikely, the conclusion must be that this same huge Chinese drug syndicate, " The Company", is also responsible for the vast quantities of methamphetamine that are flooding into Cambodia.
The amount of drugs seized in one week in March 2019, in three enormous busts in Malaysia, Philippines, and Vietnam, is a staggering 2520 kilograms. (See below for details.) 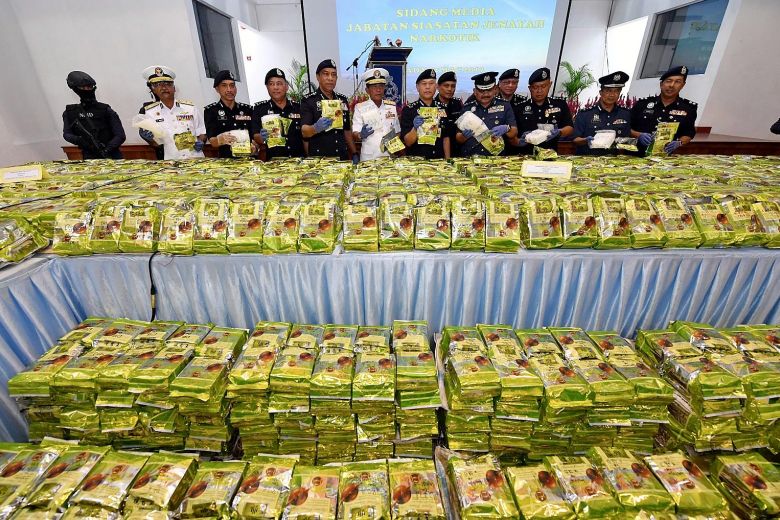 Malaysian drug busters with the seized 2,060kg of drugs believed to be syabu, or crystal methampheta-mine, disguised as Chinese tea.PHOTO: BERNAMA
Mar 23, 2019, 5:00 am SGT

The drugs were packed to look like Chinese tea packets.

The bust is the biggest drug haul in the history of Malaysian police, the federal police's Narcotics Crime Investigation Department director, Commissioner Mohamad Salleh, was quoted as saying by The Star newspaper.
He said the drugs, disguised as Guanyinwang Chinese tea, were believed to be from the "Golden Triangle" countries of Cambodia, Myanmar and Thailand.

Mr Mohamad said the syndicate has been around for some time, and that apart from the domestic market, the drugs were also meant for distribution in Indonesia, Singapore, the Philippines, South Korea, Australia, Japan and New Zealand.

Meth worth $28m seized in upscale enclave near Manila 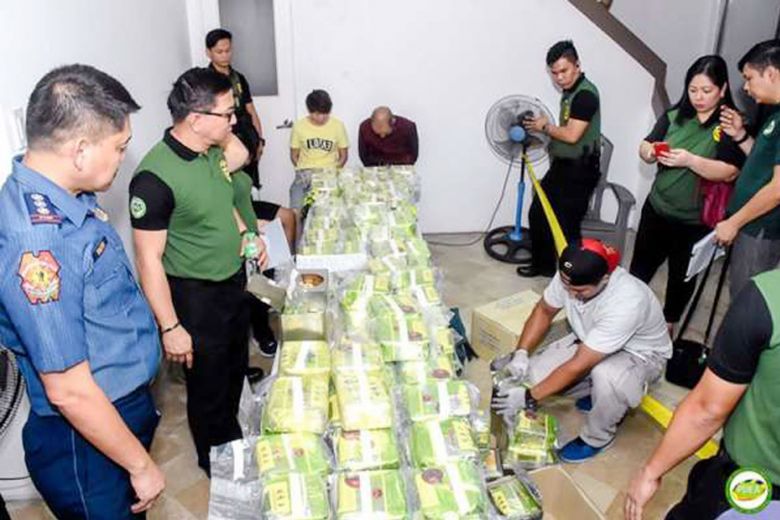 Mar 22, 2019, 5:00 am SGT
Philippine drug enforcers have seized around 160kg of methamphetamine valued at more than 1.1 billion pesos (S$28 million) at an upscale enclave just south of the capital Manila where prominent lawmakers, politicians, celebrities and business executives live under tight security.

Three Chinese nationals and a Chinese-Filipino interpreter were arrested late on Tuesday in separate raids in Ayala Alabang Village, a posh gated community in Muntinlupa city, and at a nearby shopping mall. Those arrested were Go Kei Kei, 40, Chua Kian Kok, 43, Wu Yi, 19, and their interpreter Emmanuel Pascual, 79.

The drugs, a powerful methamphetamine locally known as shabu, were concealed in tea wrappers and biscuit cans, similar to those in seizures in Malaysia, Thailand and Myanmar.

Philippine Drug Enforcement Agency chief Aaron Aquino said this suggested that an international syndicate running drugs through the notorious "Golden Triangle", which straddles the borders of Laos, Thailand and Myanmar, was behind the trafficking.
https://www.straitstimes.com/asia/se-as ... ear-manila 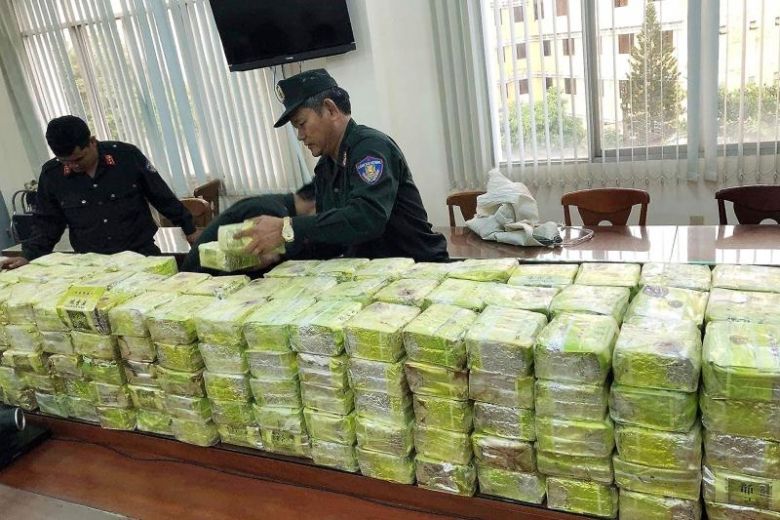 Around 300kg of methamphetamine was seized by Vietnamese police during the operation in Ho Chi Minh City.PHOTO: AFP

Police on Wednesday stormed the luxury property in Vietnam's largest city, guarded with private security and outfitted with cameras, during an hours-long raid which unearthed methamphetamine believed to have been smuggled in from Laos.

Around 300kg of methamphetamine was seized, and images in the press later displayed dozens of bricks of drugs.

Always wondered why i felt a bit uplifted after the tea ceremony with my Chinese Suppliers...
Top

It must be difficult for criminals to operate in such a high surveillance environment.
Unless it has state sanction.
Top

That makes a total of 93kgs of Chinese tea methamphetamine seized in three days.
newsworthy/kilos-drugs-seized-kampong-t ... 33290.html
Cambodia Expats Online: Bringing you breaking news from Cambodia before you read it anywhere else!

They don't half appear to like this Meth stuff over here !!!, personally an espresso first thing in the morning make me a bit twitchy, no wonder they all go a little mad. 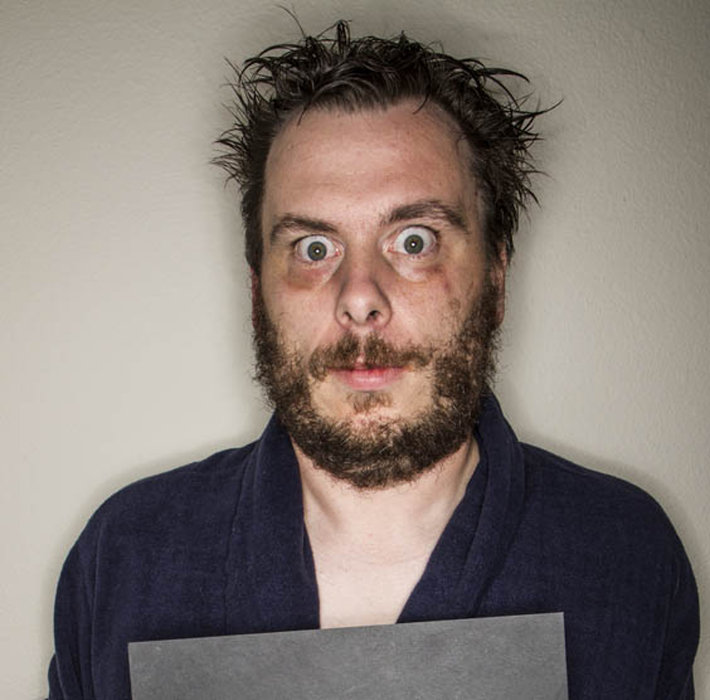 It does have its downsides at the GSM perhaps....

Talking about before and after take a look at what it did to this young lady !!!!! 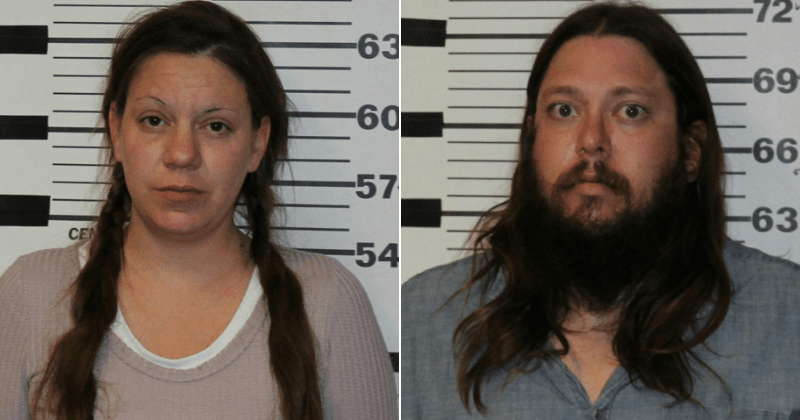 You never quite know what it's been cut with !!!