WARNING: Some of the photos of the scene may be disturbing. 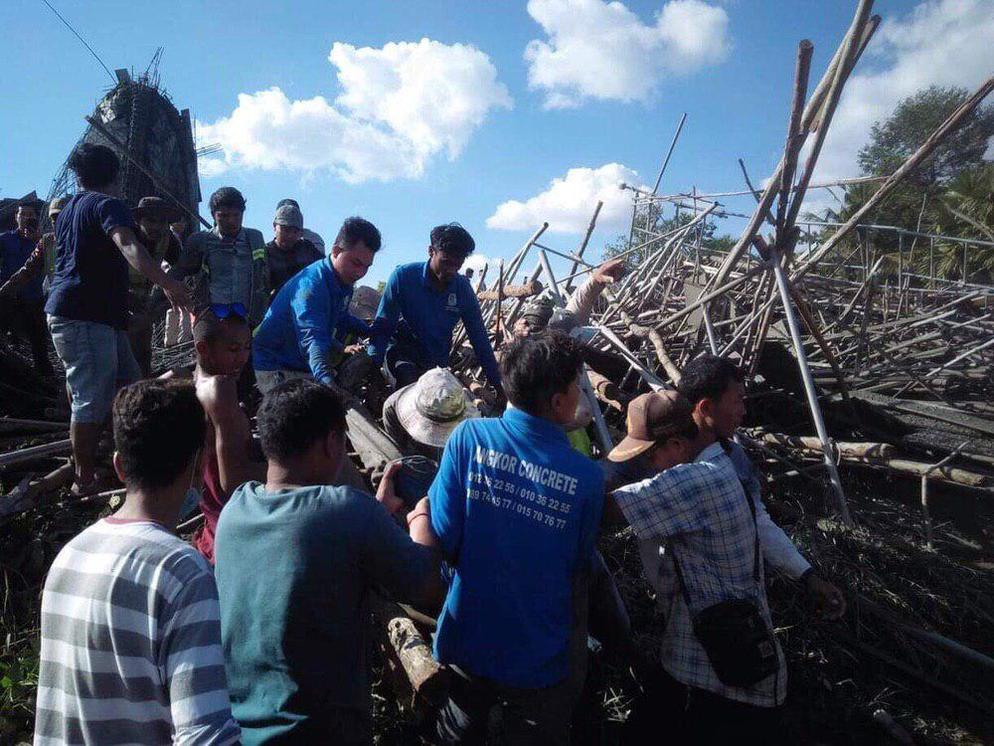 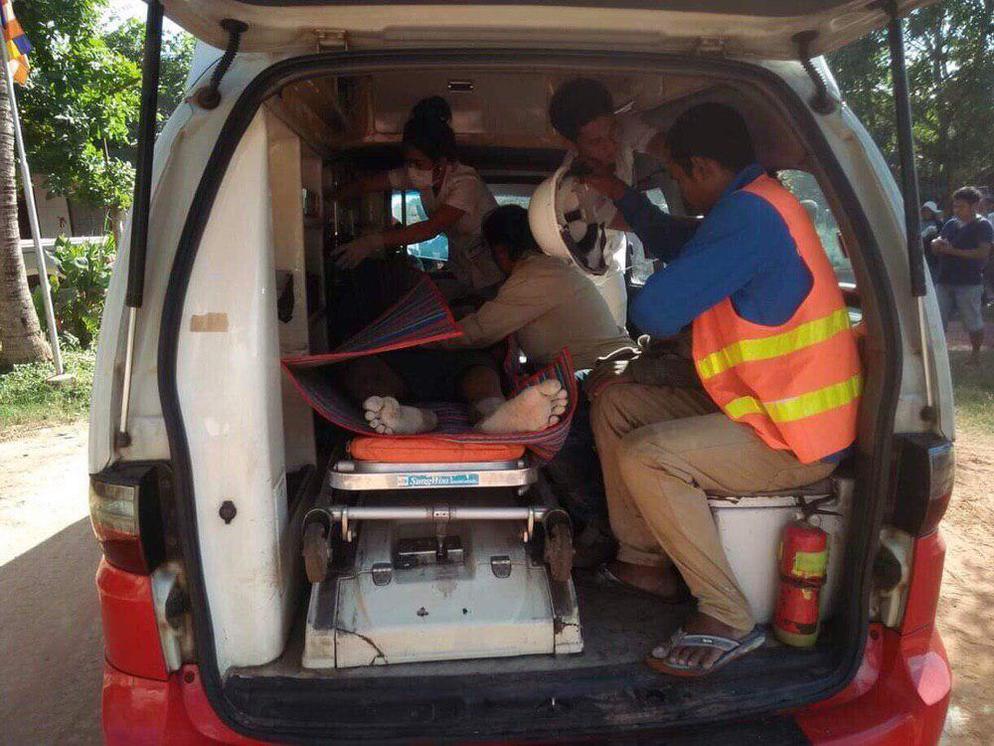 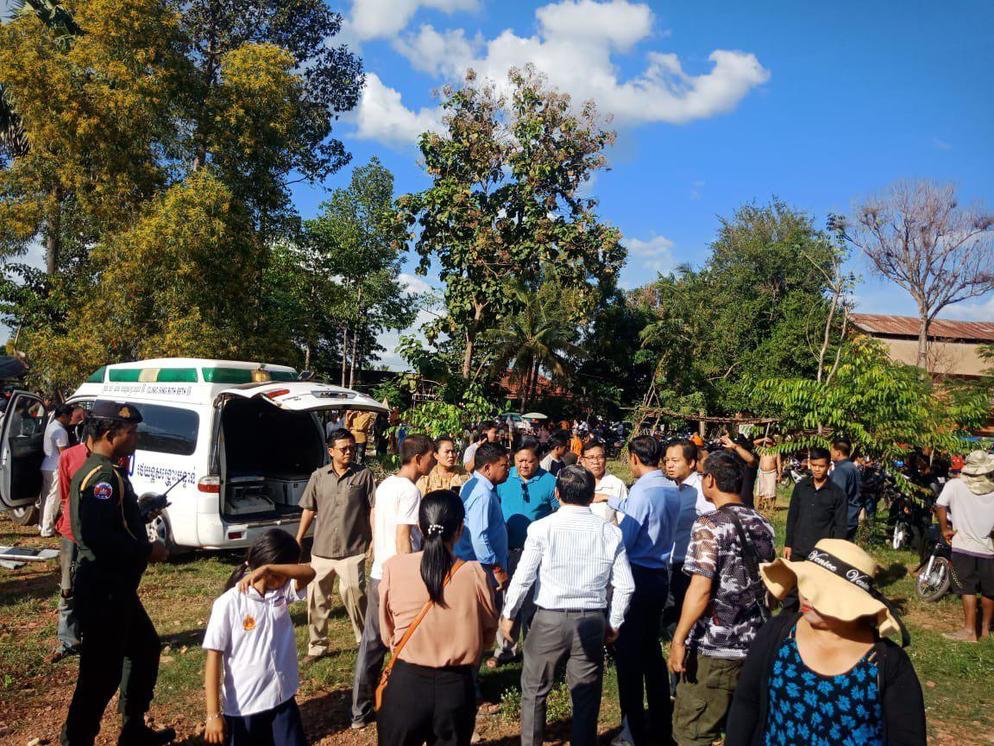 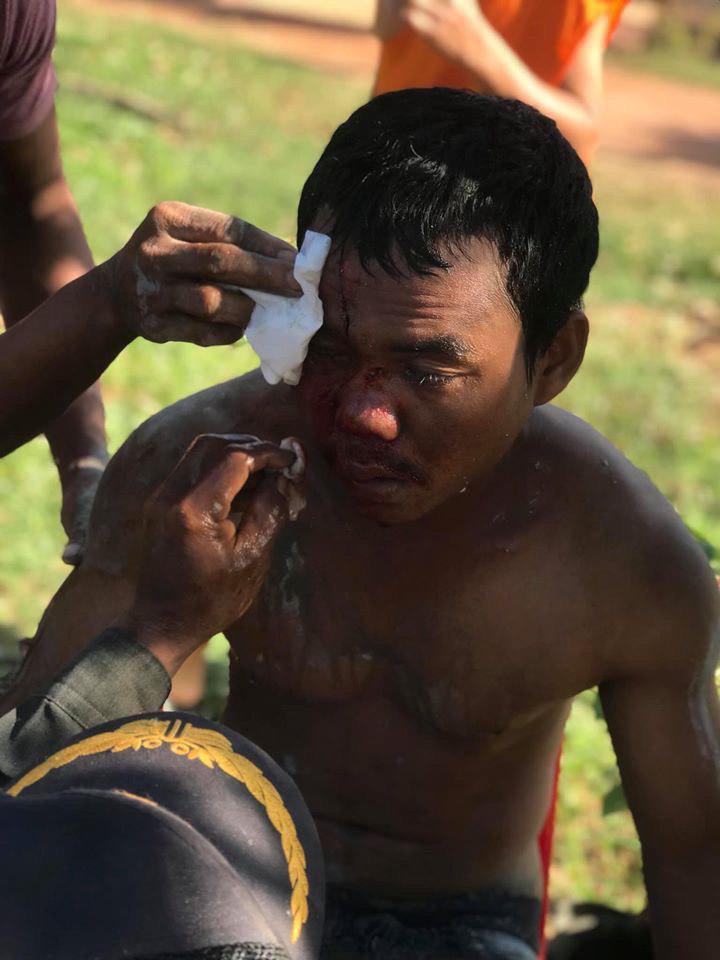 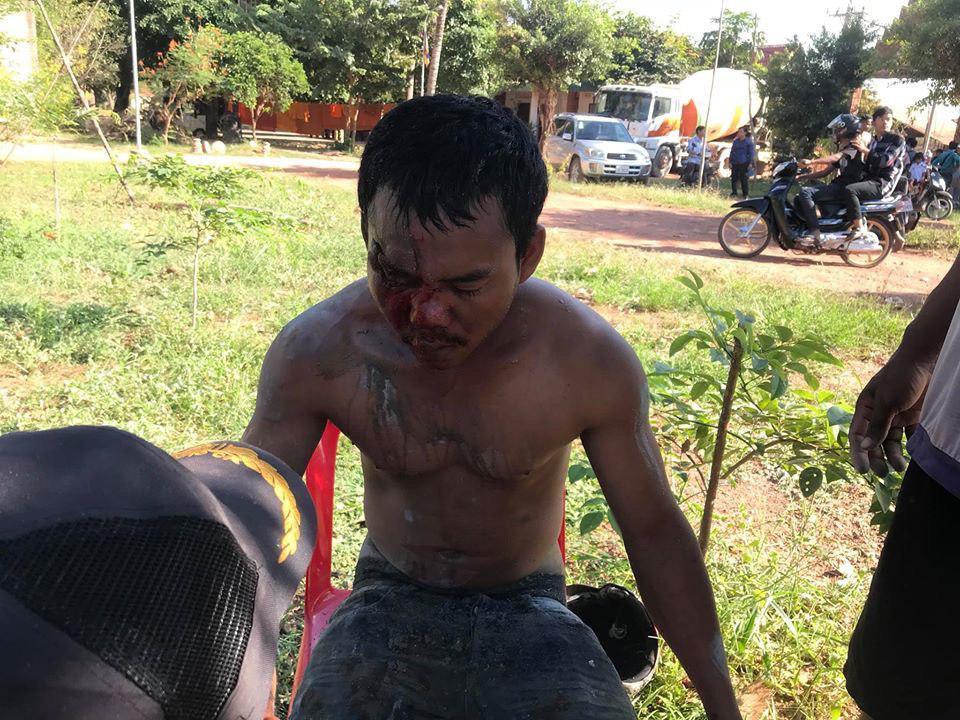 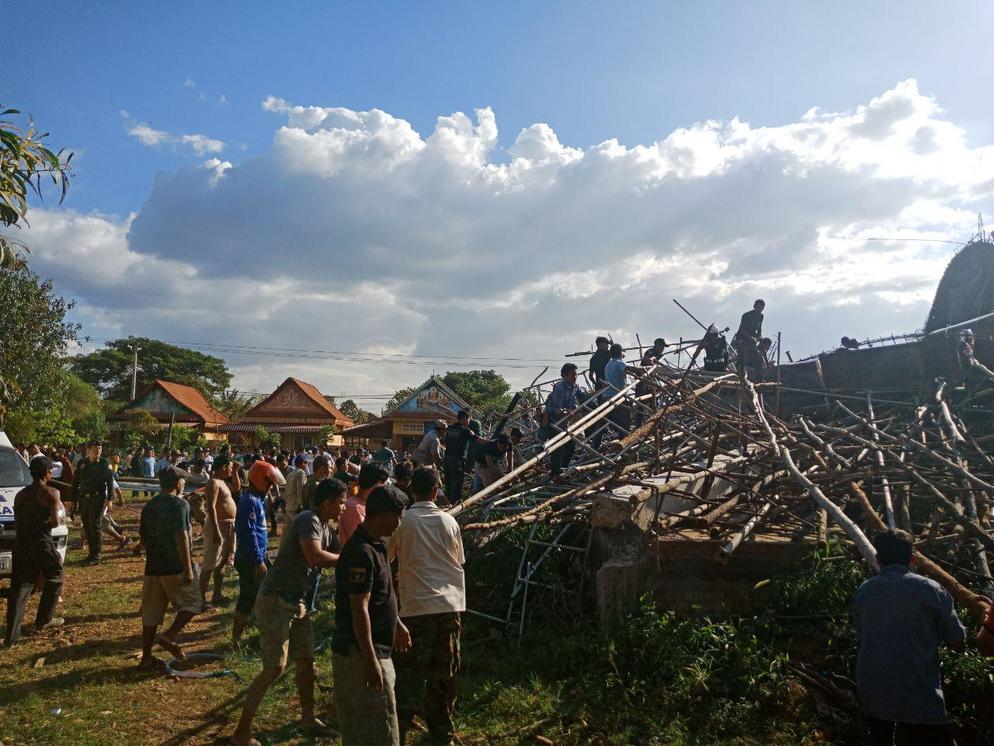 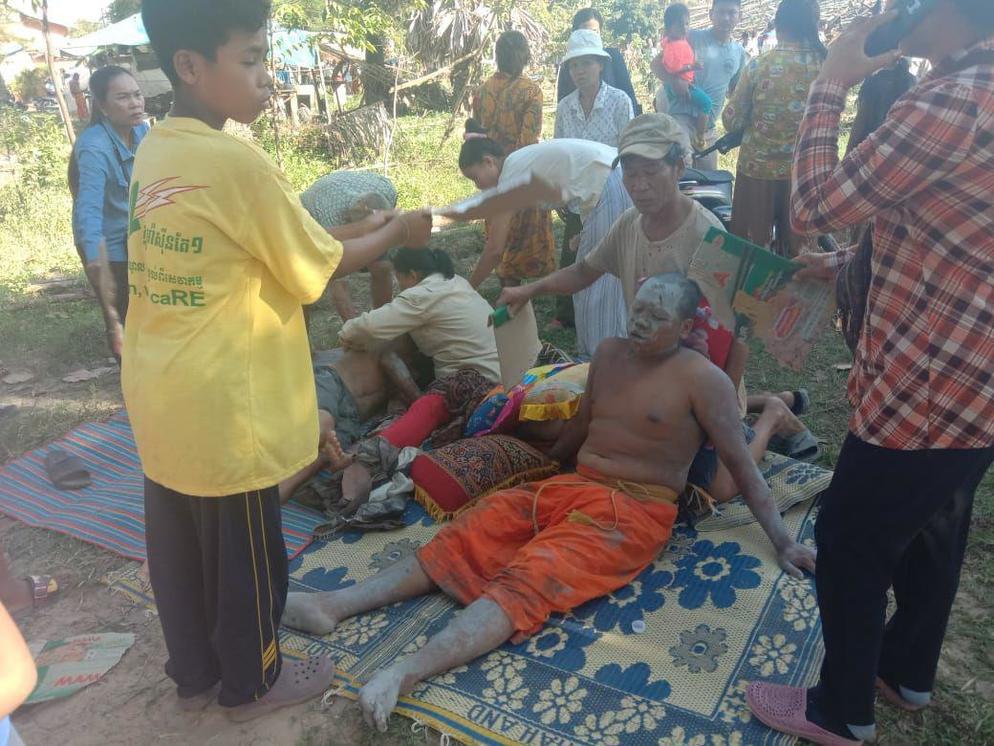 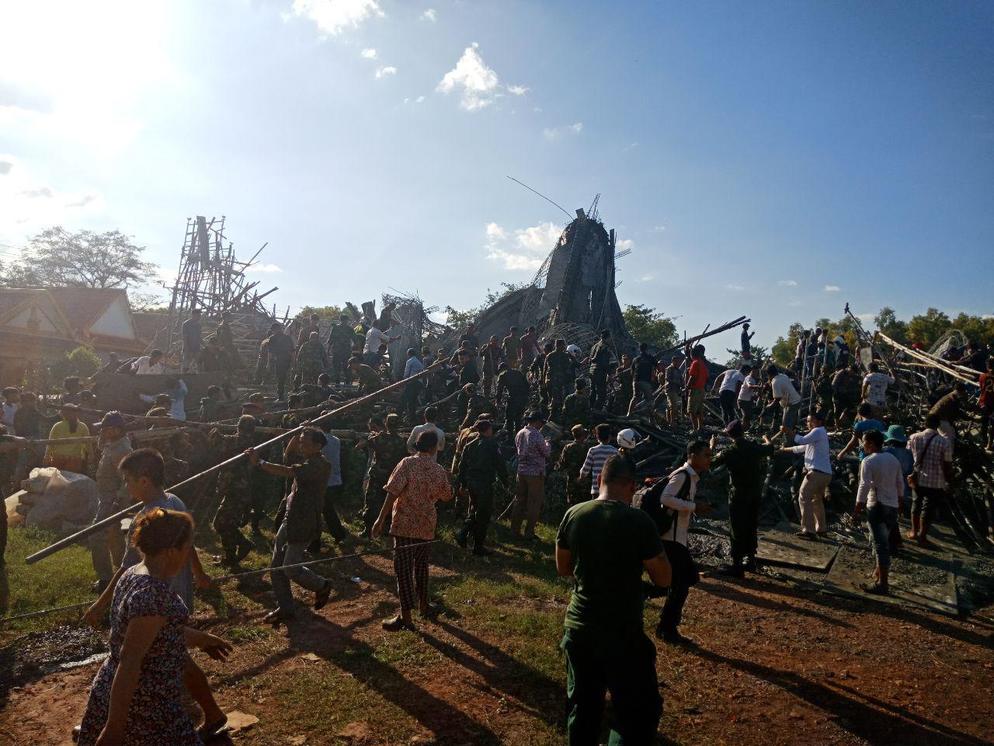 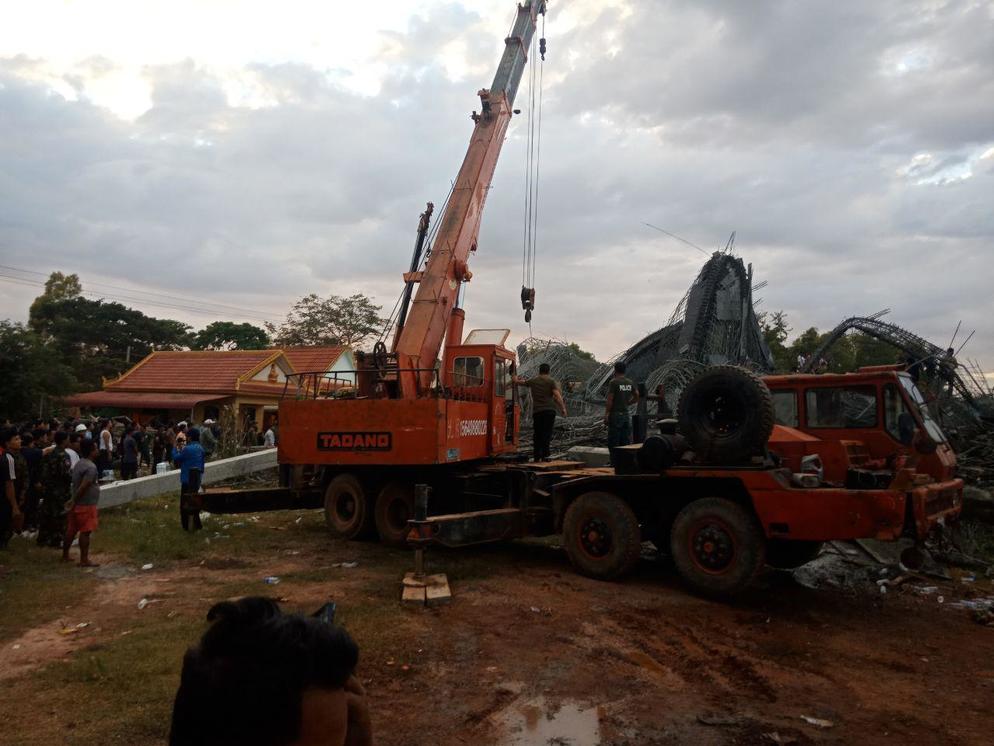 December 4, 2019
Survivor blames wooden scaffolding for collapse
A survivor of Monday’s deadly collapse at a construction site of a temple in Siem Reap province yesterday blamed the accident on the use of wooden scaffoldings instead of metal to support concrete work.

The temple building in Prasat Koukchak pagoda in Siem Reap city was under construction when it completely collapsed on Monday afternoon. The collapse killed three people and injured 16 others.

Phlong Chantha, 25, a construction worker who sustained injuries to his hands and body during the incident, said more than 20 workers were pouring concrete to build the roof but it gave way once the work was nearly finished.

“It started to collapse from the centre point first. I saw it happening and was about to jump but could not make it on time,” he said. “The debris buried me up to my head so I was able to breathe. I shouted for help and it took more than half an hour before I was rescued.”

Mr Chantha, who has four years of experience in construction, said that the collapse might have been caused by technical problems since wooden scaffoldings were mostly used in the building to support concrete work.

“I did not want to do it [construction work] at first, but because the construction supervisor asked me to help the monks, I later agreed,” he added. “I saw that the wooden scaffoldings used to support the concrete were thin [similar to wrist size] and there were very few metal scaffoldings being used.”

“Another thing is that the wooden scaffoldings had been left in the open for seven to eight months before they called us to pour concrete. Some of them might have decayed due to the sunlight and rain,” Mr Chantha noted.

Venerable Thy Sokhon, a monk at the pagoda who suffered leg and chest injuries, yesterday said that he had been watching the construction work when the building collapsed.

He noted that the foundation for the building was laid several years ago and pillars were installed last year.

Ven Sokhon said that due to a lack of budget, the project was temporarily halted. Work to put in a concrete roof only started a few days ago.
“I do not know how much money has been spent on this building,” he said. “We are constructing this building in stages because our pagoda does not have enough budget and depends on donations.”

Meanwhile, Siem Reap provincial authorities yesterday completed clearing the debris and confirmed that three people died and 16 others were injured.

Provincial Governor Tea Seiha said the debris was cleared by yesterday morning and no more victims were found.
“The number of victims is confirmed as 19, with three deaths,” he noted.
https://www.khmertimeskh.com/50666715/s ... -collapse/
Cambodia Expats Online: Bringing you breaking news from Cambodia before you read it anywhere else!

A construction supervisor is being blamed for negligence by police over the collapse of a temple under construction at Prasat Koukchak pagoda in Siem Reap province on December 2nd that killed three people and injured 16 others.

“We are accusing the construction supervisor as the person responsible for the collapse,” Brig Gen Chendareth said. “However, no court has charged him. We have just accused the construction supervisor and sent a case file to the court for court officials to evaluate.”
https://www.khmertimeskh.com/50670711/p ... n-manager/
Cambodia Expats Online: Bringing you breaking news from Cambodia before you read it anywhere else!

You can see on some pics on other news media that it was built on top of an existing building foundation (maybe demolished and just the groundwork left). The steel for the columns was just tied to the old steel - not embedded or drilled in and grouted - no cage - nothing. It was bound to happen just looking at it. Criminal negligence and not just the supervisor's fault. The person who drew the plans and the structural engineer who signed off the calculations are to blame. Also the scaffold team. The supervisor is a scapegoat.