Cambodia Breaking News (Phnom Penh): On the night of 20 June, until the early hours of the next day, police surrounded an apartment, no. 107, in Borey Jib Mong, in Khan Sen Sok, searching for armed Chinese and Cambodian men wanted for a kidnapping in Khan Toul Kok.

However, when police entered the apartment, the suspects had already flown. Police continued their search for the suspects and arrested two men later that evening. Two pistols were confiscated by police. Another man is also being held by police.
None of the three men have been identified so far, but the arrests were all in connection with an organized crime gang who have been kidnapping Chinese nationals and holding them for ransom. 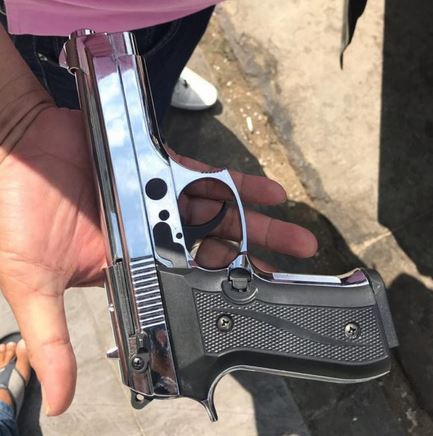 On 17 June 2019, 3 men were arrested in Poipet for kidnapping a Chinese national in Phnom Penh, and it is possible that this latest manhunt by police is connected to the arrests earlier this week, but that has yet to be confirmed.
newsworthy/men-arrested-poipet-for-phno ... 29664.html
Cambodia Expats Online: Bringing you breaking news from Cambodia before you read it anywhere else!

Re: Police Surround Phnom Penh Apartment in Search of Kidnappers

That pistol looks somewhat fake. But I could be wrong.
Top
Post Reply Previous topicNext topic
2 posts • Page 1 of 1