Breaking news from Cambodia can be found here. CEO often finds Khmer news and translates it into English for our readers if it is interesting to expats, locals, Cambodians living abroad and anyone who wants to stay informed of the latest local and international news stories about Cambodia and our neighbors in South East Asia. There are many sources for Khmer news articles and they can all be found here in one place. Most of the media comes out of Phnom Penh, Siem Reap or Sihanoukville, but we cover national Cambodian news from all provinces.
Post Reply Previous topicNext topic
54 posts

PHNOM PENH: A Cambodian woman was sentenced to six months in prison on Friday after a court ruled that her Facebook Live streams selling clothing and cosmetics while wearing skimpy outfits amounted to pornography, women’s rights groups said.

Ven Rachna, 39, was arrested in February, two days after Prime Minister HE said in a speech that some online vendors were encouraging sexual assault and disgracing Cambodian culture by wearing scanty outfits.

Having been jailed since her arrest, Rachna will go free early next month, local media reported, with the remainder of her sentence suspended.

Court officials could not be reached for comment, while women’s rights groups were unclear about the release date.

“The big issue here is not the amount of time she spends in prison, but the policies behind her being charged in the first place,” said Ros Sopheap, head of the charity Gender for Development in Cambodia.

“Is this what we classify as pornography now?”
https://www.bangkokpost.com/world/19069 ... py-outfits
Cambodia Expats Online: Bringing you breaking news from Cambodia before you read it anywhere else!

but she will only serve 2 months and 15 days

Only, for wearing something that's acceptable in thousands of businesses in KOW

You made me do it!
Top

She pissed off her old beau, that's all. She was dodgy.
Got forbid the powers that be ever install Tik Tok on their phones.

CEOCambodiaNews wrote: ↑Wed Feb 26, 2020 7:50 am Is this clampdown on sexy sellers a breach of their human rights, or an attempt to stop "sexploitation" of Khmer women ? Is this ban a good thing for Cambodian women, or is it yet another method of controlling women in Cambodian society ?

huh?
it's pretty obvious it's the fury of a jealous ex-boyfriend
can we put name to the photos?
.

Heading up this new puritanical council is Culture Minister Phoeurng Sackona, the front woman of the campaign. But clearly, the initiative is being led by Prime Minister HE.

On February 17, he instructed the government’s Cambodian National Council for Women to track down online vendors and “order them to stop live-streaming until they change to proper clothes.” Dressing provocatively to sell clothes, he claimed, apparently not understanding decades of advertising, “is a violation of our culture and tradition.”
https://asiatimes.com/2020/05/cambodias-new-puritans/
Cambodia Expats Online: Bringing you breaking news from Cambodia before you read it anywhere else! 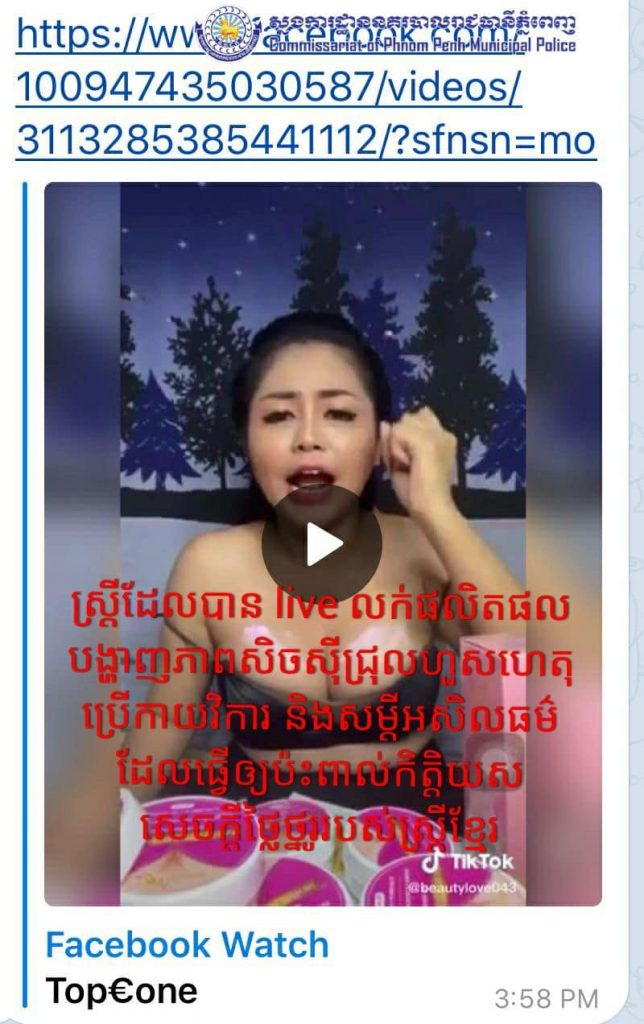 Cambodia News,(Phnom Penh): A woman has been selling lotion on her Facebook account named J No Cosmetic with a very sexy video using immoral gestures. She was appropriately summoned by the authorities to publicly apologize and make a contract promising that she will not do it again. 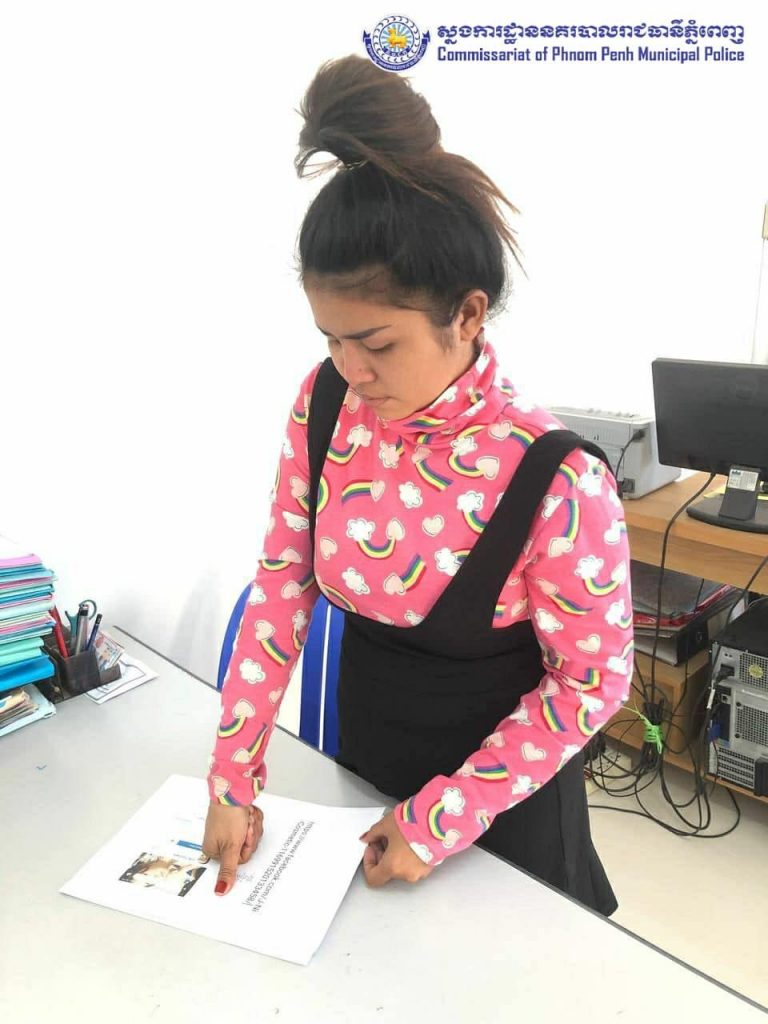 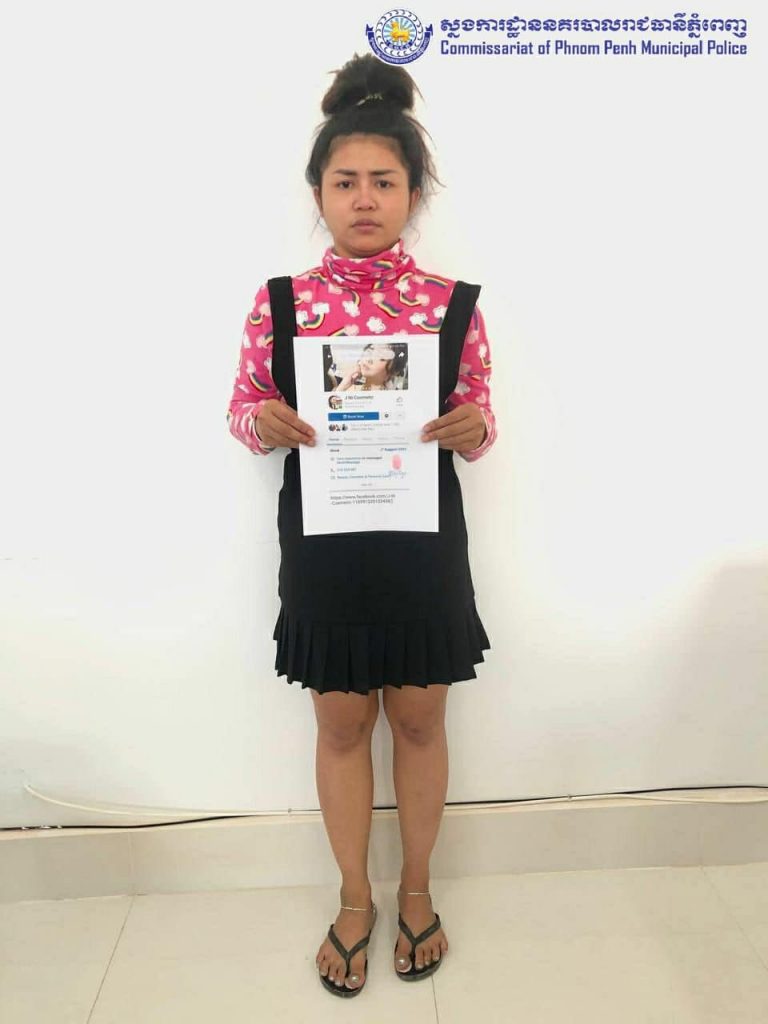 Sexy is not the immediate thing that comes to mind when I see these coarse screaming banshees clogging up FB trying to sell sub standard toxic make-up.

Morticia showed me her livestream and I was like, ya, she will be signing something soon...

She was rubbing cream on her breasts and under her dress top, giving them a good squeeze in the process.
===============
We are all puppets in the hands of an insane puppeteer...
--Brother Theodore
Top
Post Reply Previous topicNext topic
54 posts