Breaking news from Cambodia can be found here. CEO often finds Khmer news and translates it into English for our readers if it is interesting to expats, locals, Cambodians living abroad and anyone who wants to stay informed of the latest local and international news stories about Cambodia and our neighbors in South East Asia. There are many sources for Khmer news articles and they can all be found here in one place. Most of the media comes out of Phnom Penh, Siem Reap or Sihanoukville, but we cover national Cambodian news from all provinces.
Post Reply Previous topicNext topic
73 posts

Phnom Penh, Cambodia: For months now, a single, rare Irrawaddy river dolphin, apparently entangled in a fishing net and disoriented, has been spotted in Southeast Asia’s struggling Mekong River, far from its normal habitat in northern Cambodia. Conservationists are scrambling to come up with a plan to help the critically endangered animal before it’s too late, but time is running out.

Dolphins sometimes play metaphorical roles in Cambodian folklore. This one, astray and fading, could be an analogy for how the Mekong has lost its way. As the fate of the dolphin hangs in the balance, so does the future of the Mekong, with signs growing increasingly stronger that a river sustaining one of the richest ecosystems on Earth is being strangled on a basin-wide scale.

For years people have warned that an environmental crisis looms along the 2,700-mile-long waterway, which runs through six Asian countries. The Mekong could not withstand the onslaught of dam building, overfishing, and sand mining forever, they argued. Yet somehow the river has, so far, powered through, delivering an almost indescribable bounty to the more than 60 million people who depend on it for their livelihoods. (Dramatic photos show how sand mining threatens a way of life in Southeast Asia)

Then, in 2019 things took a turn for the worse. It started when critical monsoon rains failed to arrive as usual in late May. As drought gripped the region, water levels in the Mekong dropped to their lowest in 100 years. The rains finally came, but they didn’t last as long as usual, and the drought continued.

In recent months strange things have begun to happen. In some places in the north, the mighty Mekong has slowed almost to a trickle. The water has changed to an ominous color and begun filling with globs of algae. Catches from the world’s largest inland fishery have dwindled, and the fish that are being caught are so emaciated that they can only be used to feed other fish.

“Everywhere you look there are indications that this river, which has provided for so many, for so long, is at a breaking point,” says Zeb Hogan, a fish biologist at the University of Nevada, Reno, and a National Geographic Explorer.
https://www.nationalgeographic.com/scie ... ed-waters/
Cambodia Expats Online: Bringing you breaking news from Cambodia before you read it anywhere else!

When you see what mankind can do you can only keep the fingers crossed for the next virus.
Top

Mainland China holds all the cards. My prediction is that the communist state will eventually squeeze all the other countries in SE Asia into obedience, just like the Kingdom of Wonder. Not this year, or the next. Over the long term.
Top

newkidontheblock wrote: ↑Sun Feb 02, 2020 2:12 am Mainland China holds all the cards. My prediction is that the communist state will eventually squeeze all the other countries in SE Asia into obedience, just like the Kingdom of Wonder. Not this year, or the next. Over the long term.

Maybe they just may do so, but it seems the way they end up in that position because the other countries become in debt, that is due to them being a poor country and see the offering has some progress, or that of the means of greed. China have progressed to trade around the globe, now the with their power, and "yes" certainly a super power with the big runners. But they also are doing a good job of trying to wipe themselves out.
Always "hope" but never "expect".
Top

There are many ways to kill a river. With Southeast Asia's storied Mekong, China's upriver damming is taking a heavy toll, but downstream neighbors share the blame. The No. 1 threat: sand mining.

AUDIE CORNISH, HOST: In Southeast Asia, the famed Mekong River is under threat from upstream dams built by China. Those dams are reducing the flow of water and sediment, but China's downstream neighbors share the blame. Michael Sullivan reports from Cambodia.

YOS MONIRATH: (Through interpreter) The benefit from sand dredging is both direct and indirect. The sand used in the construction industry helps create jobs and grows the economy, and dredging the river helps make it wider and deeper for boat traffic.

SULLIVAN: The downside - in the sand miners' eagerness to extract the sand, not even the dead are safe.

SULLIVAN: That's a boat pumping sand into a barge on the Mekong just 10 yards away from shore in front of the Kdey Takoy temple complex. There's less of the complex than there used to be. Deputy head monk Bean Boren explains why.

SULLIVAN: He says the riverbank started sliding into the river while the boat was pumping sand, taking two of the temple's crypts and the remains inside with it.

SULLIVAN: The monk says he and a few others managed to pry open the crypts and drag the coffins out before they floated away. The abbot was very angry at the sand miners, he says, but the authorities refused to intervene.

HUN VANNAK: It's not modern Cambodia.

VANNAK: Here in Cambodia, it's all about the money, the business, the benefit, not about environments or the people.

SULLIVAN: Because the sand miners, he says, work for companies linked to powerful tycoons with government connections. In theory, they file environmental impact statements and abide by the rules. In reality, critics say, the only rule is making money. Yos Monirath, the government spokesman, disputes this.

MONIRATH: (Through interpreter) We have our hotline for people to inform us of illegal sand dredging. I don't think those allegations are true. We have never received a complaint.
Continued here:
Cambodia Expats Online: Bringing you breaking news from Cambodia before you read it anywhere else!

and up to 160 on minor tributaries
Top

That suggests China is “not letting the water out during the wet season, even when the restriction of water from China has a severe impact of the drought experienced downstream”, Basist said.

But starting in 2012, when the larger of China’s upper Mekong hydropower dams came online, the model and the river level readings started to diverge most years, coinciding with periods of the Chinese dams’ reservoirs filling up during rainy seasons and releasing water during the dry season.

The difference was especially pronounced in 2019, Basist said.

and up to 160 on minor tributaries

He counted them wrong. There are only 3 on the map with another 2 under construction. The white ones with a black outline are planned, as in they don't exist yet. 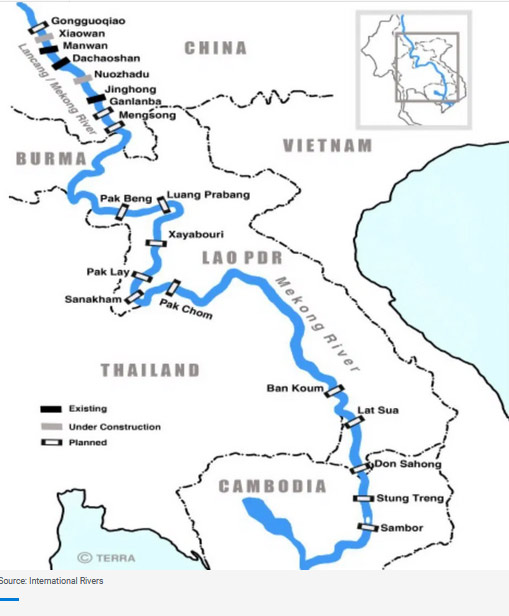 Interesting but it still shows very few completed dams along the Mekong. Of course damming the tributaries will be a big issue.
Silence, exile, and cunning.
Top
Post Reply Previous topicNext topic
73 posts