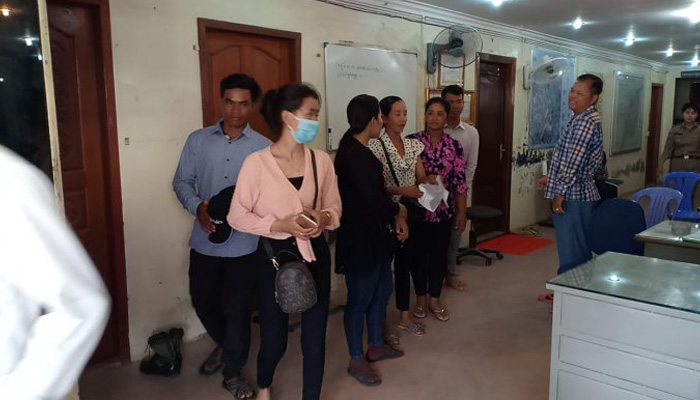 Phnom Penh, Cambodia Breaking News: On10 October 2019, ten people went to file a complaint with the authorities, claiming they represent hundreds of people who were scammed by the Samsung Korean Language Training Center. They said that the victims had all paid between US$1000-3000 to enrol at the language center which promised to find them jobs in South Korea. The so-called training center is located in Kbal Domrei 2 village, Kakab 2 commune, Por Sen Chey district, Phnom Penh. 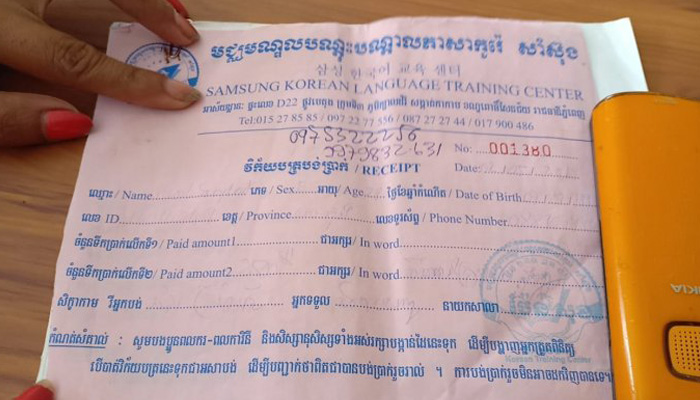 When no jobs materialized, and nobody left for Korea, the people asked for their money back, and they were told by a representative of the company that they must wait until 10 October. This morning, on 10 October, there was no money and the victims realized that they had been cheated, so they went to the police. The police are at present trying to contact the manager of the training center, who has gone missing. Journalists today were unable to contact him by telephone.
Cambodia Expats Online: Bringing you breaking news from Cambodia before you read it anywhere else!

I guess they mean this one - which is nearby to me.. Kbal Domrei - Kakap 2

My God it's tempting!!!
Top

Another Korean language school, the Buncheon Korean Language Training School in Kampong Chhnang, is being accused of defrauding students. These fraudulent "language schools" are also operating as illegal job recruitment centers, promising jobs overseas. Many of the students go into debt to pay for the school fees in the hope of getting a well-paid job in South Korea. Unfortunately, unscrupulous people running these operations, often take the money from the students, and then close the school. The local authorities are accused of turning a blind eye to irregularites.

Cambodian Youth Party (CYP) president Pich Sros is to further investigate the case of a Korean language school in Kampong Chhnang province suspected of cheating more than 300 people with promises of working abroad.

Sros said that he will submit a report to the Minister of Labour and Vocational Training Ith Sam Heng to review the case after concluding his investigation.

At least 40 out of the 300 people who claimed to have been defrauded thumb-printed a request for intervention from Sros, who is a member of the Supreme Consultation Forum.

They said they had been cheated out of between $2,000 to $3,000 for enrolment at the Buncheon Korean Language Training School in Kampong Chhnang town.

A petition submitted to Sros in October claimed that the director of the school, Sorng Sokkong, and three others took the money promising a refund if they did not get to work in South Korea.

However, when no one managed to get work in Korea, the operators of the school failed to return the money.

The petition, which was obtained by The Post, said despite intervention being sought from relevant authorities, they had been unable to get their money back.

Sros told The Post on Thursday that after investigating the complaint, he suspected that the case might involve local authorities, especially the Kampong Chhnang provincial Department of Labour and Vocational Training that allowed the school to operate.
https://www.phnompenhpost.com/national/ ... ng-chhnang
Cambodia Expats Online: Bringing you breaking news from Cambodia before you read it anywhere else!

The director of a closed Korean-language training center denied the fraud and trafficking charges against him in court on Thursday, saying his school only taught dozens of workers who paid him $80,000 in total, and he had not acted as a migrant labor recruiter — but he was willing to return their money.

They were arrested in December 2019 and November 2020, respectively, and each face up to 20 years in prison.

At the Phnom Penh Municipal Court on Thursday morning, Ratha denied both the allegations against him and knowing Sok.

Ratha said he recruited students for Korean-language training, charging $200 per session or $5,000 for a package that included the language training, a blood test necessary for travel abroad, and room and board until they passed a Labor Ministry test allowing them to work overseas.

Ratha said his school had a license to offer language training but no permission to send trainees to work overseas.

“I have no right to send them out. I just teach,” he said.

Ratha managed the Anh Sang school from 2016 till its closure in 2018 following a complaint against him. According to the plaintiffs’ lawyer, Ham Sunrith, 25 people had made formal complaints against Ratha.

“If you only teach job skills, no one would be filing a complaint against you,” Presiding Judge Ouk Reth Kunthea told Ratha. “They said [your] school promised to send them overseas, but the result turned out to be disappointing, and it is not like what they expected.”

After a hearing earlier this month, some alleged fraud victims said rather than going to South Korea to work in a salon as originally promised, they were sent to Dubai to work in a massage parlor. One said outside the court, “I was asked to sell my body. … They said if we did the extra business, we could earn more money.”
https://vodenglish.news/accused-trainin ... urn-money/
Cambodia Expats Online: Bringing you breaking news from Cambodia before you read it anywhere else!