Breaking news from Cambodia can be found here. CEO often finds Khmer news and translates it into English for our readers if it is interesting to expats, locals, Cambodians living abroad and anyone who wants to stay informed of the latest local and international news stories about Cambodia and our neighbors in South East Asia. There are many sources for Khmer news articles and they can all be found here in one place. Most of the media comes out of Phnom Penh, Siem Reap or Sihanoukville, but we cover national Cambodian news from all provinces.
Post Reply Previous topicNext topic
146 posts

There's one policeman clearly visible in green and what looks like another obscured behind.
Top

JUDGEDREDD wrote: ↑
Fri Nov 02, 2018 3:27 pm
The only way someone will be able to find them is with the originals so perhaps not a great idea lol

she is the only one that has it so im less concerned, it will carry her phone digital signature which could be compared with the other gazillion things she posted.
Top 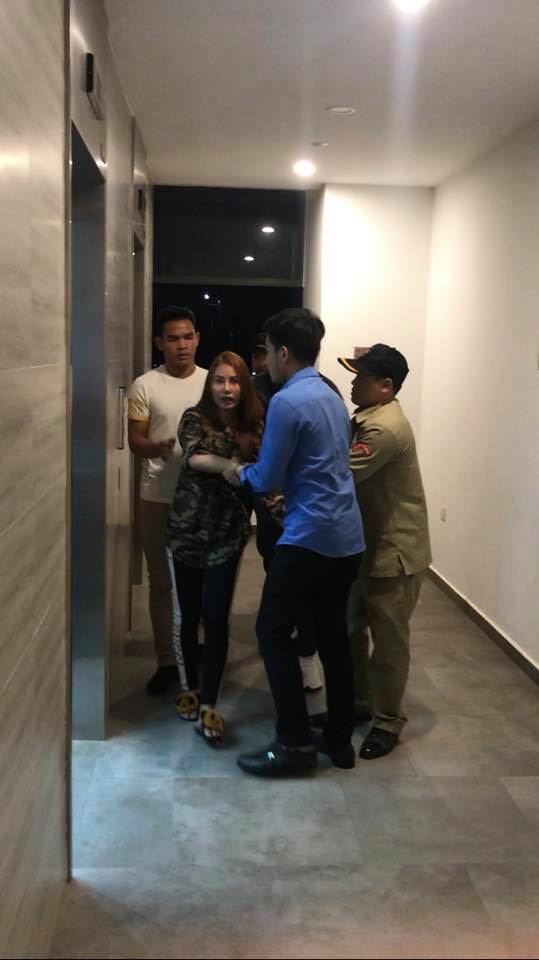 Re the first pic...I wonder what the context is for holding Miss Lumi back?

Re the second video, seems a vengeful thing to post on FB

first pic- shes being removed from my house by the police. happen 4 times between march and may.
the video is from a post i posted in reaction to her posting that im bothering her, So i showed who bothers who. she called maybe 100 times that day, and then was rude enough to say i was looking for her. hmm. lunatic? yes. delusional? very much.

lumi said all she could come up with to every media outlet that was willing to listen, including me abusing her 5 months. how come if we only dated 21 days? again backed with evidence. she posted in facebook our first date, as well the day i asked to go on. all the information is out there.

Doesn't look like police to me.. your house has lifts?

It's funny...why are you both reading each other's posts on FB? If your relationship has deteriorated as bad as you say, wouldn't you unfriend her from FB and put a block on her number on your phone?

there are 3 police officers from BKK3 station, and staff member of the building who escorted them up.

she is stalking, im collecting data for the day that just arrived. ive blocked her countless times, she kept popping from other places. she is obsessed.
Top

Re the first pic...I wonder what the context is for holding Miss Lumi back?

Re the second video, seems a vengeful thing to post on FB

and tbh to say this is vengeful is a joke, you dont believe what sort of evidence i have against her. im holding it back and only the court was exposed to the full extent of it, therefore the quick resolution.
does anyone here believe i would have walked from such allegations paying merely 2000$? they would make me rot in jail and take out 6 figures from me g-d forbid. and whatever i agreed to pay was because i understood the power hierarchy. no point to negotiate unless i feel like spending another night there. im not rich at all but can apply thinking. small money for ending the saga and allowing me to re group. money comes and goes bro. its the damage that is harder to fix.

edit- regarding the evidence, they are dangerous to many people who tried to help her,- not only for her. you can only scam in the dark right? you cant scam and make a festival out of it- and thats what lumi did. she had 3 lawyers deserting the case, you knew that?

Vengeful to the extent you posted it on FB where Miss Lumi and the world would see it. If you got that evidence..save it for the court I say. What did you hope to get by posting that on FB..other than seeming to prove that you are self righteous.

If, as you say she could not provide evidence that you posted naked pics/videos of her, then yuh, $2000 is a lot of $$$ in my book. But yuh, this is KOW and saves you another nite in goal.
Top

Tommy, Tommy what the heck are you doing. Responding here to everyone and posting stuff on facebook about that bipolar girl.
Here in cambodia there are no queensbury rules - people get killed for similar stuff every week.
This girl is desperate now and desperate girls are unpredictable.
If I were you I would either be on my way to thailand or I would try to get on terms with this girl, that allows her to save face.
No matter what I would keep a low profile.
But I guess that train left the station long time ago.
Top

Jeezus Tom, what are you doing? I met you once about 5 years ago ( we had lunch with the woman that owned Aramona, who's name I won't mention, but she told me you were ok and I respected her opinion of you - back then. Now I'm not so sure)
Leave it be mate. You don't owe anyone on this forum answers. Just because people ask a question then DEMAND an answer doesn't mean you have to give them one. Either ignore them or do what I do and tell them to go and get royally fucked.
Seriously mate - SHUT THA FUK UP. You aren't helping your cause at all.
Move on mate and if you can't, at least stop talking to people you don't know on social media whose only agenda is to fuk you over
Top

we had lunch with the woman that owned Aramona, who's name I won't mention

Is there a pattern here?
-
Per ardua, ad stercus
Top

we had lunch with the woman that owned Aramona, who's name I won't mention

Is there a pattern here?

[Mod edit: Really, flaming is not needed here. Thanks.]
Top

$2000 is a shitload of money in Cambodia. You could break a motodop's leg and pay less than that. You made claims, she made claims, you lost in court and were made to pay thousands because her claims had more merit. That's what it sounds like to me. Now you're trying to litigate the case on CEO after losing in court, which is not a good strategy.
Top

I wasn't flaming mod. I was showing tom the use of option 2 ie: when to tell someone that makes a spurious (that means a fake or bullshit, which could also be called "trolling" btw. Why didn't you pick up on that one?) comment to go and get royally fucked.
Now the lesson with Macgavin is option 1 = just ignore his shit outright.
OK?
Top
Post Reply Previous topicNext topic
146 posts