Cambodia News (Siem Reap): On October 27, 2019, at 08:30 am, the governor Mr. Nem Sovann, led the police force in a crack down on illegal fishing in Sas village, Kampong Plok commune, and Meanchey commune, Siem Reap.

The police confiscated 25 fishing nets measuring a total of 750 meters, and burnt them. They also released 10 kgs of undersized baby fish. Police say that illegal fishing is depleting the natural resources. 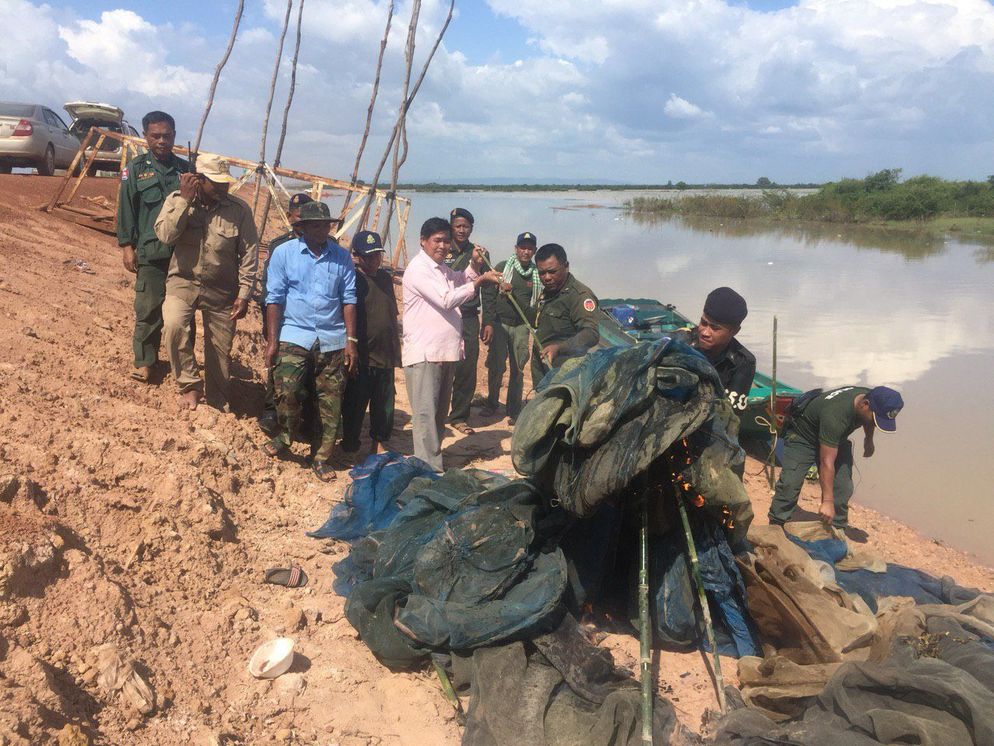 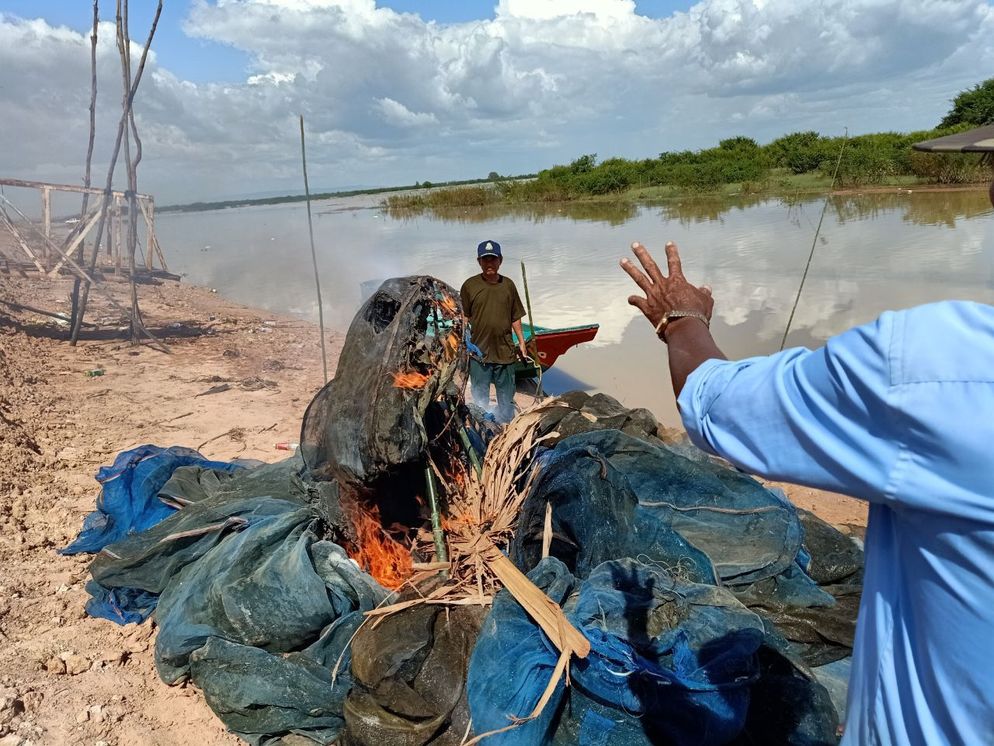 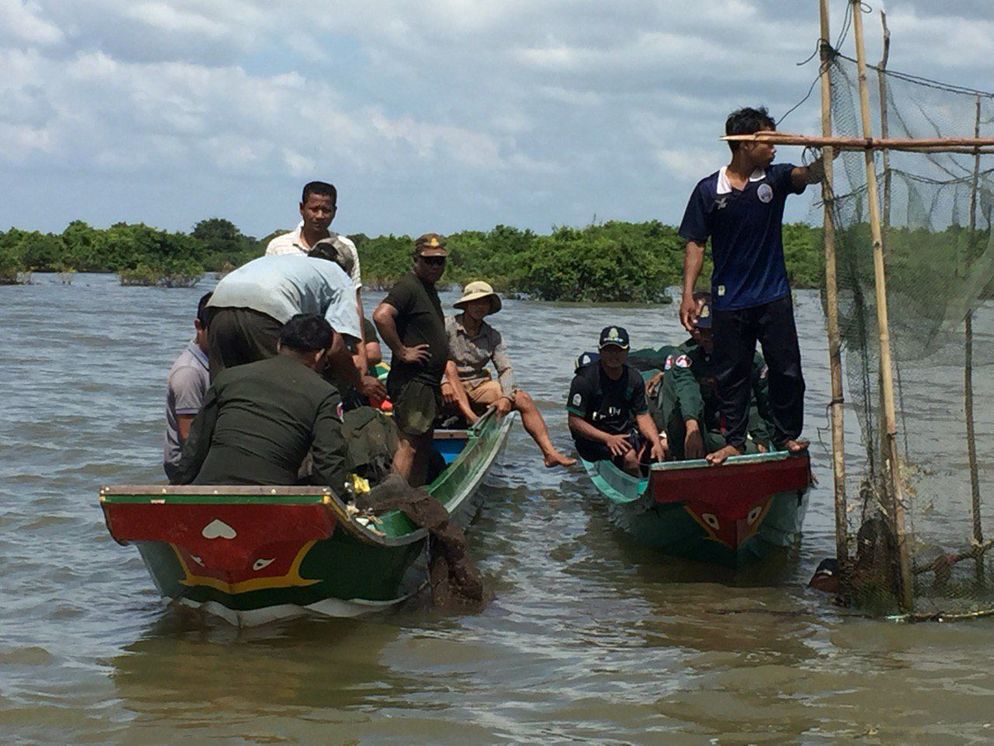 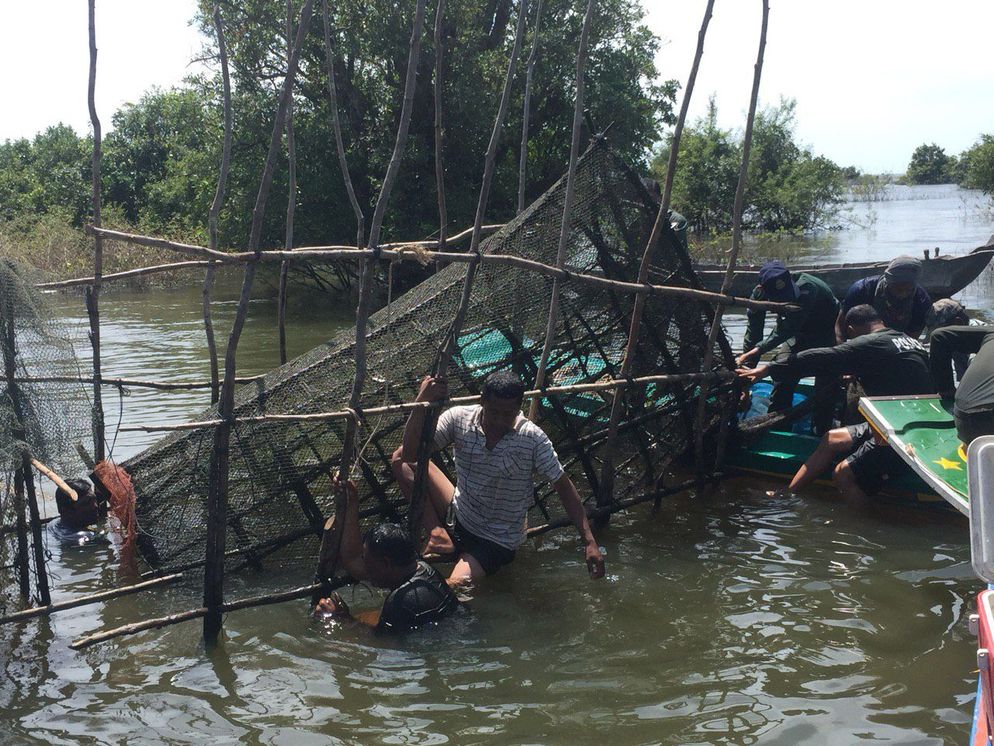 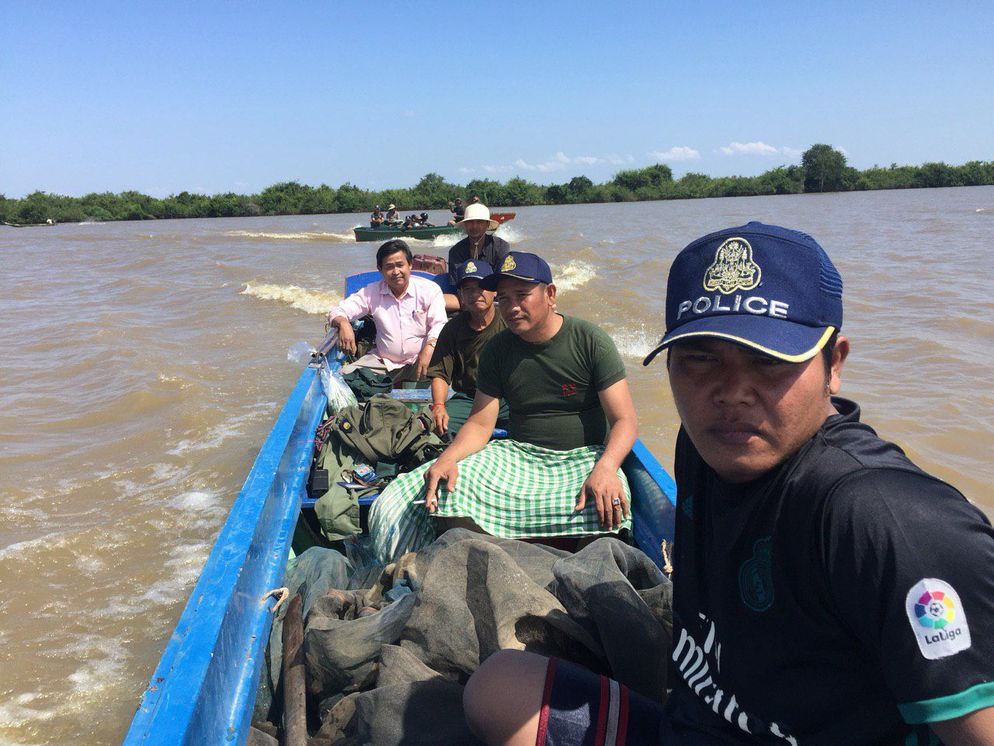 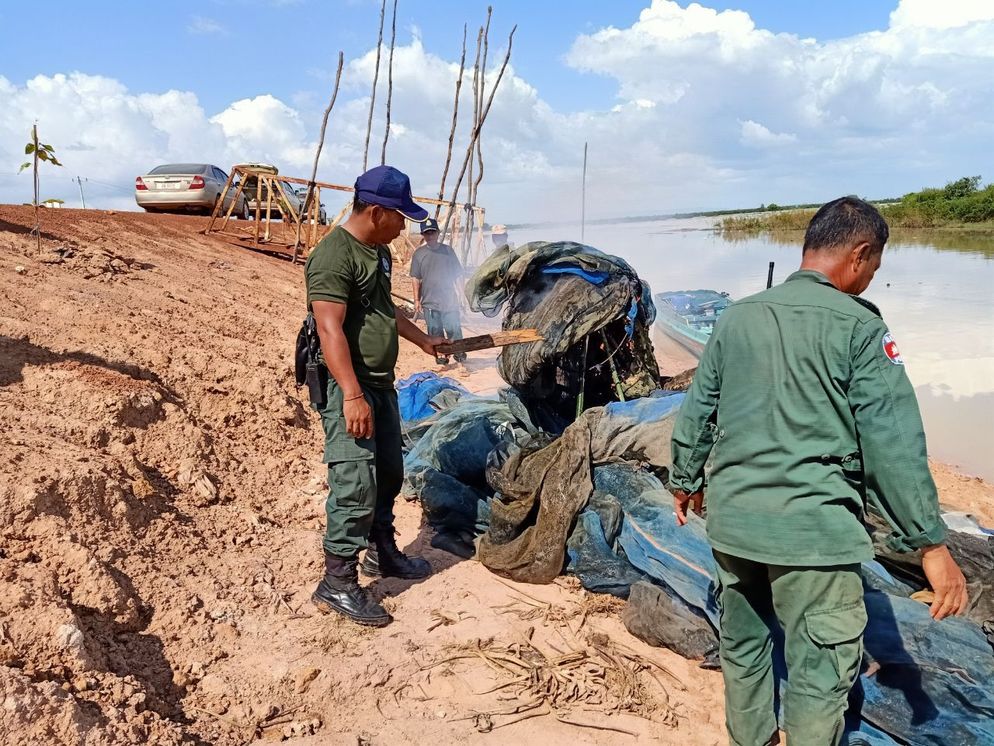 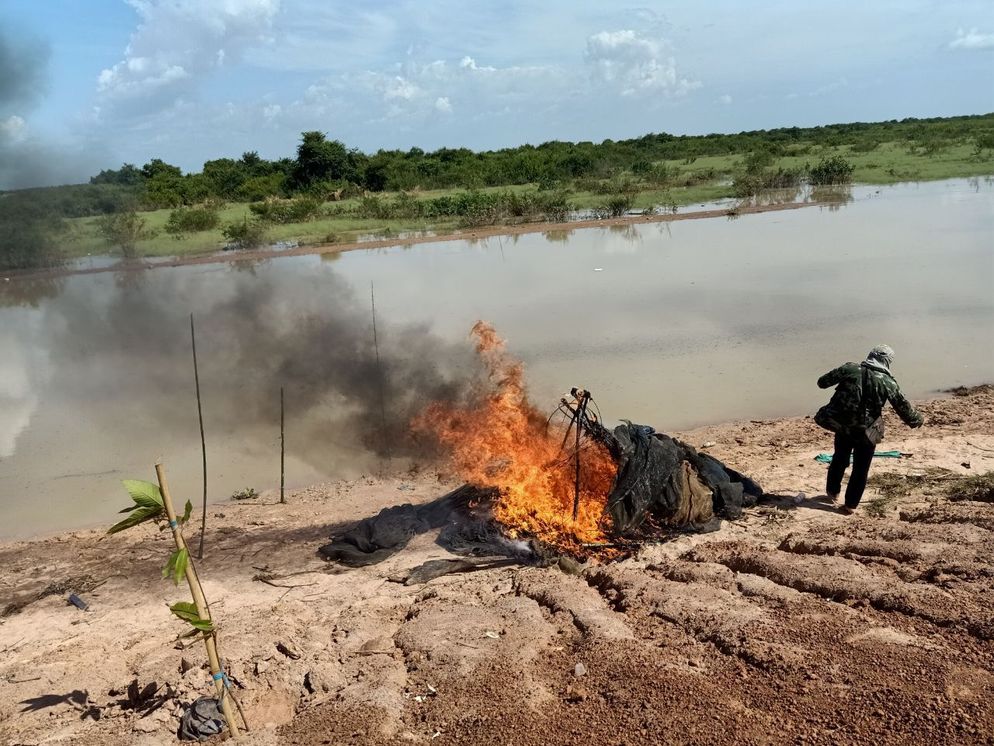 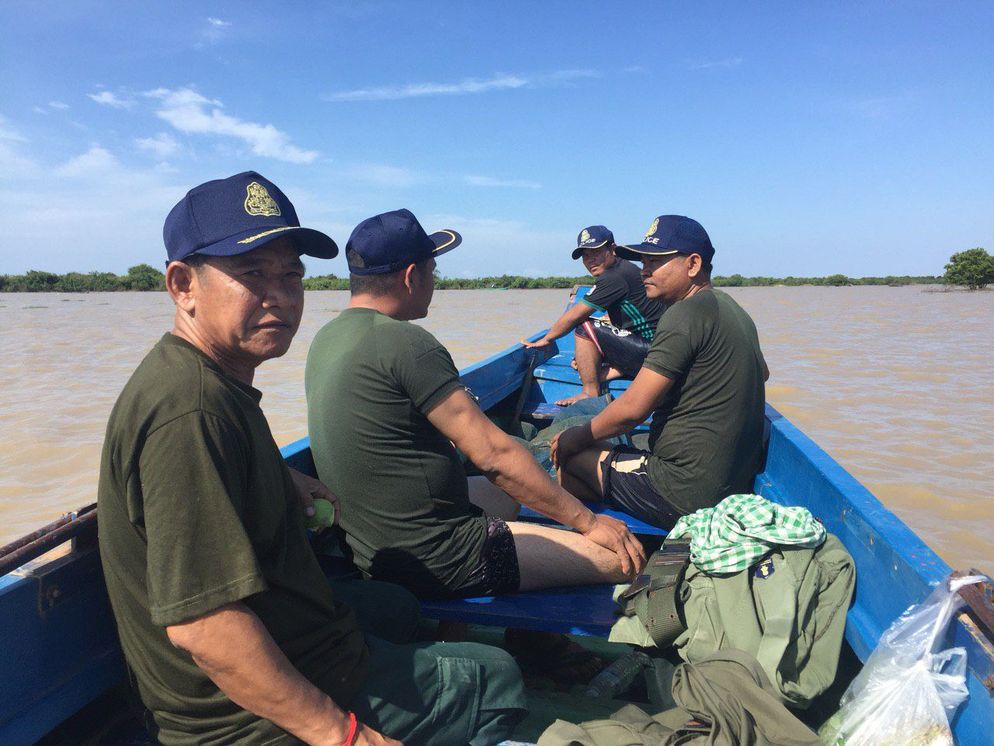 Warning! fishing story..
The Tonle Sap is actually managed reasonably well.
The regulations change quite regularly in response to the trends. Often very hard decisions are taken by the government to the detriment of vested interests.
Corruption however is rife in Fisheries. One of the very worst departments in that regard.

Just an example.
A few years ago i was camped for a couple of months on a floating house just next to a major fish sanctuary - nearly slap bang in the middle of the lake.
Strictly No Fishing Never Ever!! signs up in flashing lights. Everybody knows that.
Patrolled by Fisheries rangers with a flash boat who were also my floating nearby neighbours.

I noticed every sunset boats would start heading into the sanctuary. (see photograhs below)
So i paddled around the entire sanctuary one long half-moon night.
97 boats was my count, from memory. Including the flash fisheries boat running around making sure only "sanctioned" boats were there, and that the "fees" had been paid.

I reported the data by phone first thing next morning.
The Pursat director of Fisheries compliance was at the other end of a three way telephone conversation/screaming argument at one stage - he swore blind he was actually on the lake at the time, and he didn't see anything.
The first part was true anyway. (chuckle)
And my neighbours, the rangers, looked daggers at me in my kayak for the next 6 weeks as i went about my real work.

Heading into the sanctuary at sunset

Fisheries bloke who wants to murder me, (my nearby neighbour glaring at me for two months)

I have been with Khmer friends several times fishing at the canal systems outside of Siem Reap both using fixed traps and nets and nothing was wasted as even the smallest fish were used in some way.
Now consider there were usually several set traps in just the small sections we were at along with a lot of locals using nets I asked what would they do if there were no fish. The answer was along the line of there are always fish that's why we keep all that we catch. Indeed I watched one group catch fish no bigger than 1-2 cm and put the straight onto a charcoal bbq to eat straight away.
Wonder what it would be like if more fish reached Tonple Sap and were allowed to grow?
Top
Post Reply Previous topicNext topic
3 posts • Page 1 of 1