Marty wrote: ↑Mon Jan 20, 2020 2:20 pm This is just fascinating. From the title was expecting to see some kinda quad copterish BS that millenial faggots seem to love. But this is some serious military bit of kit.

I cant find much info on which militaries posses this particular export model, apart from Serbia.

One of the earlier models in the Chinese arsenal, before they started copying the predator MQ9

It IS a serious violation.

Only my opinion, but the map shows clearly the launch radius.

If it WAS Chinese here this begs the question of why they didn't recover it, before the Khmer got to it.

It could be they didn't have time, or it wasn't them.

Is it possible the Thai's got hold of one of these things, under the counter so to speak, and used it to have a peek at what the Chinese are up to? If they lose it they have plausible deniability. Or have I been watching too much TV?
Top

Maybe I missed it, but was this one armed in any way?
It'd be interesting to see an under the hood shot of the front compartment where the electronics package is.
It would seem a fundamental error but I wonder if these things store any data they acquire.
it’s a bittersweet symphony this life
Top

Some more details here from a Phnom Penh Post article a few days ago :

Probe underway after wreckage of drone with Chinese characters found

The wreckage has been taken to the capital for further examination, he said, in comments made three days after a commune resident spotted the drone with Chinese characters on a lawn near his house on Thursday evening.

Sokha said after receiving the report, the Command’s ad hoc committee went to the location to retrieve the wreckage.

However, the committee could not conclude the investigation as the parts were still to be examined in the capital.

“On Saturday, our experts further disassembled the drone and took the parts to Phnom Penh. It is still at Phnom Penh International Airport. We don’t know where the drone came from.

“A technician estimated the drone flew between six and eight hours and a Chinese character was seen on it. The technician said the drone can fly long ranges,” he said.

Sokha said the drone was coated in silver and had the markings “No 1701002”. It was five metres-long with a nine-metre wingspan but was not equipped with weapons or ammunition. 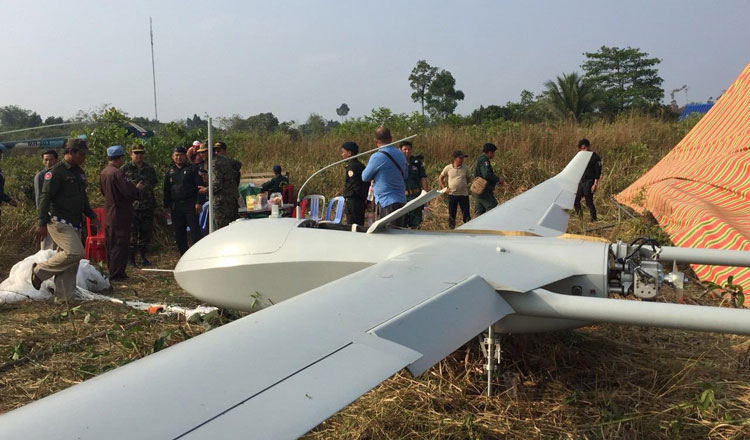 The drone, which has a maximum range of 2,400 kilometers and up to 40 hours flight time is also operated by the Chinese army as a medium altitude long endurance (MALE) and is roughly comparable to the U.S. Global Hawk.

An immediate neighbor is also said to possess similar drones and is even manufacturing some variants.

Thailand’s military government has also deployed drones to the insurgency-stricken Deep South for reconnaissance flights to alert army patrols and other security personnel to imminent rebel attacks and roadside bombings.

BZK-005 is the best aerodynamic design in China, as it has the best lift-to-drag ratio of the drones of its kind and is believed to have been sold to at least 10 countries for military surveillance purposes.

According to unverified research by the U.S.- China Economic and Security Review Commission, the BZK-005 “probably has electro-optical, infrared, synthetic aperture, and signals intelligence sensors and is equipped with satellite communications systems, allowing for real-time data transmission capability.” To date, there is no sign the BZK-005 has been modified to carry weapons.

Due to its size and launch system, the BZK-005 requires a proper runway to take off and land.This characteristic means that the model cannot be deployed from mobile platforms, such as warships or from the backs of trucks.
https://www.khmertimeskh.com/50683232/m ... shed-drone
Cambodia Expats Online: Bringing you breaking news from Cambodia before you read it anywhere else!

The owner of a Chinese-made military drone found in Koh Kong province earlier this month about 7 km from a controversial Chinese development project has yet to be identified by authorities, a Cambodian Air Force spokesman said on Tuesday.

“So far there is no one who has claimed ownership of this drone but we know that it is the product of China,” spokesman Prak Sokha told VOD.

“We cannot make any conclusions about from where it was flown,” he said, adding that the drone’s owner also remained unidentified. “We don’t know clearly so just wait for the committee to investigate.”

Sokha said a Defense Ministry committee had been tasked to inspect the unmanned aerial vehicle, or UAV, but he did not know when the inspection would happen.

The official had earlier told VOD that the drone was a Chinese-manufactured Cai Hong-92A (CH-92A), a mid-size reconnaissance drone that is capable of being armed, although drone experts who reviewed photographs of the UAV said it showed no signs of carrying weapons.

It was discovered by locals in Kiri Sakor district and reported to authorities on the evening of January 16.

Drone researchers have said there were no public records of the CH-92A model being sold in the region and Cambodia is not known to have its own drones.

The UAV was found some 7 km from a land concession held by Chinese company Union Development Group (UDG), which is developing a $3.8-billion resort that has been the focus of controversy in recent years.
https://vodenglish.news/official-says-o ... l-unknown/
Cambodia Expats Online: Bringing you breaking news from Cambodia before you read it anywhere else!

Cambodian Defense Minister reveals that the downed drone found near Koh Kong was privately owned and "just for fun", and definitely not connected to the Chinese military.

He said this after a ceremony during which the ministry donated 300,000 face masks and protective suits to the Chinese Embassy for distribution in China.

Gen Banh told Khmer Times the drone that crashed in Koh Sdach commune was not a spy drone which threatened the Kingdom’s security as some have claimed.

However, he did not provide details about the company which owned it.

“It flew in Cambodia so it is in Cambodia,” Gen Banh said. “They [private company] also have the ability to buy it [a drone] because they just wanted to try it out.”

“From what I see, the drone did not damage Cambodian security. It is not a big issue and they only flew it for fun,” he added.

The armed forces website had identified type of the unmanned aerial vehicle, or drone, as being a Harbin BZK-005, with an ID number 1701002 and it was believed to have been operated by a neighbouring country for aerial surveillance when it went out of control and crashed.

The BZK-005, if confirmed, is a high altitude, long-range UAV used primarily as a long range reconnaissance aircraft designed by Beijing University of Aeronautics & Astronautics and Harbin Aircraft Industry.

BZK-005 has a few stealth features integrated into its design. It is believed that a satellite data link antenna is held in its upper body dome.

Under the body there are optic-electric sensor systems. It is believed that the BZK-005 has a cruising speed of around 170 km/h, a service ceiling of 8,000 metres, a maximum take-off weight of around 1,200 kilogrammes and can carry a payload of over 150 kilogrammes.

It is believed that since 2018, the UAV has been made available in the export market.

However, Major General Prak Sokha, a spokesman for the Royal Cambodian Air Force, said yesterday the Ministry of Defence had contacted Beijing University of Aeronautics & Astronautics and Harbin Aircraft Industry for confirmation over the sale of the ‘BZK-005’ in the market.

“We [Ministry of Defence] contacted the company but the company told it has yet to sell the drone in any foreign country,” he said.

“I cannot confirm which company owned the drone but I am sure it belongs to a private company,” Maj Gen Sokha said. “We [Royal Cambodian Air Force] have already asked the companies located in Koh Kong province but all have denied owning it.”

He added the air force knows the drone belonged to a company which is now refusing to admit owning it.

Yea,,, i / we/everyone, agrees with with that.
Cambodia,,,, Don't fall in love with her.
Like the spoilt child she is, she will not be happy till she destroys herself from within and breaks your heart.
Top

...^^^ on pain of a stint in Prey Sar, being shot while buying a newspaper, or being excommunicated from the kingdom for life.
Of course we agree.