‘Whistles, warnings, kaboom!’: a day with a landmine clearance team

Aki Ra was a child soldier for Pol Pot, laying mines around Siem Reap. Now he is using his expertise to clear land in rural Cambodia and make it safe again.
By Guardian -
October 23, 2019 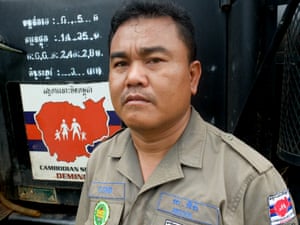 The rusty tailfin of the mortar round can be seen poking through the roots and mud of a small dirt patch, next to a skull and crossbones sign.

Aki Ra thinks the bomb could have been lying in rural Siem Reap, Cambodia, for 40 years. If it hadn’t been found, it may have added another death to the approximately 20,000 people killed by explosives laid in the country from the late 1960s to the 1990s.

Ra, founder of Cambodian Self Help Demining (CSHD), and his team have found about 100 explosives in the two months they’ve been sweeping this 23-acre (9.5-hectare) site in Chi Kraeng district. Despite handling the devices every day since 2008, when the CSHD was formed, none of its workers have been injured by them.

Unimpeded by snakes today, Ra’s team dig around the bomb then carry it to a deeper hole. They move back to the safe end of a 100-metre wire attached to the projectile. Whistles, warning shouts – kaboom! Another one down, up to 6m in Cambodia to go.

The Cambodian government wants the country free of landmines and unexploded ordnance by 2025.

But with landmine casualties rising in Cambodia – 62 in the first half of 2019, up from 31 in the same period in 2018 – the goal seems unrealistic, if urgent.
In full: https://www.theguardian.com/global-deve ... m-cambodia
Cambodia Expats Online: Bringing you breaking news from Cambodia before you read it anywhere else!