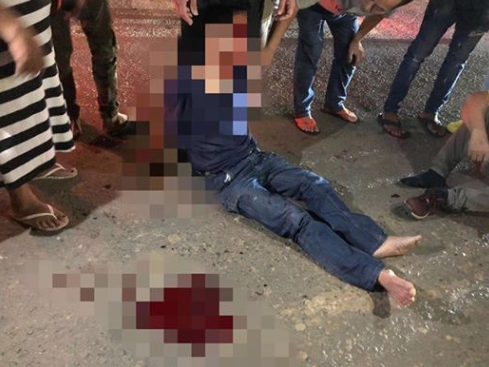 Cambodia Breaking News, Kampong Speu: An accident occurred on a pedestrian crossing in front of Jatakuan Village, National Road 41 between Km 9-10 at 8:30 pm on 8 October, 2019, when a Cambodian motorcyclist ran into three Chinese nationals.

Authorities said the accident was caused by a motorbike driver Khim Saran, a 22-year-old Cambodian man living in Veal Vong village, Kampong Speu. The Cambodian was driving in a north-to-south direction when he hit 3 Chinese nationals, working at Teng Srun factory, while they were crossing the road. One man was badly hurt in the accident and the other two were slightly injured.
The three injured victims were identified as YE HAIUAN, male, seriously injured; QIU GUIHONG, male, slightly injured, and CHEN HANHUA, male, also slightly injured.
Currently, law enforcement is building a case to take legal action.
Cambodia Expats Online: Bringing you breaking news from Cambodia before you read it anywhere else!

It's bad news to hear of any traffic accidents, especially too pedestrian's, even more so on a crossing, being a place were people are thought to be safe crossing a road. I my own country the Uk, pedestrian's have the "right of way" being that they are most vulnerable road users, "yes" there is the highway code for road users, and the schooling of "stop listen and look", even at pedestrian crossings this practice is carried out, but here the pedestrian surely has the right of way. And yes their are accidents with road users not paying attention or following any rules or law. But it seems that here the larger you are (being the motor vehicle) has the upmost rights regardless of any common senses, in effect this will in no doubt lower the overall population.
Also where people too are more then likely in the wrong, look at the area Route National 1 between street 278 and 245, two lane traffic, but mainly Chinese restaurants line the streets. Parking as usual is not the best, and customers will walk 5 a-breast in the near-side-lane, add the on coming vehicle, coming in the wrong direction and it's a disaster just waiting to happen. I can't see this problem sorting it's self out, more so with the Chinese population growing rapidly in the area. It seems there needs to be upgrades in road management and pedestrian safe areas, also education.
Always "hope" but never "expect".
Top
Post Reply Previous topicNext topic
2 posts • Page 1 of 1