Mishmash wrote: ↑Fri Jan 17, 2020 6:23 pm Stripped naked, strung up, whipped with small diameter wire by every guy in the unit.

Sounds like Toul Sleng......glad to hear they're keeping traditions alive....JFC

If indeed the officers involved are guilty the punishment is extremely severe.

One officer I knew (who shall remain nameless), even married to the daughter of a 2 star in a famous unit and serving in that unit himself committed a fairly serious crime (not murder or any physical violence stuff).

Stripped naked, strung up, whipped with small diameter wire by every guy in the unit.

This is not Kansas.

Baby Face is the Judge & Jury

There is no further court of appeal.
Top

Wish I had your confidence.
Top

On January 19, 2020, the Royal Gendarmerie issued a statement to the media and the public:

After receiving information about the irregularities in the execution of the duties and duties of the suspects by the Royal Gendarmerie of the province and the high order of Samdech Akka Moha Sena Padei Techo HE, the President of the Royal Government of Cambodia.

2. Failure to perform the fiduciary duty by detaining suspects with a group of children undergoing drug treatment and allowing them to abuse suspects. After being sent to prison on a provisional detention order by the investigating judge of the Banteay Meanchey Provincial Court, the accused, Tuy Sros, died.

3- As a measure, on January 18, 2020, the police officers of the Royal Commission for the Gendarmerie of the Ministry of Foreign Affairs prepared two officers of the Banteay Meanchey Provincial Gendarmerie to send to the Banteay Meanchey Provincial Court to work. Charged according to law.
As mentioned above, please inform all journalists and the public. 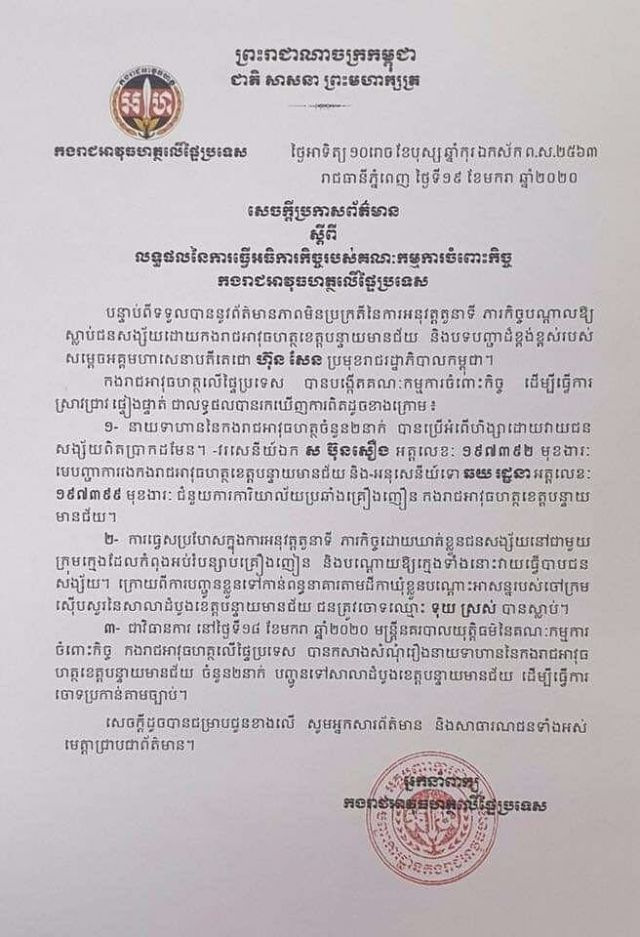 Three of five land dispute victims, representing 150 families in Banteay Meanchey province’s Slakram commune, on Tuesday sued provincial governor Um Reatrey and five others for manslaughter, and the use of intentional violence against them while they were detained for protesting outside the provincial hall last year.

The complaint was filed after Prime Minister HE on Tuesday ordered the Royal Cambodian Armed Forces deputy commander-in-chief Sao Sokha to open an investigation into the alleged death from torture of one of the five detained in a land dispute from December 28-31.

Tuy Sros, a representative for land disputants in Chrey Village in O’Chrov district’s Changha commune, died on January 1 on the way to a hospital after authorities detained him at the provincial prison.

The plaintiffs were identified as Nouv Noeun, An Saron, and Ham Kiri.

The complaint stated that from December 26-27, Reatrey led Military Police forces to bulldoze the villagers’ shelters.

This led to a two-day protest of 150 families and the five representatives in front of the provincial hall.

“We agreed to protest in front of the provincial hall so the governor would address [the land dispute]. Instead, he ordered the provincial Military Police to arrest the five of us, saying we were the ringleaders of the land grab at the Tapen 2 Forest Restoration and Broadcast Station in O’Chrov and Svay Chek districts.

“They violently and severely tortured Tuy Sros until he died,” the complaint said.
https://www.phnompenhpost.com/national/ ... er-torture
Cambodia Expats Online: Bringing you breaking news from Cambodia before you read it anywhere else! 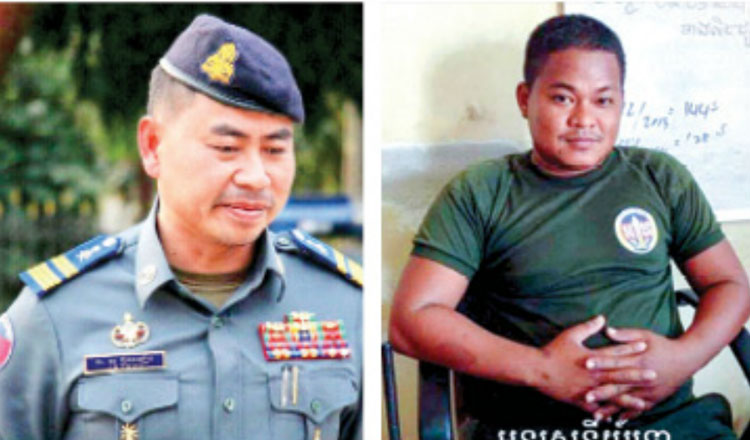 National Military Police yesterday said that two Banteay Meanchey provincial military police officers have been found to be involved in torturing a villager under custody over a land protest.

It said that Bunsoeung and Rathana confessed that they neglected to protect five villagers involved in a land dispute in O’Chrov district to be beaten up by drug addicts.

On December 28, Tuy Sros, 34, and about 40 villagers from Changha commune in O’Chrov district gathered in front of Provincial Hall to protest against the alleged burning of homes on a disputed plot of land in Slor Kram and Soeng communes.

Mr Sros and four villagers were arrested and detained at the provincial military police headquarters between December 28 and 31, accused of committing violence against a property owner.

On January 1, Mr Sros was pronounced dead and his body was returned to his family for a funeral.

Following an order by Prime Minister HE last week a special committee was set up to examine the case.

“National Military commander General Sao Sokha has advised them not to shun from taking responsibility if they committed mistakes. They must be prosecuted if found guilty of wrongdoing,” Brig Gen Hy said.

His wife, Kim Lak, told RFA that a group of military officers came to her house on April 18 to convince her to drop the court case in exchange for compensation, but said she refused.

“They came and wanted to settle the case,” she said. “I don’t know much about them, but they said they wanted to compromise and asked how much they would have to pay.”

Kim Lak said she is afraid that she will be no longer be able to earn enough money to take care of herself and her 14-year-old daughter.

“It’s very hard now—I don’t have money to pay back our debts,” she said. “I haven’t been able to find a job since I lost my husband.”

Another villager who was detained with Tuy Sros and survived the torture named Nouv Noeun said he had filed a complaint to request compensation but has yet to be summoned by the court to give testimony.

“It has been a few months already and the case went cold,” he said.

Nouv Noeun said he was also approached by a group of people on April 18 who asked him to name a price to resolve his case outside of the courts, but he refused.

“It was too late,” he said, adding that he would have considered doing so when he needed treatment for his injuries, but by mid-April had “already suffered greatly.”
“I want a solution that complies with the law,” he said.

Banteay Meanchey provincial governor Um Reatrey could not be reached for comment about the torture cases at the time of publishing.

Soeung Senkarona, spokesman for Adhoc, told RFA that criminal offenses cannot be resolved outside the court system, although the victims can accept compensation.
https://www.rfa.org/english/news/cambod ... 50845.html
Cambodia Expats Online: Bringing you breaking news from Cambodia before you read it anywhere else!

who is developing the land?

surely they are involved, too?

i didn't see any name, did i miss something?
Top

His wife, Kim Lak, told RFA that a group of military officers came to her house on April 18 to convince her to drop the court case in exchange for compensation, but said she refused.

That's one brave lady. I wonder if it will ever get to court or she'll have to accept being bought off.

If she started a go fund me page with a target of $500, I reckon she would have little difficulty hitting the target.
Top
Post Reply Previous topicNext topic
20 posts