Illegal logging poised to wipe Cambodian wildlife sanctuary off the map
by Chris Humphrey on 2 May 2019
Mongabay Series: Forest Trackers 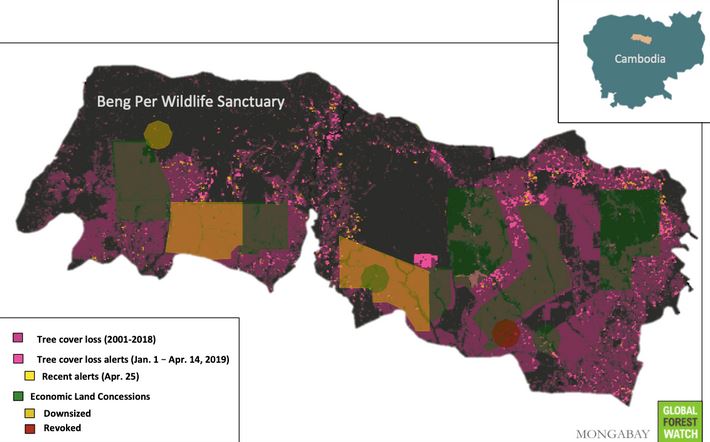 Beng Per Wildlife Sanctuary has lost more than 60 percent of its forest cover since it was established in 1993, with most of the loss occurring since 2010.
A big driver behind the deforestation in Beng Per and in many other Cambodian protected areas was Economic Land Concessions (ELCs), which are areas of land – often in protected areas – allocated by the government to corporations aiming to invest in agriculture for short-term financial gains. Large areas of Beng Per were carved out for ELCs in 2011.
While the Cambodian government stopped officially allocating ELCs in 2012, deforestation is still hitting the park hard as small-scale illegal logging gobbles up remaining forest outside ELC areas. And once the land is denuded, it’s considered fair game for new plantation development.
Experts working on the ground say corruption is fuelling the widespread destruction of Cambodia’s forests, and is deeply entrenched in many different sectors including the federal government and local forest protection agencies.

The tale of Beng Per isn’t just that of one sanctuary, but rather the narrative of an entire nation. Last year, two areas of protected forest, including Snoul Wildlife Sanctuary, were dissolved by royal decree after being almost entirely stripped of forest. Illegal logging is also taking a heavy toll on nearby Prey Lang Wildlife Sanctuary. A look at Global Forest Watch shows large portions of Cambodia covered in the bright pink that denotes extensive tree cover loss, much of it supplanting the dark green that signifies primary forest.

Marcus Hardtke, an expert who’s worked on forest issues in Cambodia since 1996 with a number of NGOs and who has spent the last five years with the international watchdog organization Global Witness, is unflinchingly frank in his description of the wider issue.

“The Ministry of Environment has been rapidly adding new protected areas to the map since 2016,” he said. “By now, basically all the remaining natural forests of the country are under some form of official protection. Unfortunately, illegal logging continues at all levels, from village level to industrial-size operations by the entrenched timber mafia.”

Hardtke said the corruption fueling the destruction of Cambodia’s forests is widespread and deeply entrenched in many different sectors.

“Law enforcement efforts are rather exercises in extortion,” he said. “All levels of government agencies are involved in this: forestry officials and park rangers, police and military units, local and provincial authorities and even groups of local journalists.

“It’s not about forest protection, it’s a rat race for a share of the loot.”
Full article: https://news.mongabay.com/2019/05/illeg ... f-the-map/
Cambodia Expats Online: Bringing you breaking news from Cambodia before you read it anywhere else!

Re: Illegal Logging is Destroying Beng Per Wildlife Sanctuary

Wait, I thought illegal logging had been declared "non-existent" by the government. Weird. Forest cover here is almost non-existent. Probably down to less than ten percent by now.
Ex Bitteeinbit/LexusSchmexus
Top

Re: Illegal Logging is Destroying Beng Per Wildlife Sanctuary

Come and see the new clearing in Pursat.
Very impressive.
Not a tree from Osoam to Pramaoy and Samkos has a logging road to the top from what I hear, all logged.
Although they certainly didn't clear fell, I can see that much.
Apparently the elephants are being pushed further to the south west, behind the mountain, with encroaching logging trails behind them.
But this is all hearsay I suggest we dismiss it all as hearsay. Fake news, if you will.
Sent from my SM-G570Y using Tapatalk
Top
Post Reply Previous topicNext topic
3 posts • Page 1 of 1