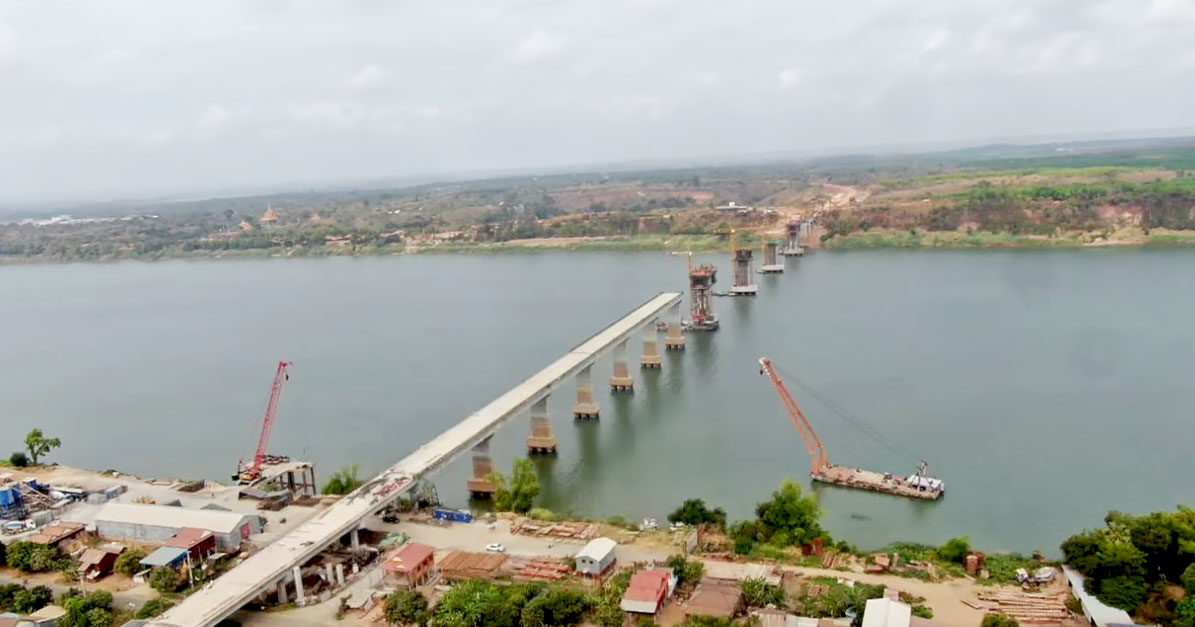 Linking Stung Trang (Kampong Cham) to Krouch Chhmar (Tbong Khmum), the construction of this bridge began on 9 February 2018 and is now 84% complete. The bridge body is expected to be finished by the end of December, while additional works such as asphalt concrete flooring as well as installing signs and poles will be completed by 2021.

Prime Minister Samdech HE said at the groundbreaking ceremony that the project is the third bridge across the Mekong River that was built in Cambodia with the help of China. Each bridge represents the strong friendship between China and Cambodia.

The bridge shows solid ties between Cambodia and China, and also results in huge economic benefits in terms of logistics. This bridge can be a shortcut for exporting and importing goods between Trapeang Tlung, Tbong Khmum province and Tan Bin, Tay Ninh province, Vietnam.
https://www.construction-property.com/c ... -december/
Cambodia Expats Online: Bringing you breaking news from Cambodia before you read it anywhere else!

Special Report: Cambodia-China Friendship Bridge of Stung Trang-Kroch Chmar Offers New Way of Living for Cambodian People (Video inside)
22/05/20 13:08
Tbong Khmum (FN), May 22 – The Mekong River, which runs across six countries including Cambodia, is 4,200 km long and covers a total area of 2.6 million square kilometers. The Mekong River is an important source of water for Cambodians to do farming and fishing for their livings. With countless advantages, the Mekong River also serves as a barrier to Cambodian territory, as it makes it difficult for people living along the river to commute.

Kroch Chmar district in Tbong Khmum province is located along the Mekong River where most people fish and farm. Every day, people usually bring their fish, fruits and vegetables to sell at the market in Stung Trang district, Kampong Cham province by traveling on small boats and then switch to ferry three years ago.

When traveling on small boats to Stung Trang district, people living there said that when they crossed the boat to sell fish, vegetables, and fruits, they encountered many difficulties, including boat sinking in the middle of the river. Sometimes heavy rain stopped them from traveling and forced them to keep their products at home instead. Sometimes they are forced to rent a boat in a high price when the villagers get sick in the middle of the night or the pregnant women give birth.

A resident of Kroch Chmar district, Tbong Khmum province, Chrech Saem described her hometown as an isolated island separated by a large river. The 43-year-old woman, who has a small business at home, added that since her district is far from the Kizuna Bridge, locals often travel across the Mekong River in small boats.

“It is very difficult when we get in a very small boat to cross the river. There have been cases of boat sinking. Sometimes when we are halfway, the sky is raining, and we cannot stop… We continue our rides and big waves make us difficult.”

Besides facing risks, crossing by boat is also costly to bring products to sell at market, which caused people to lose their income. If they can not come back home on time, they have to rent a boat that costs about 60,000 Khmer Riel (USD 15); otherwise, they have to stay overnight, and cross the river in the morning.

Mr. Ror Sato, a Cambodian-Muslim citizen living in Kdul Kandal village, Trea commune, Kroch Chmar district, Tbong Khmum province said, “At first, he served as a boat rower carrying people to cross the river by his rowing boat; then as a fisherman but the boat had no machines. Later, we have larger boat that could carry more motorcycles and people, but not cars. Now, we have ferry to use and it costs 5,000 riels (USD 1.25) to cross the boat and we need to spend more on food, which likely to reduce profits.”

Living along the river with no bridge to cross, people can not do business and can not access to health centers easily. Samthoeurn Thirith, the owner of a clinic near Stung Trang river said, "Most people come here because the market is here; if they want to buy their goods, they have to come here. Another hardship is that when people get very sick, they cannot cross the river immediately, but have to wait for the boat. Sometimes the patients' health got worst because they need at least half an hour to cross the river. Sometimes it is an emergency, and we think we can help. However, due to the delay, the patients' illness got worst," he added.

To reduce the difficulties encountered by the people living along the river located in Kroch Chmar district, Tbong Khmum province as well as the Stung Trang district in Kampong Cham province, and to fit with the slogan “With Road and Bridge, Comes Hope," the Royal Government of Cambodia decided to build a bridge across the Mekong River connecting Kroch Chmar district and Stung Trang district.
The groundbreaking ceremony for the historic bridge was held on 9 February 2018, presided over by Prime Minister of Cambodia HE, and the former Chinese Ambassador to Cambodia Xiong Bo.

The bridge has a total length of 1,131 meters and a width of 1,350 meters, a type of “the Continuous Box Girder Bridge”. In addition to the construction of the bridge, a total of 8,323 meters of road were constructed on both sides of the bridge. By the end of March 2020, the Cambodia-China Friendship Steung Trang-Kroch Chmar had achieved 90 percent efficiency despite the challenges of the Cocid-19 pandemic. The Steung Trang-Kroch Chmar bridge is scheduled to be completed in early 2021.
Full article: http://en.freshnewsasia.com/index.php/e ... 05-09.html
Cambodia Expats Online: Bringing you breaking news from Cambodia before you read it anywhere else!

3 June 2020, AKP
Here are some updated photos of the future bridge linking Stung Trang district with Kroch Chmar district of Kampong Cham province. The construction of the bridge was launched on Feb. 9, 2018, and should be completed in March 2021. 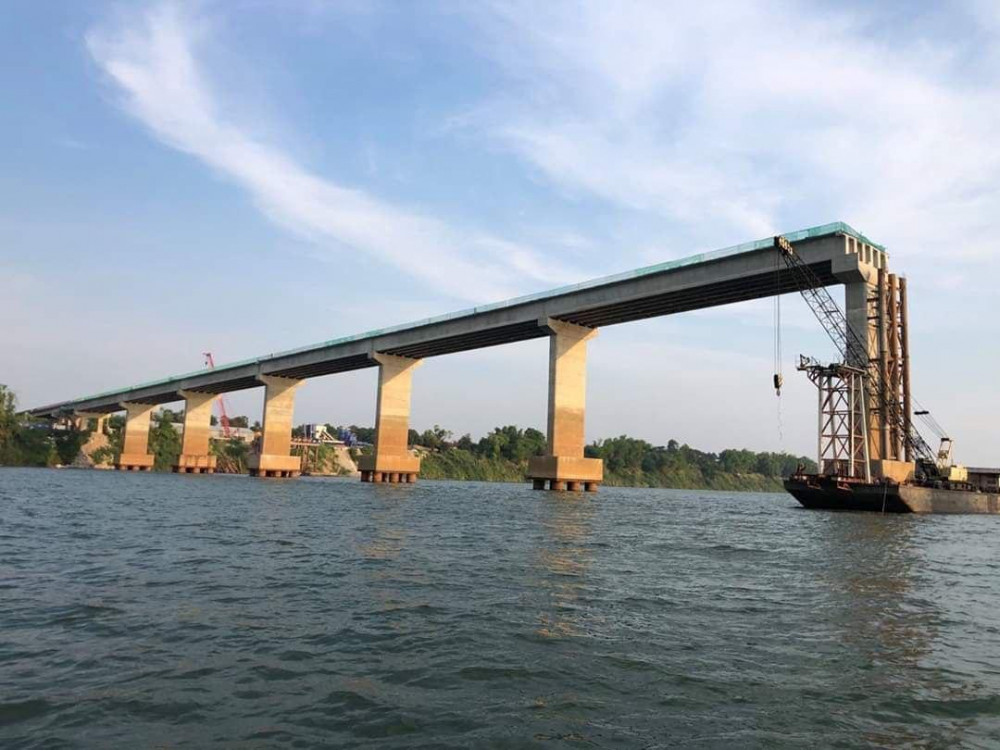 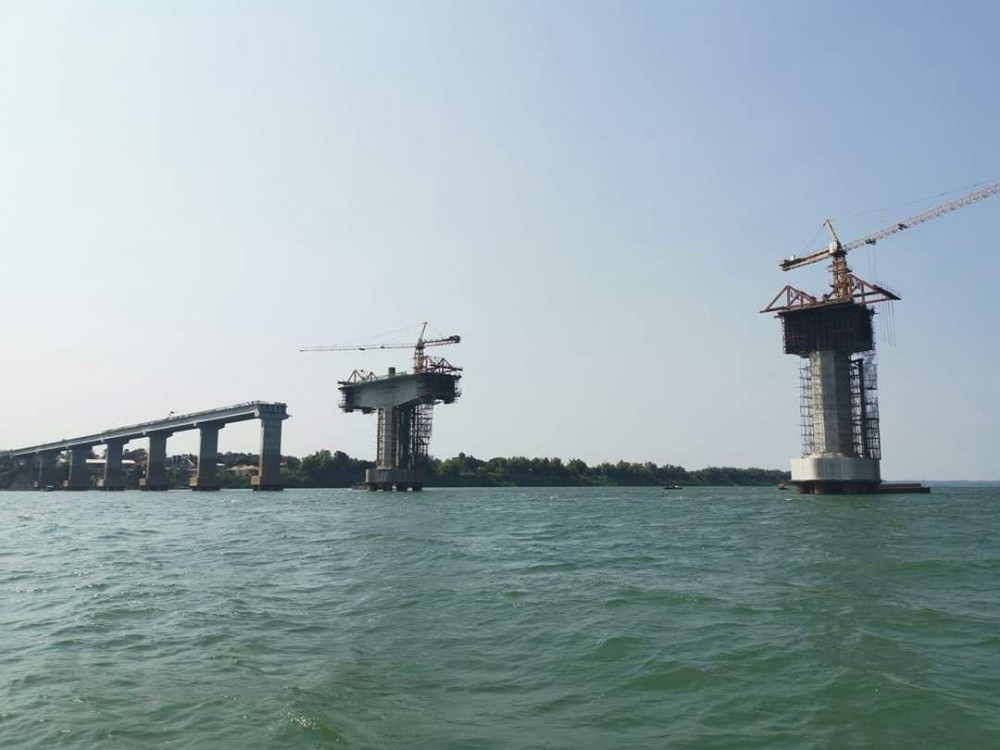 (Photo: Ministry of Public Works)
Cambodia Expats Online: Bringing you breaking news from Cambodia before you read it anywhere else! 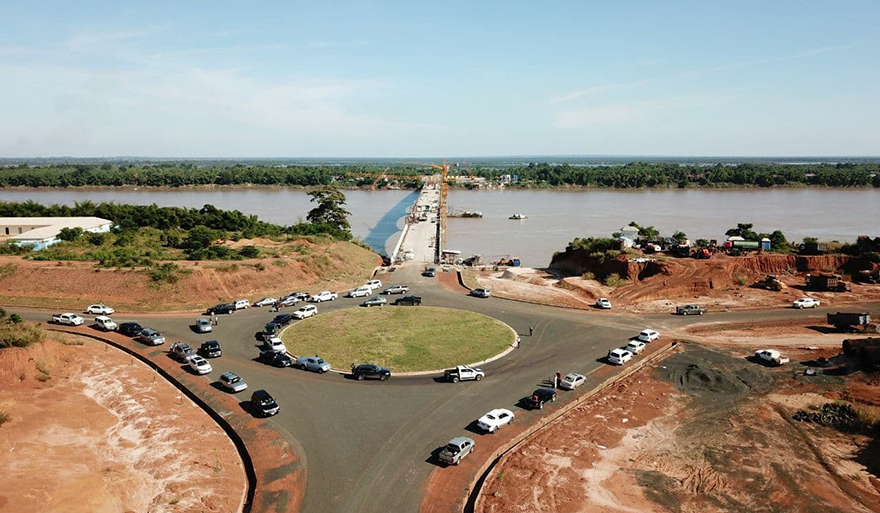 Cambodia News, Kampong Cham Province: People near and far applauded the achievement of the new concrete bridge across the Mekong River, which is the second bridge after Kizuna Bridge. 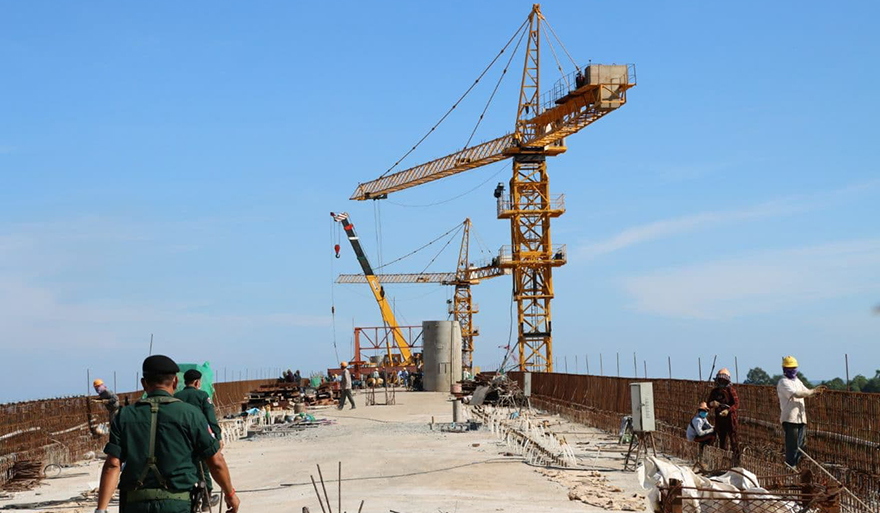 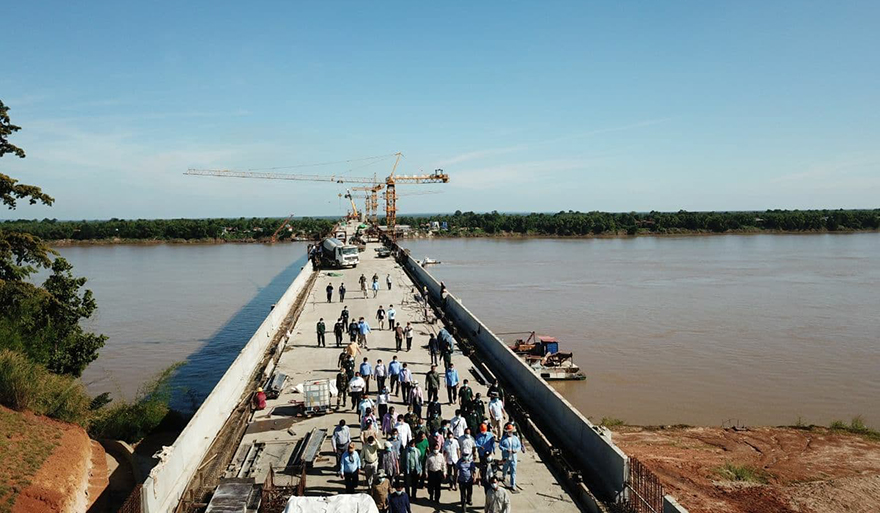 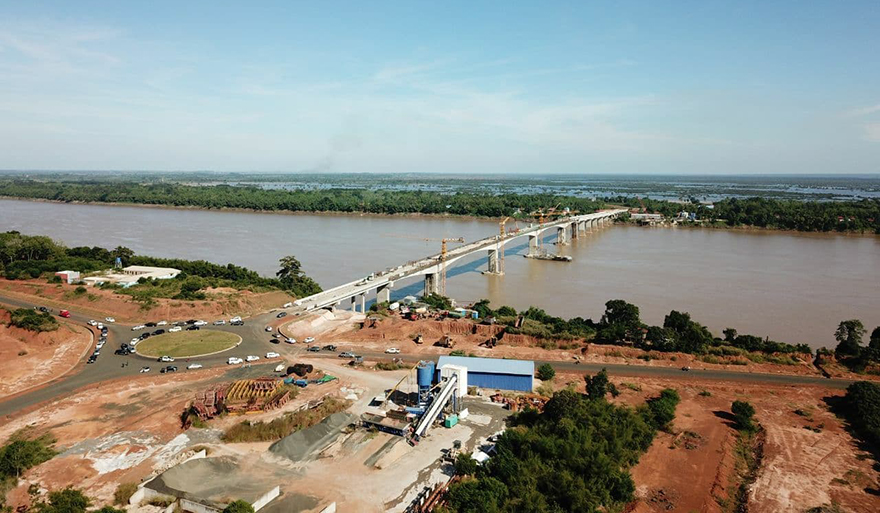 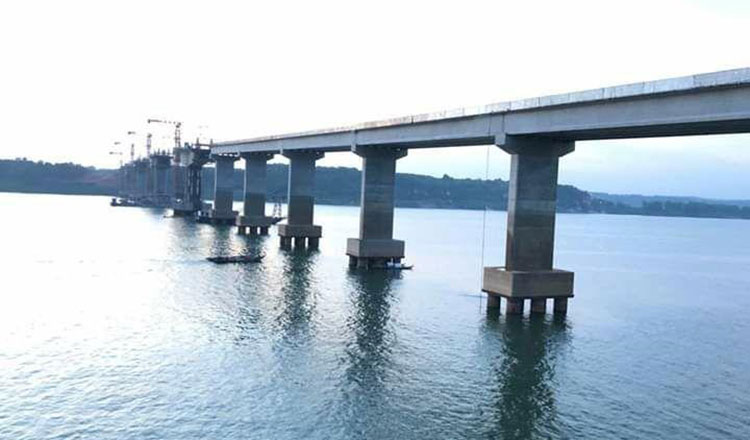 The Steung Trang-Krouch Chhmar Bridge has reached 95 percent completion and has been unaffected by the COVID-19 related delays that have plagued other projects in the Kingdom.

The bridge’s construction has completed all its engineering stages and asphalt is currently being laid on the bridge deck with its guardrails also being installed.

The project will be completed ahead of schedule in March 2021. It was originally due for completion in May 2021, said the Ministry of Public Works.

“The bridge will make a significant contribution to transportation, travel and cargo transport for the people of Kampong Cham and Tbong Khmum provinces,” according to the Ministry.
https://www.khmertimeskh.com/50806328/s ... ompletion/
Cambodia Expats Online: Bringing you breaking news from Cambodia before you read it anywhere else! 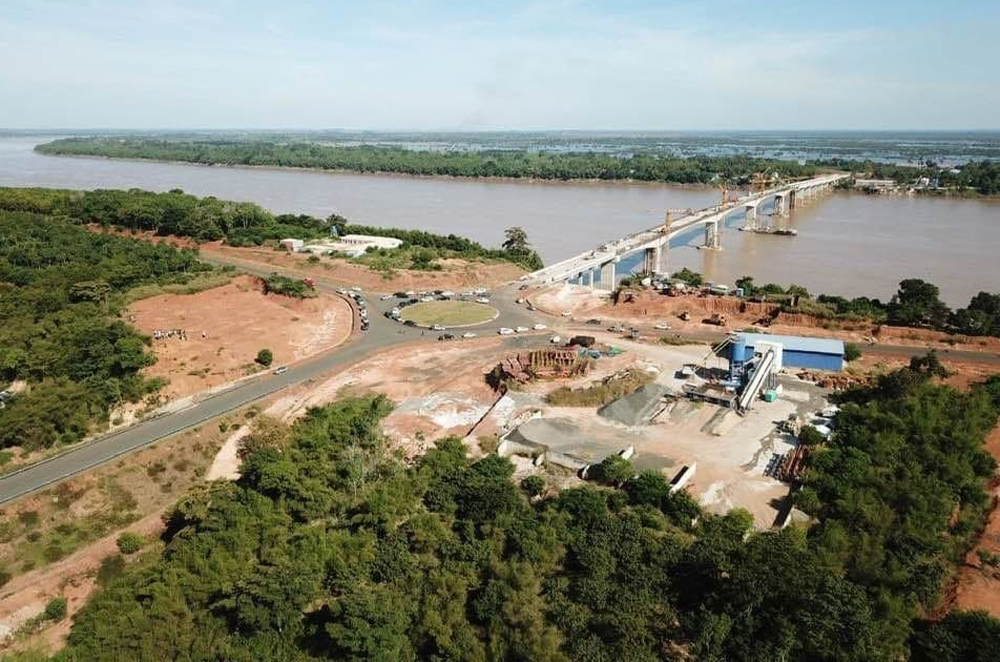 The construction of a historic bridge across the Mekong River, linking Kroch Chmar district with Stung Trang district of Kampong Cham province, will be completed soon as it reached now 96.49 percent.

H.E. Sun Chanthol, Senior Minister, Minister of Public Works and Transport made the update at the ministry’s annual meeting held here on Feb. 16 to review its achievements in 2020 and set forth new goals for 2021.

Once completed, the bridge will contribute significantly to the livelihood and economy of the locals through better transport connectivity.

The area was the origin of Cambodian troops that freed Cambodia from the dark Khmer Rouge period and enabled systems for solid development and growth of the country as seen these days.

With an approximate cost of nearly US$57 million, the bridge will stretch 1,131 metres long with 13.5 metre width.

The construction of the bridge was launched on Feb. 9, 2018 under the presidency of Prime Minister Samdech Akka Moha Sena Padei Techo HE.
- AKP
Cambodia Expats Online: Bringing you breaking news from Cambodia before you read it anywhere else!