Prime Minister denies Chinese investment for Yeak Laom Lake
July 4, 2018
Prime Minister HE yesterday dismissed a media report that said the government will grant a lease to a Chinese firm to manage and develop the Yeak Laom Lake area in Ratanakkiri province.

Mr HE’s reaction came after he read a local newspaper report that said the government will grant a license to a Chinese company to manage the popular tourism destination in Banlung city for 75 years.

“This morning, I read an article in Rasmei Kampuchea Daily that said the government will grant Yeak Laom Lake to Chinese firm for a 75-year investment,” Mr HE said in a Facebook post. “Who creates this issue and for what?”

“As the Prime Minister, I would like to totally reject any investment on this significant natural lake,” he added.

According to an Interior Ministry letter signed in April by a secretary of state Sak Setha, the Ratanakkiri provincial administration asked the ministry to permit investment on Yeak Laom Lake.

The letter said that the investment will be in partnership with Chinese firm Dasheng Fortune Assets Management company.

In the letter, Mr Setha ordered provincial Governor Thorng Savon to hold meetings with relevant departments, local authorities and the Yeak Laom Lake community to study and assess the impact once a license was granted.

He said that he wanted the provincial authority to gather more information on the impact and tackle all issues which could arise from the investment before filing a report back to the ministry.

In another letter, the Chinese firm’s director Li Shuchun requested the license in July 2017, noting that the project would cost $7 million for the construction of a parking lot, gate, ticket office, tourist market and a helicopter pad.

The letter added that the Chinese company will build two roads circling the lake, and will also erect a barbed-wire fence surrounding the lake to prevent land grabbing and deforestation in the area.

Mr Shuchun said in the letter that the project would have no environmental impact.

I’m trying to wrap my head around this circular reasoning from iron man and company. No development but extensive construction and a perimeter fence? Can anyone more knowing explain this official government position?
Top

newkidontheblock wrote: ↑
Thu Jul 05, 2018 4:56 am
I’m trying to wrap my head around this circular reasoning from iron man and company. No development but extensive construction and a perimeter fence? Can anyone more knowing explain this official government position?

Yeak Lom is a sacred site for local ethnic minorities, who have maintained the lake and surrounding forest as a local tourist attraction, keeping it very underdeveloped, with a small entry fee and a few places to hire mats or hammocks, where you can sample local food or bring your own. Fishing, and boats or jetskis, are prohibited. 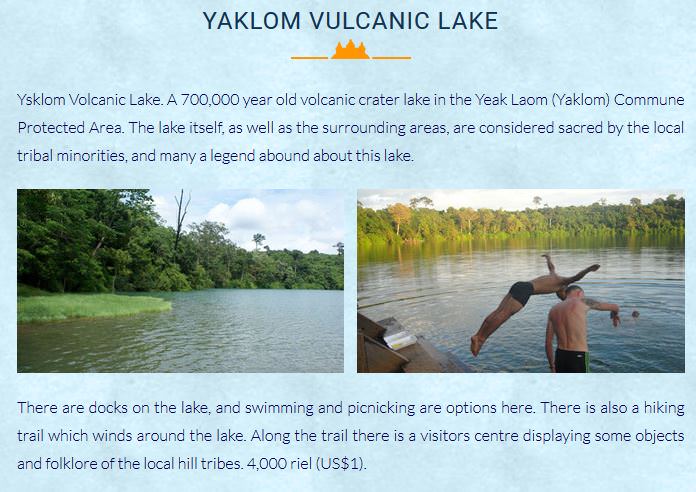 The potential to make a lot of money from this natural volcanic lake has not gone unnoticed by developers. There have been rumors of a Chinese development project for some years now. However, the Cambodian Prime Minister has denied media reports that Yeak Loam will be leased to the Chinese, so there is no need to be concerned for the immediate future of this pristine environment.
Cambodia Expats Online: Bringing you breaking news from Cambodia before you read it anywhere else!

Hard to know if this online rating will have an impact on the future of the Banlung lake. And if so, will being ranked as one of the world's most beautiful crater lakes encourage the preservation of Yeak Loam, or on the contrary, will it hasten the exploitation of the site for international tourists? 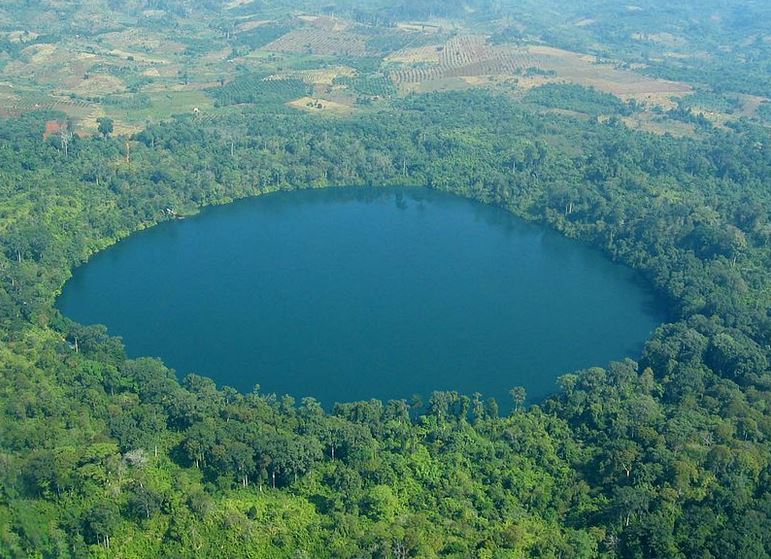 - According to EARTH website recently, Boeung Yeak Lom located in Banlung town, Rattanakiri province, has been ranked 12th out of 15 among the natural volcanic crater lakes in the world.

Nger Vivo, director of the provincial tourism department of Rattanakiri, told Rasmei Kampuchea on December 21,2018, that Yeak Laom Lake has been Ranked # 12 in the World. It is an eco-tourist site of calm clear water surrounded by shady trees, and visitors are charmed by its beauty.
In 2018, Rattanakiri tourism received more than 190,000 national and 50,000 international tourists, up by over 10% compared to 2017.
Cambodia Expats Online: Bringing you breaking news from Cambodia before you read it anywhere else!

It's been announced that another lake and forest area in Ratanakkiri - Lumkod Lake - is to be set up as a protected landscape by the government. This should be good news, but unfortunately, this decision is more likely to signal a land-grab by state government over local authorities for some of Cambodia's last remaining primary forests.

The government has decided to set up a protected area of more than 100 hectares in Ratanakkiri province to protect the environment, biodiversity and sustainable use of natural resources.

It said the aim is to maintain environmental equilibrium, biodiversity conservation, natural resources and natural beauty protection and ensure sustainable use of natural products.

“Another aim is to preserve the culture, tradition, development and the cultural significance of local communities,” the sub-decree added.

However, the sub-decree stated that the Lumkod lake landscape protected area does not include private land and land used in the public’s interest.

Neth Pheaktra, a secretary of state and ministry spokesman, yesterday said that the Lumkod lake area is rich in natural resources, including forests, wildlife, beautiful landscapes and ecosystems.

He said it is currently attracting tourists, which is why the ministry requested it to be designated as a landscape protected area.

“The designation of Lumkod lake as a landscape protected area will help to protect this area from illegal land encroachment, protect its natural resources and provide the benefits of eco-tourism to the community around the area,” he said.

Mr Pheaktra said that following the designation of the lake as a landscape protected area, the ministry will put up poles to clearly demarcate its boundaries and make plans to preserve it, such as deploying rangers to protect natural resources, prevent deforestation and stop illegal wildlife hunting.

Meanwhile, the Agriculture Ministry has revamped the National Permanent Secretariat which is tasked with preventing and cracking down on the cutting, transportation, collecting, stocking and exporting of rosewood, a rare species in Cambodia.

Agriculture Minister Veng Sakhon said in a letter on January 4 that there would be 12 people from relevant ministries and institutions including a chairman, three vice-chairmen, a permanent member, six members and a secretary tasked with running the secretariat.
https://www.khmertimeskh.com/50568015/g ... protected/
Cambodia Expats Online: Bringing you breaking news from Cambodia before you read it anywhere else! 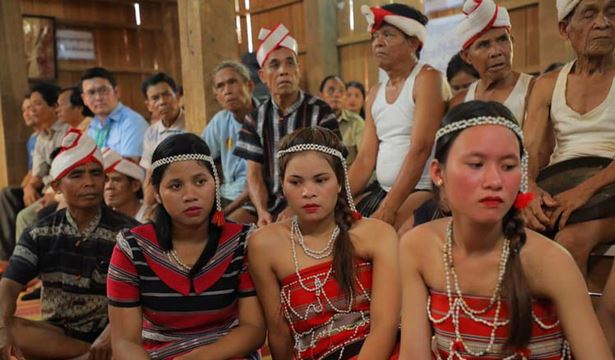 MOE
The Environment Ministry on Friday announced the recognition of an area in Ratanakkiri province’s Banlung city as the Boeng Yeak Laom protected area.

Mr Khemarin said that after the recognition, the community now have access to technical support, clear community management plans and waste management. He added that the community will also be able to cooperate with officials in protecting nature in the area.

“When there is community participation, the management of the Boeng Yeak Laom Protected Area will also be better,” he said. “It can help contribute in curbing deforestation and in attracting tourists to the region.”

Khieu Borin, director-general of the ministry’s local community general department, said on Friday that by establishing the protected area, livelihoods will be improved and the dependence on timber products and wildlife will be reduced.

“The arrangement of the protected community, especially when it comes to eco-tourism communities, is an important mechanism in preserving and protecting natural resources,” Mr Borin said. “It also promotes the livelihood of the community so it can participate in the management and use of natural resources effectively.”

In June last year, Prime Minister HE issued a sub-decree for the establishment of the multi-purpose Yeak Laom Lake Area, which covered 225 hectares to preserve, protect and conserve.

The protected area also covers Yeak Laom Lake, a 4,000-year-old volcanic crater turned into a lake, and its surrounding forests. The lake is a popular tourist destination.

The sub-decree is composed of six articles aimed at conserving wildlife, forestry, ecological systems and biodiversity in the area.

Environment Minister Minister Say Sam Al at the time said the area was in dire need of protection.

“The establishment is to allow the ministry to register the land in the area to become state land to avoid any problems,” Mr Sam Al said. “Before the area was not clear, so we wanted to prepare the area for proper management.”

Ven Churk, a representative of the Boeng Yeak Laom community, could not be reached for comment yesterday.

According to the Environment Ministry, Boeng Yeak Laom was previously known as the Yeak Laom forest community.
It was established in 1998 with the participation of 637 families in five villages.
https://www.khmertimeskh.com/50598819/b ... -ministry/
Cambodia Expats Online: Bringing you breaking news from Cambodia before you read it anywhere else!

Its a pretty cool place to visit, and very clean. But nothing to do at all and in about 15 minutes: boring. There's not much on the food offering there either. The drive there on moto was more thrilling. I liked Banlung. I wonder if any expats have chosen to live there? My lady calls the people midgets. haha.
"Dear Lord Baby Jesus, Lyin in a Manger"
Top
Post Reply Previous topicNext topic
18 posts