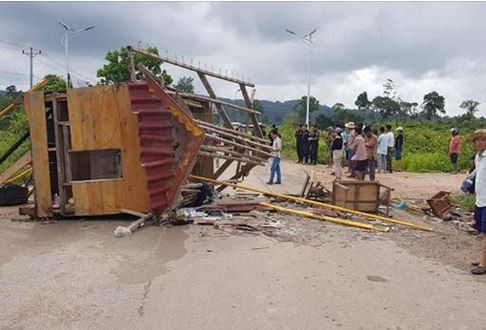 The guardhouse and road barrier installed by a Chinese company was destroyed by angry locals in Prey Nup district, Sihanoukville.
Cambodia Breaking News (Sihanoukville): There are reports on social media (Huy Bunleng) of clashes between local residents protesting against the barricades of Chinese Yingjiang Company on the way to Koh Samet beach in Ream district, Prey Nup district, Sihanoukville.
A source from the local office of Ream district, Prey Nok district said in a statement on condition of anonymity that the cause of the outbreak of protests was anger with the Chinese company Yingjiang, which imposes road barricades restricting the free movement of local residents.
On the afternoon of July 17, 2019, there were initial reports that a Chinese man was wounded as well as some local people. Four Cambodian men are reported to have been arrested, but this had not yet been confirmed by the authorities at 5pm today.
Cambodia Expats Online: Bringing you breaking news from Cambodia before you read it anywhere else!

The incident began at about 2pm on Thursday in Ream commune’s Ream village after local people took exception to the checkpoint that they say prohibited them from taking construction materials into their village.

“The four suspects were sent to the provincial court for their involvement in injuring an employee and the destruction of a Chinese company’s property. The arrests followed a fight between thecompany’s staff and local people."

“The company did not close the road. It only installed a security checkpoint on it,” district Governor Sar Kakada said.

Preah Sihanouk Provincial Hall spokesman Kheang Phearum told The Post on Thursday that a large group of villagers protested to the company and then removed the security checkpoint, which was built at the entrance leading to Koh Sampoch beach, and attacked and injured a Chinese employee.

“After the fight broke out, local police and other authorities intervened and stopped the violent attack. The local authority worked with Prey Nop district police to find a peaceful solution,” he said.

Leab Van, a resident who witnessed the attack, said at around 2pm on Thursday, nearly 100 people gathered near the security checkpoint to demand that the company explain why it had blocked the road.

He said the villagers claimed the company had prevented them from taking their construction materials into the beach area where their village is located.

A heated argument began which involved the villagers, local authorities and the company’s representatives, Van said.

“After everyone had talked back and forth, the people started to grab wooden sticks and smash up the security post in an attempt to remove it. They destroyed the checkpoint."

“Then the police called the Military Police for back up and together they stopped the protest. After that, four people were arrested,” he said.

Van said the company had installed the checkpoint after it was granted a licence for the Meas Prak Beach Resort development project – known as Gold and Silver Beaches – on over 3,300ha of land in Ream National Park.
https://www.phnompenhpost.com/national/ ... inese-firm
Cambodia Expats Online: Bringing you breaking news from Cambodia before you read it anywhere else!