In search of Ben Edict

Discussions about restaurants, cafes, coffee shops or bars in Cambodia. Feel free to write any reviews you have, whether its the best burger you've had in Phnom Penh or the worse pizza in sihanoukville, we want to read it! Discussions about Khmer dishes are also in here, or you can leave your own. If you own a restaurant, feel free to let the expat community know about it here so that we can come check it out. Found a favorite cafe or have a place we should avoid? Tell us about it. Asian recipes & questions are always welcome.
Post Reply Previous topicNext topic
51 posts

In search of Ben Edict

So I've been trying out a lot of places lately in search of the best tasting (and best value) eggs Benedict in town. I rarely eat out for breakfast unless a friend invites me because I generally find it's one of the easiest meals to prepare at home and the markup on eggs and other breakfast basics is huge. I'd forgotten about them up until a few months ago when I had a major craving for that lemony sauce. Eggs benedict are a rare breakfast which my mom used to make now and then in my childhood. They also actually require ingredients which one doesn't typically have handy here, while more time and skill are needed to prepare them than say, frying eggs and sausage.


Cavern
Cost: 5.5$ for the parma eggs benedict (more for certain versions such as salmon)

I tried these the first week they became available. Pardon the picture, as many of you know, Cavern is dark (and hot) inside. The picture doesn't do them justice. Definitely the worst â€œeating experienceâ€ of the bunch in terms of comfort (but I still go there regularly). One major problem is that their English muffins aren't what I'd call (or anyone else I'd think) english muffins. They were large, but didn't have the big holes which english muffns typically have, nor did they have the same consistency. They just tasted like a heavy bread. Not sure if it was a yeast problem, or maybe they didn't use enough lard to make them, but they're not english muffins... Maybe it was a one-off (first time making them), or maybe English people have a different â€œversionâ€ of English muffins... Either way, they didn't look or taste like I thought they ought to. On the plus side, they were quite large and very heavy, so they fill you up nicely. So I guess it's not all bad. The sauce was good, but not lemony enough for my taste. The highlight of Cavern's eggs benedict is probably their ham. Very thinly sliced (so you don't get much), but it somehow tasted superior to other places. Crowd of rowdy Englishmen among others. Good value at 5.5$.

Believe I or not, this was the first time I'd ever been to Metro (and I'm probably the only expat that's never set foot in the FCC). Settings are nice, but I really don't understand why they've managed to expand so much. I have been to the sushi/cocktail place twice before though (never my choice though). Very pricey list of food and full of Gavinmac-ish types trying to hit on the average-looking waitresses. I don't particularly like the riverside (tons of tourists, annoying motodops, kids selling books and legless beggars), but Metro has a nice setting inside and the aircon is set perfectly (not freezing, but not too warm).

They definitely came out nicely. Eggs were cooked to perfection and the sauce was probably the best tasting of all so far. I like a lemony sauce, and this one was both rich, creamy and tangy at once. Spot on! The english muffins were also great. Exactly what I'd call english muffins. It also came with two asparagus and a few garlic roasted potatoes which were unneeded, but helped make the meal a bit heavier and filling. Top-notch. Pricey compared to other options, so not sure how often I'll come back, but taste-wise they were great. Mixed crowd of tourists, expats and 70 year olds with their very young girlfriends. Oh, and Gavinmac/Scobienz types (almost forgot to mention to mention K440 users!).

Brown in another place I usually never set foot in. I think I've had one or two teas from them. I'm not a big coffee drinker... I was never a coffee drinker (and thus, coffee shop patron) in the west, so I'm certainly not about to start buying 4.5$ frocca-moccas here. But it is nice to have a place to sit quietly and work on the computer (being alone at home sucks a bit during the day). I found the aircon a bit lacking though (I was at the Sothearos one, upstairs). Probably because the roof wasn't insulated.

In terms of value, I have to say Brown's eggs benedict are great. 3.5$ gets you a single (but oversized) egg benedict. The ham they use is the cheap square stuff from any supermarket (Thai German or whatever it's called). I was a bit disappointed when I saw that, but presentation is good and the sauce is very decent. Service is definitely spotty though. But then again, it's a coffee shop...
It's admittedly not a full meal, but if you're parkish, it's a nice snack. I'll definitely be back if I want a cheap snack. Great value. Crowd of slightly annoying khmer teenagers/hipster equivalents. Seems coffee shops like Brown attract the same crowds no matter where you are in the world.

I didn't have the ham eggs benedict at Duck, opting instead for the salmon one. They come on toasted rye bread. The sauce was very good (probably a close second to Metro imo, maybe on par). Lemony, rich and creamy. Price-wise it's good. Settings are obviously very nice. Aircon isn't super cold like at Metro, but they have ceiling fans going and it's very comfortable and it's the most nicely decorated place imo. The only downside of that meal was that it's not really a meal... Portions are simply too small unless you're a 10 year old underweight girl. Upon leaving, my friend and I both had a bubble tea (with tapioca balls) next door to fill ourselves up. Still, I think Duck's brunch specials are worth a visit. I've been busy and have yet to be back despite my original visit being around a month ago, but it's definitely on my list. Crowd is obviously of the Tonle Basaac NGO/CD variety. Family friendly.


Homemade
Cost:Roughly 1$-1.25$
I've made eggs benedict before, but I don't have a bain marie and was looking for an easy recipe. Tried these:
http://allrecipes.com/recipe/english-muffins/" onclick="window.open(this.href);return false;
http://allrecipes.com/recipe/blender-hollandaise-sauce/" onclick="window.open(this.href);return false;

The actual English muffins aren't bad, but they taste a bit like the Cavern buns. They don't taste the way I figure they should. They're not bad, just taste different. The blender hollandaise is actually great considering the amount of time and effort needed. I also used lime juice intead of lemon juice. Still tasted good. I'll definitely be making some more of these! I have around 14 buns frozen in the freezer so it'll be easy to cook some. I still haven't mastered poached eggs (as you can see)...

Let me know of any other places that make eggs benedict. I've decided to try out a lot of places.
Ex Bitteeinbit/LexusSchmexus
Top

Try out Chat and Chew on 172. Haven't had the benedict but i've had their poached eggs and they were perfect, velvety goodness.
Top

And have you tried the microwave method yet?

Microwave poached eggs are excellent, except for the ones that explode.
Bodge: This ain't Kansas, and the neighbours ate Toto!
Top

StroppyChops wrote:Microwave poached eggs are eggcellent, except for the ones that explode.

Double fixed that for you.
Cambodia's answer to Bet Lynch

Oh man, totally missed that. Boy do I have egg on my face...
Top

Double fixed that for you.

Yeah, but I don't have a microwave.

I used to have a little "double egg poacher" for microwave. 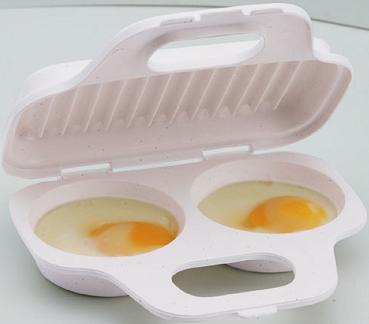 Worked really well, but I don't really need a microwave here (or rather, I've managed without one for years now) so have to try the old-fashioned way. Come to think of it, they probably used the microwave method in the restaurants. Damn...
Ex Bitteeinbit/LexusSchmexus
Top
Post Reply Previous topicNext topic
51 posts