Discussions about restaurants, cafes, coffee shops or bars in Cambodia. Feel free to write any reviews you have, whether its the best burger you've had in Phnom Penh or the worse pizza in sihanoukville, we want to read it! Discussions about Khmer dishes are also in here, or you can leave your own. If you own a restaurant, feel free to let the expat community know about it here so that we can come check it out. Found a favorite cafe or have a place we should avoid? Tell us about it. Asian recipes & questions are always welcome.
Post Reply Previous topicNext topic
39 posts

For reference.. here is a picture of the two beers they serve at 5 Men Brewpub after I've aggressively swirled the beer around in the glasses to try to get some proof of carbonation.. As you can see there is NONE. Not a single Co2 bubble.(No. The "foam" is not a result of Co2 coming out of solution.. it's a result of swirling uncarbonated beer around in a glass. You'd get the same result from tapping uncarbonated beer into a glass from a height. It settles out after a few seconds.) 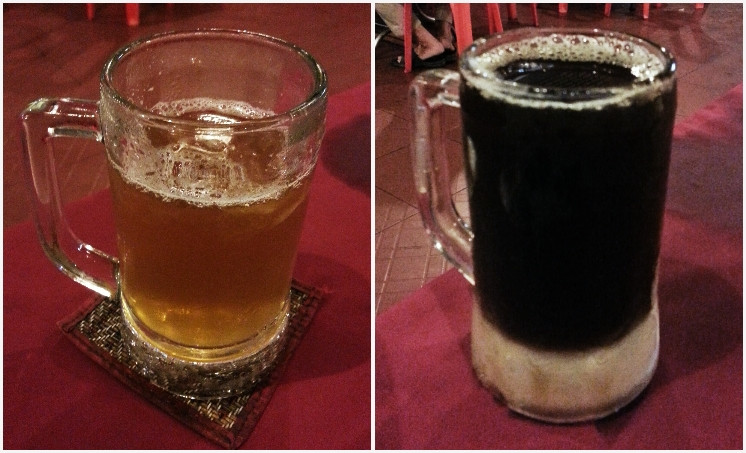 Here's a couple more pics of the establishment itself: 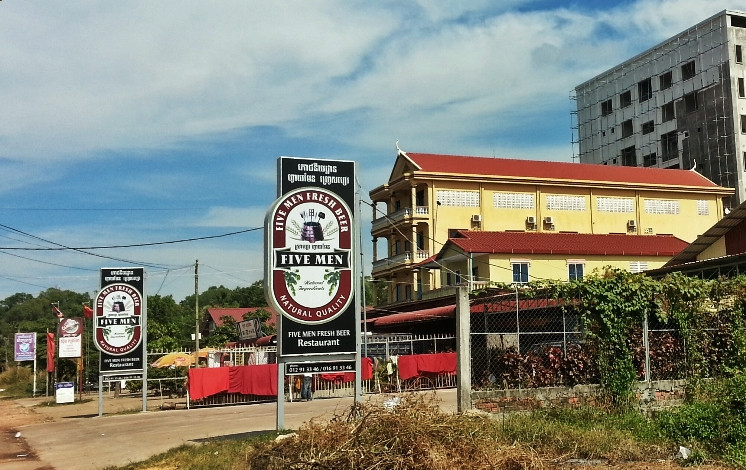 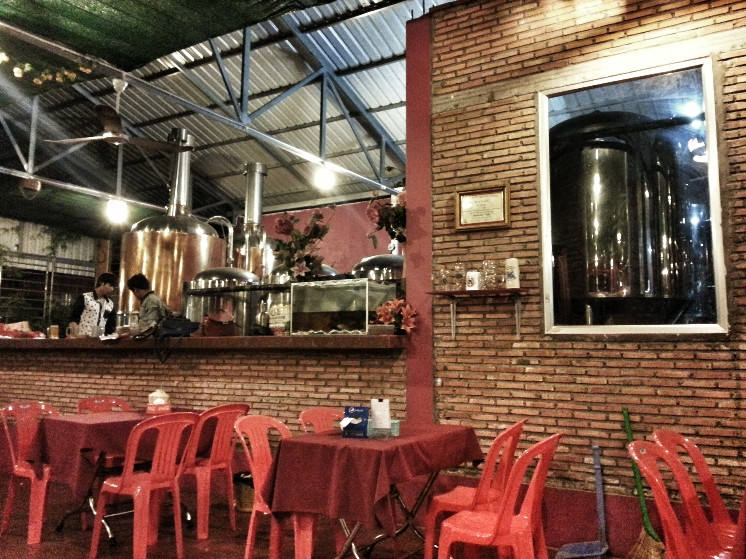 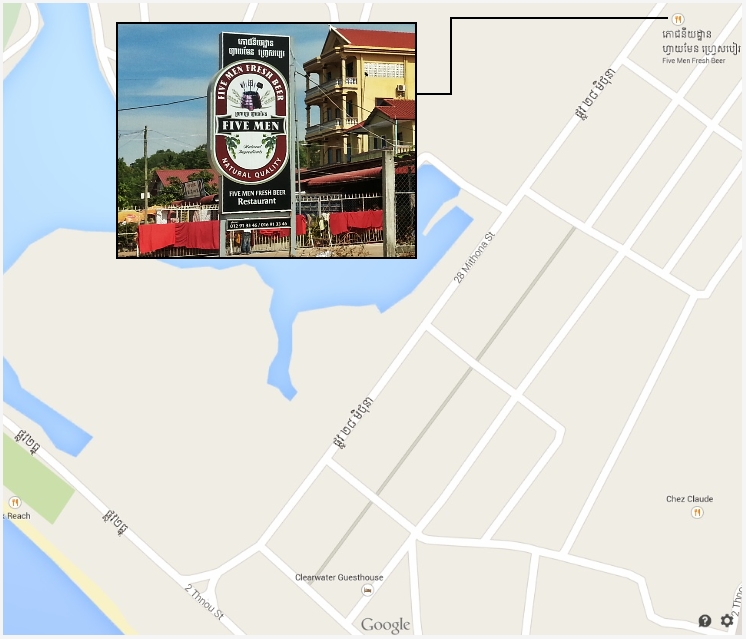 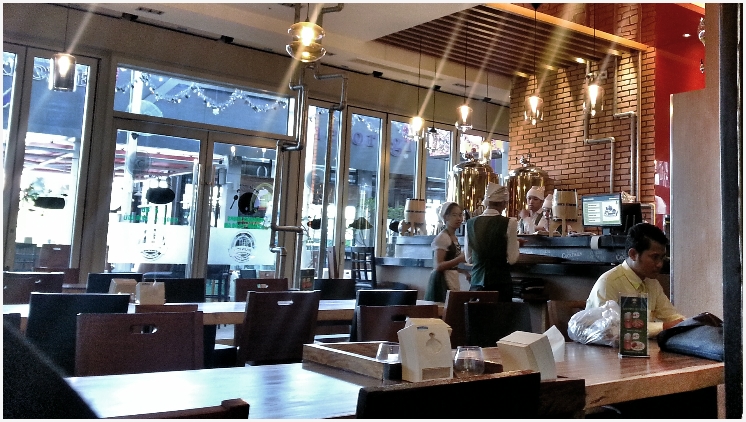 They've got the two same beers that all other brewpubs (that don't do ales) in Asia seem to have. A (fairly cloudy) pilsner and a dark beer. Both taste similiar to the ones at 5 men in Sihanoukville but at least they manage to carbonate and mature their beers.

They are rather expensive though. 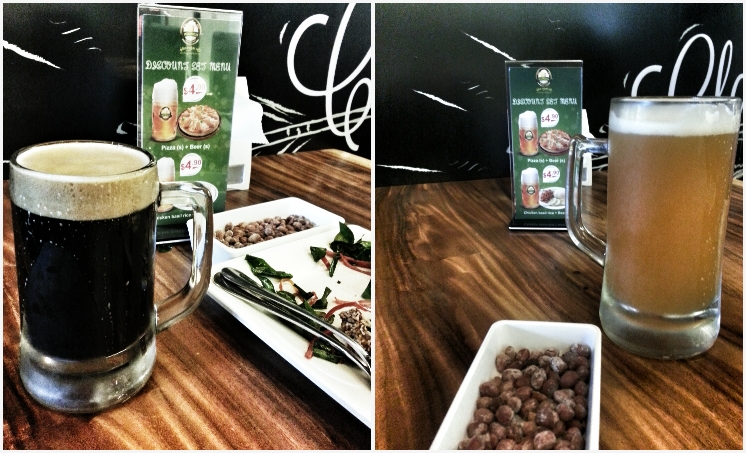 Stopped and had a Black beer at 5 Man today ($.75) and it had a foamy wonderful head and the taste was so nutty flavored. I have noticed one thing at 5 Man, if a barrang comes in they try and fill the mug as full as possible, maybe that's why others they don't know get no head as their thinking maybe a full mug and they will come back.
Top

Been there a couple of times now after taking a swim at Independence Beach and have to say: Great place. Talked a lot about brewing and beer in general with the owners (who did his brewery examn in Berlin, Germany) and he definitively knows what he's doing - at least for Cambodian standard. The "yellow beer" (as they call it) is pretty in my opinion, but I don't like the dark one that much. Probably because I'm not a fan of dark beer in general.

$0,50 for the yellow beer a definitively a reason to visit the place, but actually the traditional Khmer food their is absolutely delicious as well. Would suggest to go for the cow tongue (perfectly cooked, will melt on your tongue) and check out the fresh seafood as well. Can definitively recommend this place.
Top

I go out to independence nearly daily & I have no desire to stop back in. The beer has gotten an F in all 3 visits. If they actually take the time to age their beer in the future, they'll probably see a lot of me.
Top

Letting the beer age is actually a point we talked about as well, as I couldn't understand why it's not done. Seems like they're doing it as well, but started just recently (why the f ever) so there should be some aged one around as well in the near future.

Maybe I've seen you around at Independence lately? I usually park my moto in front of the first cafe/restaurant on the left side, after taking the right turn when coming down from the brewery. Then either the beach bar just in front of the "parking space" or the one left of it. (Can't remember their names, sorry).
Top

I switched gyms from Sokha to Independence Hotel & I live downtown. so I go by there a lot. At the beach, I hang at Small Beach Bar. PM me if you want to have a drink, my gf is in Vietnam for a couple weeks & I'm raring to whoop it up.
Top

Absolutely up for a beer, write you a PM.
Top

frank lee bent wrote:they should get a vietnamese to show them how to make bia hoi- that is a good brew and quick to make.

And so fucking cheap it's almost free.

I live in Hanoi, just left my local beer hoi, and emphatically agree.

Beer hoi, a just-brewed, low-alcohol draft beer that is pretty tasty and about 40 cents U.S. each.

The big down-side for some here is that the local establishments tend to close around 10-1100. There are tons of exceptions and the old quarter is a particluar exception, but it is fair to say that the city mostly starts to wind down before midnigh. Beer Hois usually sell out hours before that, but again, there are exceptions

Not sure how I can explain going to bed after 1 sm for more than a week.