See: https://www.vkmag.com/magazine/khmer_jo ... _talen_wel
There are people who cannot imagine that there are other ways of life than their own life.

I wasn't so impressed.
Top

New life beckons for multilingual Cambodian boy at centre of viral video
(Updated: 17 Nov 2018 12:35PM)
SIEM REAP, Cambodia: In the ancient temple complex of Angkor, it is not often a new attraction emerges. But from the country’s most revered site, a new sensation has arrived - a young boy named Thuch Salik.

Salik, a slight 14-year-old, has become an overnight online star after a Malaysian visitor to the temples posted a video on Facebook of her interaction with him where he speaks in 10 different languages.

The post went viral throughout Cambodia and many parts of Asia, throwing the spotlight on a boy whose place in society would typically see him ignored.
https://www.channelnewsasia.com/news/as ... l-10937500
Cambodia Expats Online: Bringing you breaking news from Cambodia before you read it anywhere else!

Still not impressive because that's just not possible!
Top

Big in Beijing: young multilingual Cambodian internet sensation to star on Chinese TV
Street-smart Thaksin became hit online after viral video showed him chatting to tourists
Talented hawker says he wants to go to university in Beijing
UPDATED : Saturday, 17 November, 2018, 12:20pm
A Cambodian boy who became an internet star worldwide has been invited on a three-day trip to Beijing after being filmed speaking at least 12 languages and dialects, Cambodian media reported.
The boy, named in various reports as either Thaksin or Thuch Salik and whose exact age is unclear, was filmed hawking souvenirs first in fluent Cantonese, then Mandarin, Japanese and Thai by a Malaysian tourist at the Ta Prohm temple in Angkor Wat.

In another video shared on Chinese social media, he and his brother were filmed answering questions in fluent Mandarin. “I can only speak Mandarin, but I don’t know how to write it. I want to go to university in Beijing,” the boy said in the video.

His performance of a popular Chinese song, where he changes a line of the lyrics from “we are here waiting for you” to “we are here selling things to you”, attracted the attention of a Beijing television station, the reports said.

Cambodia’s K01.news reported that the television station – which will pay for the boy and his family to travel to Beijing – would interview him in a live broadcast. The Cambodian Red Cross would pay for the siblings’ education, the news outlet said.

The young hawker speaks at least 12 languages and dialects, which he said he picked up from tourists. He also speaks Korean, French, Spanish, Malay, Filipino and Hainanese.

The original video has been watched more than a million times and shared by many Chinese media outlets. The Weibo topic page for “Cambodian boy wants to go to university in Beijing” has been viewed more than 7 million times.

“If he is interviewed by Japanese media, he’d say he wants to go to the University of Tokyo, and Seoul National University to Korean media. Maybe he might say he wants to go Nanyang Technological University if Singaporean media talks to him,” one user said.
https://www.scmp.com/news/china/society ... ation-star
Cambodia Expats Online: Bringing you breaking news from Cambodia before you read it anywhere else!

Still not impressive because that's just not possible!

oh ye of little faith
In a nation run by swine, all pigs are upward-mobile and the rest of us are fucked until we can put our acts together: not necessarily to win, but mainly to keep from losing completely. HST
Top

Salik's family is struggling under a load of debt repayment. Will they be saved by the internet ?

Cambodian internet sensation and his mum contemplate the big time after video goes viral
28 November 2018
The recognition Salik has received, however fleeting it may prove to be, has been a blessing for the family, [Salik's mom] says, because they have been struggling to fulfil their hopes for him and his siblings – receiving a good education and improving their job prospects.

Mann and her husband, Sun Vuthy, 41, who sells pictures he paints of the Angkor temples, moved to Siem Reap 10 years ago hoping to earn a living from tourism. Sun used to make about US$10 a day, but not any more, she says.

Like many Cambodians whose livelihood depends on selling souvenirs at Angkor, the family has found themselves in debt, Mann says.

“We bought a plot of land and built a house, but it became more and more difficult to make enough money. I have weeks where I don’t earn a single dollar, yet I still have to pay the authorities US$5 a month to be allowed to sell souvenirs near the temple,” she says.

Mann says the family has racked up debts of US$50,000, making it impossible to send her boys to a private school so they can improve their language skills.

“At some point we had to borrow money from a private lender, but the interest was very high [15 per cent to 20 per cent].”

Medical bills for her ailing mother and the expense of sending her to Thailand for treatment got them into a deeper hole.

“Right now I still owe private lenders US$30,000 and the bank over US$20,000. The bank now wants me to pay US$700 a month. If I don’t pay it back on time, they will add the interest that I still owe them to the loan. I don’t want that to happen,” she says.
https://www.scmp.com/lifestyle/travel-l ... mplate-big
Cambodia Expats Online: Bringing you breaking news from Cambodia before you read it anywhere else!

Happy end for this lad ?

Cambodian internet star who charmed tourists in a dozen languages arrives in China to chase university dream
Published: 4:42pm, 16 May, 2019
The Cambodian teenager who became an internet star in November for hawking souvenirs in several languages has enrolled in a private middle school in east China’s Zhejiang province and wants to go to a top university in Beijing.

Thuch Salik, 14, was greeted with song and dance by students from Zhejiang Hailiang Foreign Language School when he arrived at Pudong International Airport in Shanghai on Monday.

He then went to the school in Zhuji, about three hours from Shanghai by road.

Hailiang Group, a copper products manufacturer in Zhuji and owner of the school, said it would sponsor Salik’s education and half of his living expenses through his university years, including postgraduate studies if Salik would pursue them, a Hailiang spokeswoman said.

“He is very independent and adapting well,” said Hannah Wang, Salik’s teacher. “He is studying fundamental Chinese and he is coping with the studies in English and maths because there is curriculum difference between the two countries.”

Wang said Salik was doing very well in subjects that needed hands-on skills such as painting, music, physical education and computing.
“He will have more advanced lessons once he overcomes the language barrier,” Wang said.

Salik became an internet sensation after a tourist posted a video clip of him online selling souvenirs in at least a dozen languages and dialects.

Salik told reporters that he enjoyed speaking Chinese and wished to go to university in Beijing. The video was seen by Feng Hailiang, chairman of the group, who was impressed by Salik and wanted to help the boy realise his dream.

Feng approached the family and arranged them to visit China for four days, including a school tour in January. At first Salik’s parents hesitated and stepped away from the offer. They changed their mind recently and company officials went to Cambodia on Friday to help with Salik’s visa application, the spokeswoman said.
https://www.scmp.com/news/china/society ... -languages
Cambodia Expats Online: Bringing you breaking news from Cambodia before you read it anywhere else!

UPDATE: Sometimes dreams come true.
From poverty to fulfilling the impossible: Life for Cambodian boy linguist after viral fame
It has been two years since Thuch Salik, who can speak 16 languages, went viral because of his gift. The series Beyond The Viral Video finds out how the turnaround in the 16-year-old’s life has gone.
Cambodian boy linguist Thuch Salik’s life has changed out of all recognition.
By Arulnathan John
By Larissa Ong
12 Dec 2020 06:30AM 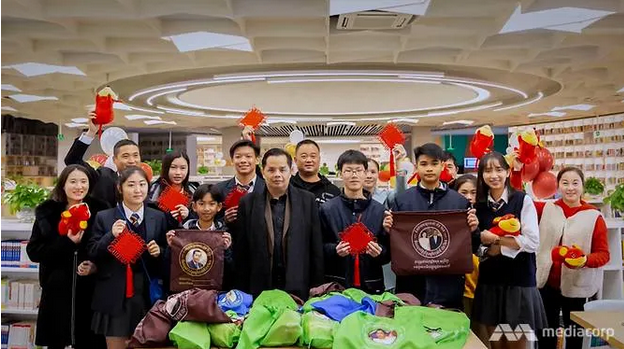 PHNOM PENH: Until he turned 14, Thuch Salik’s world revolved around the streets of Siem Reap, Cambodia, where he had to peddle trinkets and souvenirs to tourists to help support his parents.

Home was a shack outside Angkor Wat, and he only had time to go to school for half the day. But he loved to learn, and dreamt of pursuing his studies overseas in the face of poverty and debt.

Impossible as it seemed in 2018, the teenager found himself transplanted to a high-end school in China last year, the only Cambodian at the Hailiang Foreign Language School in Zhejiang province.

He was “a bit scared”, but he knew it was a “brilliant” opportunity.

“When I was in Siem Reap, we didn’t have good livelihoods,” he said. “I could only study in school. And after school, I helped my mum to sell stuff. And I had almost no time to play with my friends.

“Nowadays, there’s a lot more studying. After school, during my free time, I have a lot more friends to play with.”

It is a turnaround arising from a viral video of him and his gift: He can speak 16 languages.

Having taken the Internet by storm, and with the ensuing change in his family’s fortunes, his ambitions are set to go further: Now 16, he hopes to be a businessman and give back to his homeland.

He is even being talent-groomed to burnish his star quality, on social media and maybe in business one day, the series Beyond The Viral Video [below] discovers.
https://www.channelnewsasia.com/news/cn ... e-13755764