Xmas or No Xmas ?

This is a part of our Cambodia forums to chat about anything Cambodia-related. This discussion forum is at the top of our site because it's usually the busiest part of the expat community chatter with random topics on just about everything, including expat life, Khmer politics, Cambodian blogs we have or have come across, or whatever else our members want to discuss. Whether you're an expatriate, tourist, Cambodian or random traveler just passing through South East Asia, you are welcome to talk about anything or start new topics yourselves.
Post Reply Previous topicNext topic
38 posts

The huge fuss about it when you live in the west can be annoying. It was a good time to visit home though as many, like myself, lived abroad and it was likely the only time you'd meet in the year. As for here, the Christmas songs in shops are an earache, but I don't get to hear them so much. I don't put up decorations but I have always gone for a Christmas dinner while I've lived here. I've always gotten the kid presents too. I even told him there was a Santa for a few years but that didn't last long. He started asking how come none of his friends in the neighborhood got anything and I didn't think telling him it was because they were all heathens would work.

What does it mean to expats living in the country of Cambodia? For myself these days, the 25th of December is only entered and passed has another day, but this day and the days around will certainly have thoughts of family and friends, of the times together over the years, of this special days holiday celebration of giving and receiving gifts, but mostly being together and thinking of each other, eating a well prepared meal, more so, with added extras, on this special day, unlike past years where the day would be celebrated for mainly the purpose of my children’s enjoyment, has it was the same for my childhood, now my grandchildren too enjoy the Christmas festivities.
What is Christmas, what of this day. Christmas is the observance of Jesus’ humble birth to a virgin in a stable in Bethlehem. The holiday also celebrates the events surrounding his birth, such as an angel’s appearance to shepherds, telling them to visit the new born king. Although the Church doesn’t consider it the most important Christian holiday, Christmas is certainly the most popular, at least in terms of cultural and social significance.
I don’t consider myself to be practically a religious person to be celebrating the day in this type of way, but because it is the day of the people with the belief the thought is there, even if not for me, but for others, such at the times, my neighbour was a Vicar, religion obviously would have been deeply rooted for him and his family’s involvement with the church. The day, and those surrounding may give me special thoughts and remembrances of my past family and friends. Once I suffered the illness of drug resistance TB (what us travellers can endure visiting foreign lands) the illness took much treatment and fighting over a number of years. I was now down to 38kg, rushed into hospital, my specialist doctor waiting on my arrival too examine me. I asked what is the problem now, he spoke you may not be with us tomorrow, the sister nurse asked if I wanted a priest, I replied I am not overall religious. She, with belief and authoritative voice told me now, is the time you should be. I told her to “feck off”. I was a single parent, now wasn’t the time to leave my kids, what of their Christmas in a few weeks’ time, maybe someone was listening.

A little information I found about Religion and Christianity of Cambodia –

Buddhism in Cambodia dates back to the 5th Century AD, with traces originating from as early as the 3rd Century BC. Since the 13th Century AD, Theravada Buddhism has been a state religion in Cambodia and is currently estimated to have a following of approximately 95% of the country's population. Theravada Buddhism is said to have been practiced in Cambodia for at least the last two thousand years. Buddhism found its way in Cambodia through two different ways, and the first one was through Hindu merchants entering the Funan Empire while the second form of Buddhism assimilated into the Khmer culture during the Angkor Empire when Buddhist traditions of the Mon people were absorbed by the Cambodians.

Religion has always been a primary source of cultural inspiration to the people Cambodia. For nearly 2000 years and more the Cambodian people have established a unique spiritual belief of the Khmer from Animism to Hinduism and Buddhism. Religion in Cambodia is believed to have been heavily influenced by oceanic merchants who brought the Indian culture to the Southeast Asian ports on their way to trade in China. The Funan Kingdom was the first Khmer state to assimilate the religious beliefs brought by the merchants.

Gaspar da Cruz, a Portuguese member of the Dominican Order, was the first recognized Christian missionary to enter Cambodia between 1555 and 1556. According to Cruz, he felt that his mission was a complete failure since the Bremen’s were the hardest people to convert because the King would never approve. During his mission, he was only able to baptize one person, at his death bed before leaving Cambodia. Later on, Baptist missions were located in Battambang and Siem Reap provinces. In 1923 a Christian and Missionary Alliance was established in Cambodia and by 1962 they had converted around 2000 people. American Protestant missions were mostly popular among the hill tribes and the Cham and after the Khmer Republic was established resulting in the growth of Christianity.

I must say, I have not taken much notice of Christmas time in Cambodia over the years I have been here, saw my first Christmas tree in the bank. Yes, when I had the bar, I would wish customers happy Christmas, but I have not really come across westerners or Khmer having big celebrations on this day, no doubt some do. I have not personally been to any of the shopping malls in the big city, I only hear or read of their decorations, but like anywhere today Christmas is commercialised, a way of shop owners to reach out to customers and make a sale. I know the times previously I have spent in Thailand; they have embraced the season of good will with first class decorations, but I don’t think first priority is on the religion of Christianity, but like anywhere worldwide it’s a time for commercial sales the gain of profits. I may come across to some, who would use the word humbug in my direction, I respect the wish of people celebrating this day for whatever reasons they have, religion or the giving, eating drinking with family and friends, we all have our own ways and needs for anything in that of our todays life. I hopefully may buy a good takeaway, or cook myself a meal, I sometimes wish I had an oven to cook a good roast, also being a Yorkshire man I tend to miss my puddings especially at this time of year, although we adapt, so I make the flat ones like we did in the poorer days.

Shit it’s the 24th I never realised. Christmas Eve, too hot for Santa, don’t hear the bells of reindeer and I have no chimney. But I noticed a bar I visit from time to time is nicely trimmed up, maybe time for a cold beer and welcome the time of year. 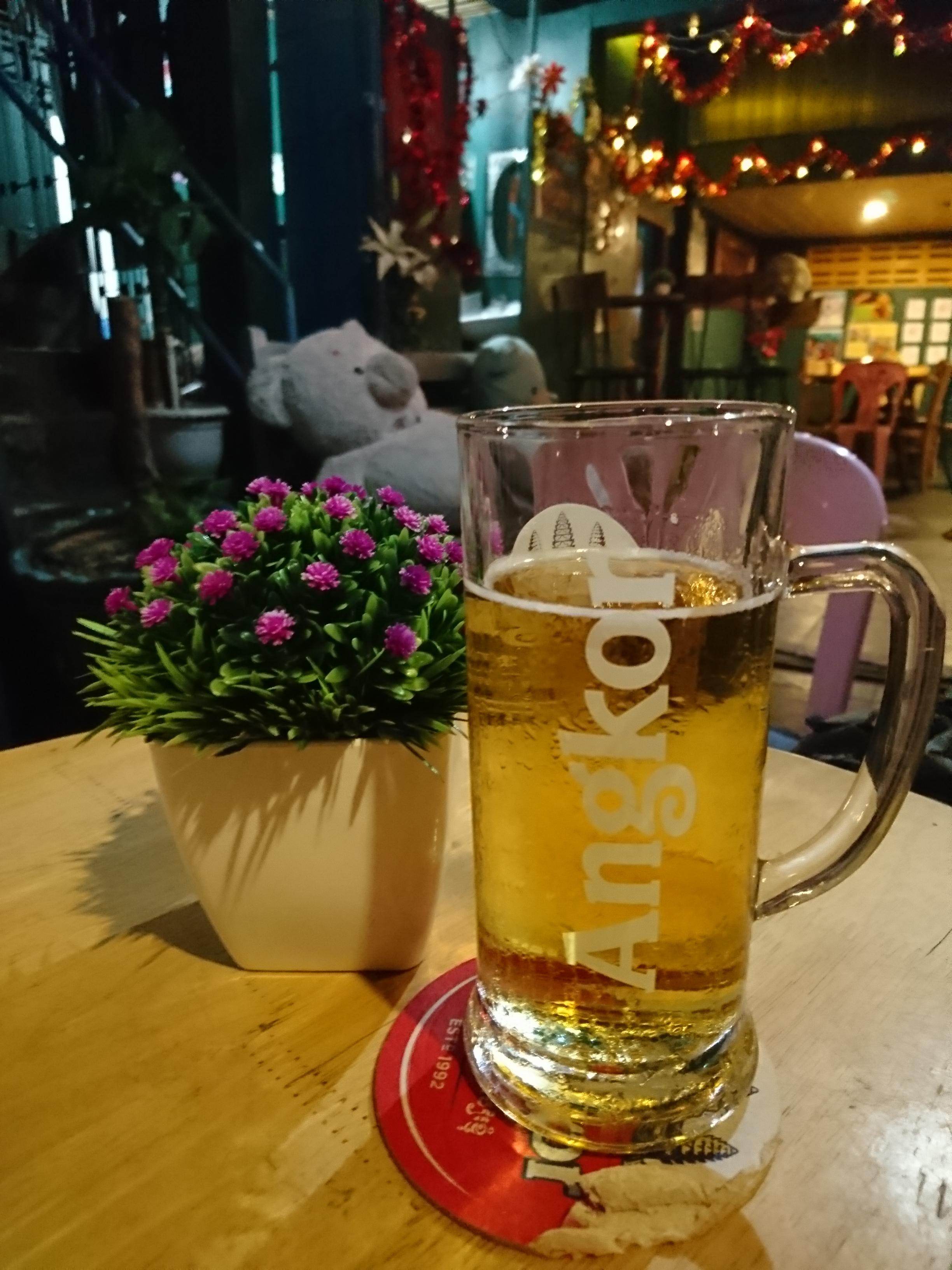 Merry Christmas and all the best to all CEO members, enjoy whatever you do

I'm hoping that Stroppy will drop in with another Christmas sermon like the one from last year. I just reread it yesterday and still think that it is outstanding.
Top

Joker Poker wrote:I'm hoping that Stroppy will drop in with another Christmas sermon like the one from last year. I just reread it yesterday and still think that it is outstanding.

I prefer his bunny stories.
Once you've read the dictionary, every other book is just a remix.
Top

I understand that the songs are annoying, and depending on where you live the weather can be too cold (or fantastic if in Cambodia).

Even taking that into account I don't understand those that seem angry about the holiday. The sight of decorations alone seems to get some people angered.

Is it bitter expat syndrome? Xmas embodies Western living and any reminder of your former life is bad? It was never a huge deal for me when in Cambodia, the holiday passed by some years and I barely noticed until my kids were born. It certainly didn't get me angry.
Top

Xmas doesn't have religious meaning for me..that, and given I've seen quite a few go by, I don't get too excited about it these days. Having said that, seems a good occasion to get together with family and friends albeit for me these days they are split between two countries.

Anyway, I would like to wish all members of CEO a festive Christmas

Here in viet its more popular than thr KOS,went to midnight mass will have a dip in 20mins,boththings i did with a long departed friend during our development yrs,this yr it will be in a warm but turbulent sea not The Leeds and Liverpool canal,im on my 2nd tinnie and A HAPPY XMAS TO YOU ALL

As an adult atheist who believes religions are the enemies of reason, I should say "No Christmas". However, as Francis Pharcellus Church penned on Sept. 21, 1897 in the New York Sun -

Merry Christmas.
You could be next.
Top