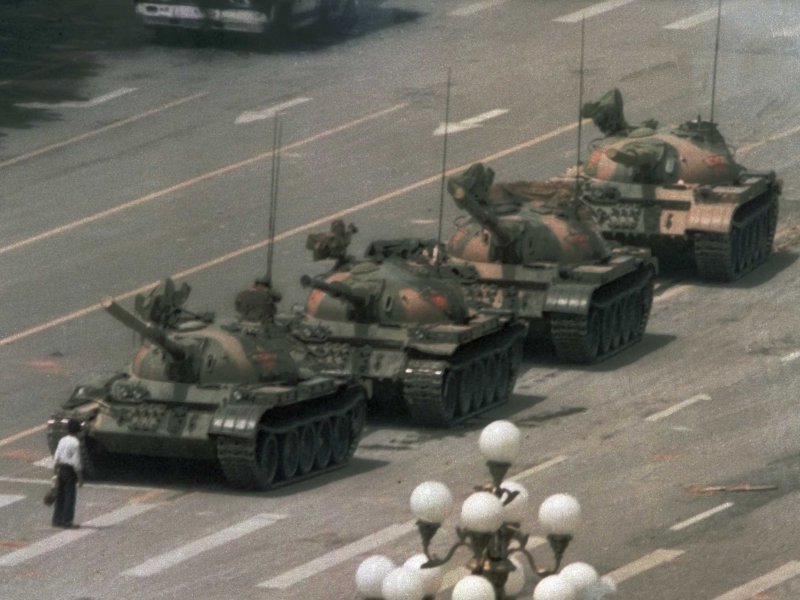 In this June 5, 1989 file photo, a Chinese man stands alone to block a line of tanks heading east on Beijing's Changan Blvd. from Tiananmen Square in Beijing.


The 25th anniversary of the Tiananmen Square massacre is this week, and China is taking extreme measures to make sure nobody commemorates the event.

In 2012, China Digital Times identified more than 100 search terms China bans around the anniversary of Tiananmen Square. The country has already shut down Google services ahead of the 25th anniversary.

The government puts a lot of effort into erasing the 1989 massacre from books, TV, and internet resources that are available to its citizens. China's younger generation seems mostly unaware of the student-led, pro-democracy Tiananmen Square protests in Beijing that drove Chinese soldiers to kill hundreds (or possibly thousands) of people.

Some of the words and terms the government has blocked seem odd and out-of-place, but they're tied to the event and could bring up information about it. Some of these words were coded in an (unsuccessful) attempt to evade Chinese government censors.

Big yellow duck (because an image circulated online showing giant toy ducks replacing military vehicles in the Tank Man photo, the same photo at the top of this post)
Tank Man (a reference to the above photo of a lone protester trying to block tanks)
Shanghai index (a reference to the Shanghai stock market closing down 64.89 points on 2012's anniversary)
63 + 1 (because it adds up to 64, or June 4th)
Candle (because the candle emoticon is commonly used online to mourn deaths)
Today
Square
Mourn
When spring becomes summer
That year
Special day
Pillar of shame (a reference to sculptures symbolizing those who died in the massacre)
Victoria Park (where some of the sculptures were placed)
Black shirt
Redress
Take to the streets
Against bureaucratic profiteering (because it's part of a slogan from the Tiananmen protests)
Suppress
Tank 25 Photos From The Tiananmen Square Protests That China Has Tried To Erase From History
http://www.businessinsider.com/tiananme ... -yaobang-1
Top

I would say the best way not to attract attention to it is not mentioning the event in the first place, doh!

Much respect to the students who tried to improve the lives of their fellow Chinese in the face of sheer brutality. They were on the right side of history. Jaap N. wrote:I would say the best way not to attract attention to it is not mentioning the event in the first place, doh!

Jaap N. wrote:I would say the best way not to attract attention to it is not mentioning the event in the first place, doh!

The tank man is really an inspiration. He stood his ground in a big way.
Top
Post Reply Previous topicNext topic
6 posts • Page 1 of 1