Trolls just want to have fun.

That's the name of a paper by Buckels, E., Trapnell, P., and Paulhus, D (2014, Elsevier) in a special edition of Personality and Individual Differences, 67, called The Dark Triad of Personality (97-102). DOI: 10.1016/j.paid.2014.01.016 in which the authors propose that Internet forum trolling is an expression of the triad of sadism, psychopathy, and Machiavellianism, with sadism having the strongest correlation to sadism. They further contend that trolling sadism is a direct extension of IRL sadism. The triad describes posters that delight in the hurt of others, an antisocial personality disorder, and are unemotional and deceitful.

What I particularly enjoyed about the Time article is that it discusses the 'online disinhibition effect' which partially describes pathetic keyboard warriors, and links to "the less scientific name" http://knowyourmeme.com/memes/greater-i ... wad-theory" onclick="window.open(this.href);return false;

I originally found this paper following a trail from 'Elite Daily - The Voice of Generation Y'. http://elitedaily.com/news/technology/t ... ychopaths/" onclick="window.open(this.href);return false;
Bodge: This ain't Kansas, and the neighbours ate Toto!
Top


Threadjack To take over the content of a message thread by changing the subject of discourse to a topic outside the purview of the original subject and/or forum, while maintaining the subject line. A form of amusement for trolls. Threadjacking is distinguished from flaming, as flames are a quasi-personal attack on a poster or on a poster's style of discourse, where threadjacking is deliberatly steering the discussion offtopic. http://www.urbandictionary.com/define.p ... Threadjack" onclick="window.open(this.href);return false;

And thanks also to David Bradley for this mantra:

“I do not engage in confrontations with anyone, in-person or online. This is a waste of time and energy. If I have caused harm, I apologize and fix the situation. However, if someone simply doesn’t like something I have done or something that I do or disagrees with me, that is fine, but I’m not going to get into an argument about it. For any confrontation-like situation, I simply take a deep breath, relax, breathe out, and re-focus my efforts back on my work and goals. http://www.sciencebase.com/science-blog/zen-habits.html" onclick="window.open(this.href);return false;”

I wish I was a zen master like David - I'm not.
Bodge: This ain't Kansas, and the neighbours ate Toto!
Top

What a fun coincidence, I read the 5-page academic article yesterday during my flight. It was interesting but I was feeling the paper lacked a definition for "trolling."
Maybe there was one in the full paper and research proceedings.
Also, it was limited to Internet users in the US.

I got intrigued though by their tests to measure the "Dark Triad and Tetrad" (sadism, psychopathy, Machiaviellanism plus narcissism). I'm curious about taking those tests!
Disclaimer: I don't actually look like my avatar.
Top

That IS a fun coincidence!
Bodge: This ain't Kansas, and the neighbours ate Toto!
Top

i think this analysis is too simplicistic.

for starters, there's a big difference between random trolls who have fun from time to time and hardcore trolls who spend their life online and write hundreds of flamebaits per day.

so at the very least they should define a scale to classify trolling.

i don't think there's any sadism in random trollers, certainly they do the same pranks even face to face.

seems many of our posters follow some (and a few many) of the below when posting;

The 15 Rules of Web Disruption'

1. Start a partisan divide-and-conquer fight or otherwise push emotional buttons to sow discord and ensure that cooperation is thwarted. Get people fighting against each other instead of the corrupt powers-that-be. Use baseless caricatures to rile everyone up. For example, start a religious war whenever possible using stereotypes like “all Jews are selfish”, “all Christians are crazy” or “all Muslims are terrorists”.
Accuse the author of being a gay, pro-abortion limp-wristed wimp or being a fundamentalist pro-war hick when the discussion has nothing to do with abortion, sexuality, religion, war or region. Appeal to people’s basest prejudices and biases. And – as Sweeney explains – push the author into a defensive posture:

read them all here;http://www.washingtonsblog.com/2012/08/ ... ation.html
In a nation run by swine, all pigs are upward-mobile and the rest of us are fucked until we can put our acts together: not necessarily to win, but mainly to keep from losing completely. HST
Top

StroppyChops wrote:That IS a fun coincidence!

Yes I put this info up on K440 July 26th last month, was surprised to see it come up here, as its rather unusual stuff!
" An interesting paper by Buckels et al. on trolling personalities 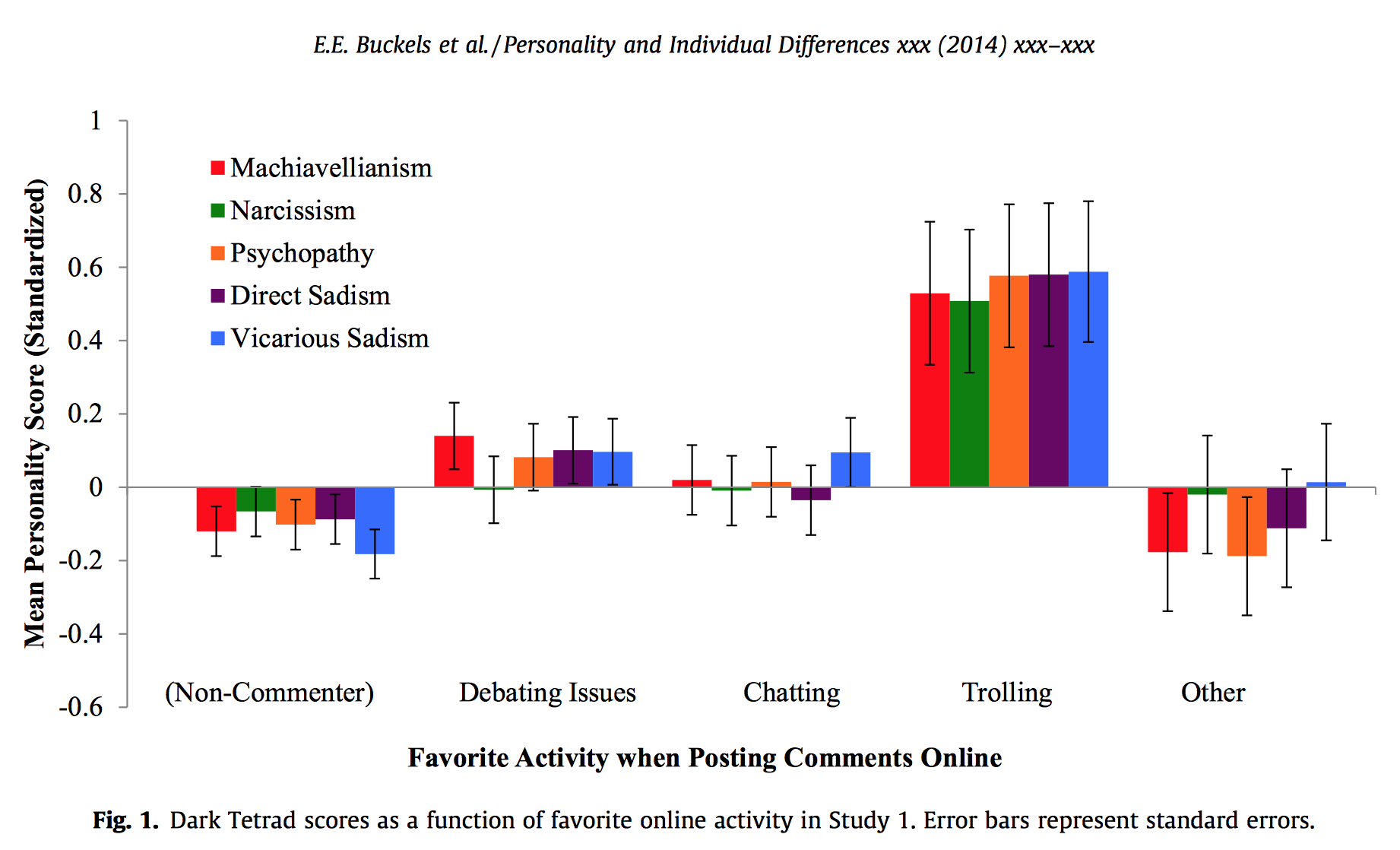