The story of Samneang Moul: From Cambodian refugee camp to the world stage

The story of Samneang Moul: From Cambodian refugee camp to the world stage 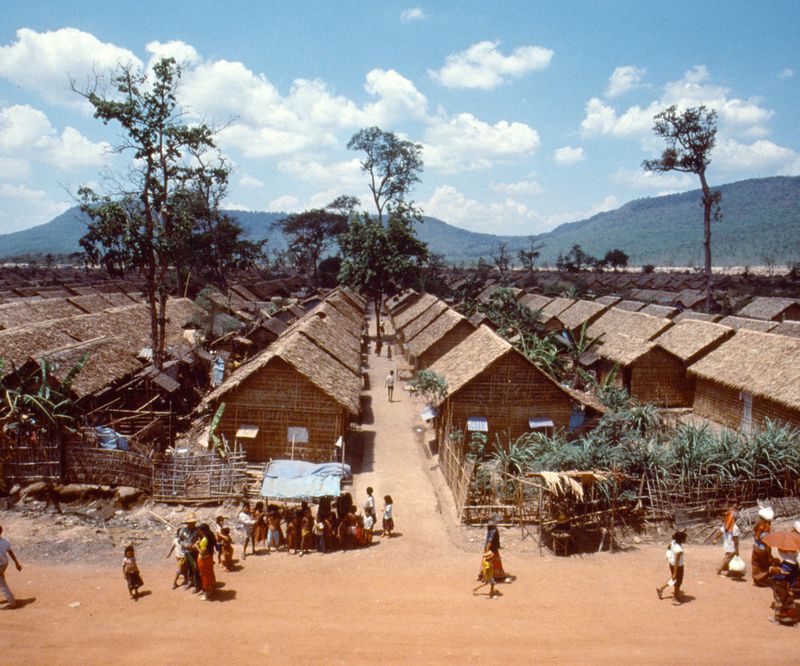 Refugee camp in Thailand in 1988, when Cambodian Samneang Moul, 25, was living there. (Chris Walker / Chicago Tribune)

One day in 1979 they awoke to find their guards had disappeared, then heard that the Vietnamese had invaded Cambodia and the guards were called to fight.

We went in at 8 a.m. and had to be out by 5 p.m., the same as all international workers in the camps. At night the tens of thousands of inmates, who were not allowed to leave the camp, were prey to robbery, assault and rape by corrupt Thai guards or by criminal gangs and armed Cambodian militiamen on leave from fighting a Vietnamese army that occupied Cambodia at the time.

“I ate anything that birds and animals ate,” she said, because rations the Khmer Rouge provided were too little to keep them alive. They worked sunrise to sundown seven days a week. “I suffered from malarial fever and constant hunger, but you had to work anyway. If I was too sick to work, they cut my rations even more.”

They and 300,000 other fleeing Cambodians reached the border and were put into makeshift camps. It was no liberation. They remained in an empty, desolate camp existence year after year because Thailand, for its own geopolitical reasons, refused to let any of them be resettled in other nations.

By the mid-1990s, my contact with Moul was sporadic, so I was in the dark about the remarkable career she was building. At The Asia Foundation, she became an authority on women’s empowerment, gender-based violence, trafficking of women and children and women’s access to higher education.

One of 400 participants at the Obama summit, at one point Moul and 10 others were chosen to sit in a roundtable discussion with former first lady Michelle Obama, who oversees the Obama Foundation’s Girls Opportunity Alliance, which pushes for the very things Moul has dedicated her work to doing.

full https://www.chicagotribune.com/opinion/ ... story.html
The idea that seeing the world is going from place to place to look at obvious things is an illusion natural to dull minds.
Top

Re: The story of Samneang Moul: From Cambodian refugee camp to the world stage

Crikey I walk down my 'poor' street and everyone has an SUV.