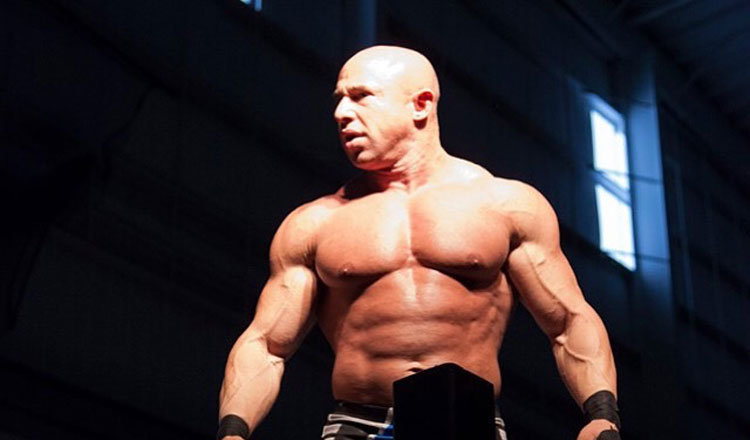 “One of my biggest inspirations is Dwayne ‘The Rock’ Johnson and someday I plan to be as successful as him,”

Damon Divine, the muscular dude who prowls the Pub Street precinct by night spruiking for OWE Angkor Warriors, a new fight club where he also performs nightly as a professional wrestler and has just been promoted to venue boss.

But while his acting career is currently on hold, his previous work keeps popping up on screens around the world. Before leaving the US he worked on a video clip for Flula Borg, an LA-based YouTube personality, whose talents range from DJ-ing to comedy. In the video ‘Self Care Sunday’, Damon plays Robert, a personal trainer decked out in dubious pink gym gear who ends up dead, and a still from the video featuring Damon made it onto the album cover.

“This is the movie that gained me my Screen Actors Guild status,” he explains. “Working on ‘Birds of Prey’ was not only one of the best experiences of my career but a turning point, too.

In 2018 he played a soldier in the movie, ‘Bumblebee’, a sci-fi film based on a Transformer character, and in 2018 he also landed a small role in the movie ‘Alpha’. Talking about the experience on the big-budget movie, Damon says, “I played a Neanderthal. On set I worked with the same prosthetic and makeup team that worked on ‘The Walking Dead’. It took about two hours to complete my makeup and prosthetics. We filmed at one of the studios in Los Angeles and the scene followed a group of Neanderthals, holding long spears, chasing down some buffalo.

full.https://www.khmertimeskh.com/50688367/t ... d-the-mask
The idea that seeing the world is going from place to place to look at obvious things is an illusion natural to dull minds.
Top

Re: The man behind the mask