This is a part of our Cambodia forums to chat about anything Cambodia-related. This discussion forum is at the top of our site because it's usually the busiest part of the expat community chatter with random topics on just about everything, including expat life, Khmer politics, Cambodian blogs we have or have come across, or whatever else our members want to discuss. Whether you're an expatriate, tourist, Cambodian or random traveler just passing through South East Asia, you are welcome to talk about anything or start new topics yourselves.
Post Reply Previous topicNext topic
43 posts 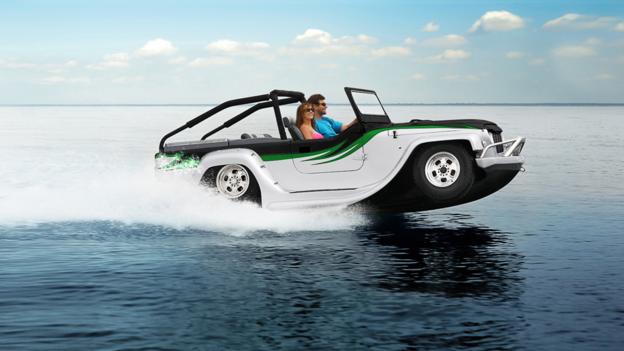 For decades, inventing a commercially viable amphibious car has remained a quixotic pursuit, right up there with robot maids and personal jet packs. Well, it may at last be time to strike one challenge from the list. The Panther, built by Fountain Valley, California-based WaterCar, is ready for its close-up.

Evoking a playful, James Bond vibe, the Panther is navigating water already churned by some short-lived predecessors, including the 1960s Amphicar from Germany and the more recent Gibbs Aquada, a Mazda Miata-like contraption that billionaire and serial adventurer Sir Richard Branson piloted across the English Channel in 2004.

â€œOnce you enter the water, you put the transmission in neutral, pull a knob to engage the jet, push a button to raise the wheels and off you go,â€ he explains. â€œThen you just reverse the process when exiting the water.â€

Power comes from a Honda-sourced 3.7-litre V6 engine (the same one used in the last-generation Acura MDX sport-utility vehicle) matched to a four-speed manual transmission. On water, aided by hydraulically powered retractable wheels and a moulded fibreglass hull (the fruit of more than 100 test designs), the engine enables the 15-foot-long, 2,950-pound Panther to max out at a more-than-respectable 44mph. On terra firma, the craft will hit 100mph (though the company cautions that speeds above 55mph are not advisable).

Selby says the Panther, which is capable of carrying about 700 pounds, is unsinkable, thanks to a hull cavity filled with 32 cubic feet of closed-cell foam.

A complete, turnkey Panther sells for a cool $155,000; a $126,000 "turnkey minus" model allows buyers to install the engine of their choice (provided said engine is a 3.5- or 3.7-litre Honda V6). Selby says WaterCar has sold close to 100 Panthers so far, with customers ranging from Middle Eastern sheiks to Silicon Valley titans.

But if youâ€™re itching to take a Panther on your next romantic getaway, plan ahead; the wait for delivery is presently about 15 months â€“ plenty of time to make it through the 920-page Chapman Piloting & Seamanship.
Jesus loves you...Mexico is great, right?

Back in the late '60s I almost bought a used Amphicar. I could have gotten it for very little money, but today collectors are paying big for them.
Top