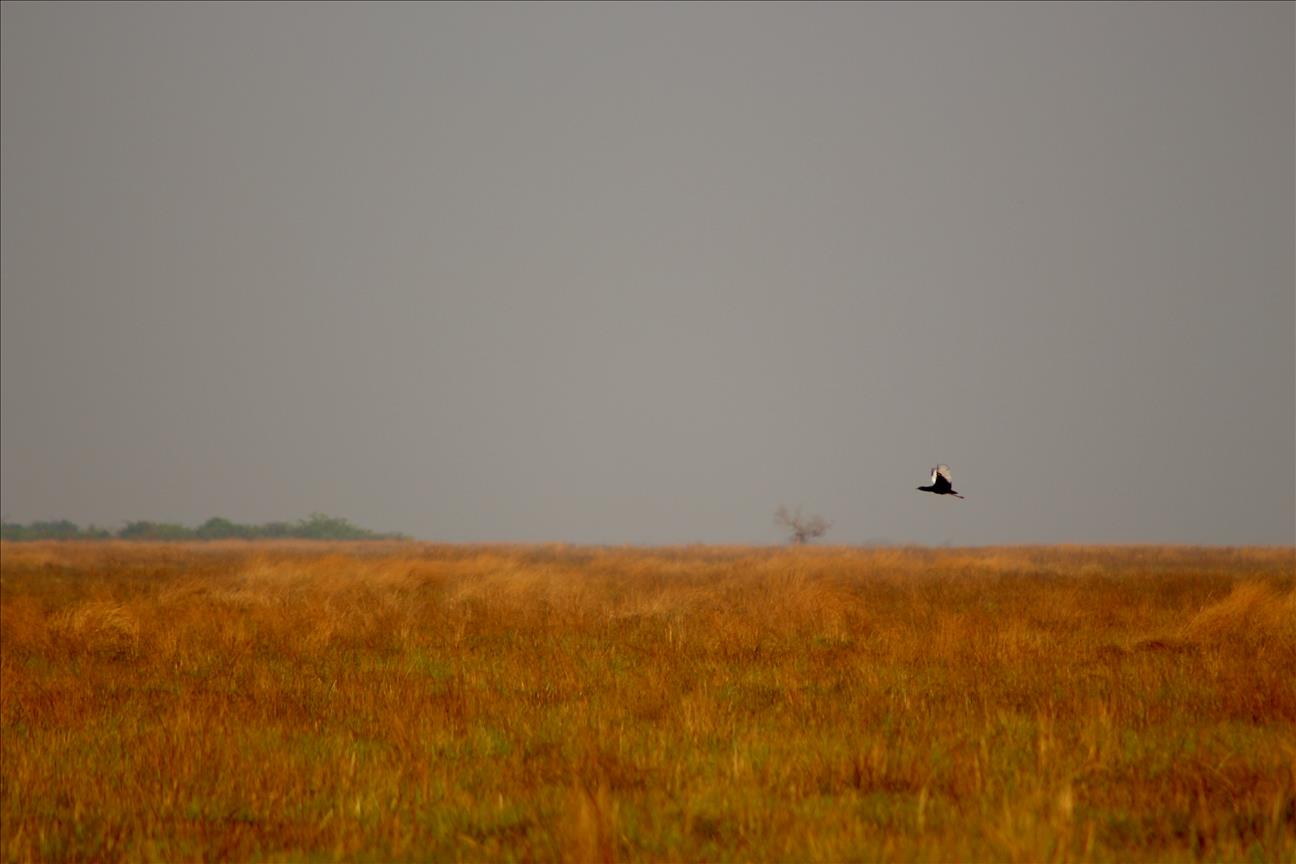 A florican flying in the distance. © Harriet Ibbett

It had been another hot, humid night spent shuffling to sleep on wooden slats – my three research assistants had adopted hammocks, but I simply couldn't stand being surrounded by polyester in 35°C. Even at 4am, it was just too hot. Above me, the deep fiery hue of dawn spanned the sky as far as the eye could see. Swifts swept in among the palms, clearing the skies in a feeding frenzy.

I'd been in Cambodia six weeks, and this was one of the last villages left to survey. I was researching the impact of local communities' livelihoods on a critically endangered bustard species; the Bengal florican (Houbaropsis bengalensis). Fewer than 1,500 florican remain globally, over 60% of which seasonally reside in the grasslands of Kampong Thom province, central Cambodia

People I've met typically assume my time is spent in vast vistas, surrounded by swathes of jungle, spotting exotic wildlife. For me the reality is sleeping on a plank alongside cattle, surrounded by farmlands. I'm a member of the Interdisciplinary Centre of Conservation Science at Oxford University, and unlike typical ecological or biological approaches to conservation, we use a broad range of techniques developed from disciplines as varied as sociology, anthropology, psychology and economics to enhance understanding of complex socio-ecological systems. My research in Cambodia, recently published in Oryx , is reflective of our lab as a whole; instead of spending time in the field monitoring wildlife, we usually work in communities, trying to understand human behaviour.

It was believed dry season rice was typically grown between December and March. However, my interviews revealed that nearly half of all dry season rice farmers now farm two crops of rice a year, extending the rice cultivation season into June. This is a relatively recent and previously undocumented trend, with significant implications for florican, who visit grasslands from February to July. Expansion of dry season rice not only means less habitat is available for floricans to forage and breed, but it also reduces the time for which it is available. Floricans return to the same large territories each year to mate. This means the miniscule populations that remain are likely returning to increasingly sub-optimal habitat.