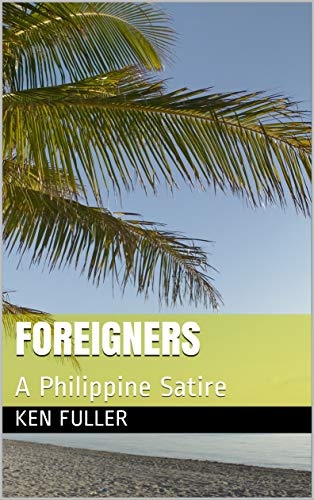 The objectifying Western male gaze is at times excruciating.

THE WORLD of the Western ex-pat in Asia is ripe for fictionalisation. Yet it’s a terrain potentially prone to unpleasant stereotypes and its harsh realities of inequality and predation require a delicate and skilful touch.

Many of us have an image of the expat in Thailand or the Philippines as an older white male seeking an easy life of sun, sea, cheap beer and sex tourism.

In Foreigners, a sprawling satirical caper by long-time Philippines resident Ken Fuller, the image is reinforced though also undercut by characterisations that are sometimes sympathetic, sometimes repulsive.

Fuller’s novel is inhabited by a motley cast of middle-aged male expats who can’t stay out of trouble and their misadventures culminate in a battle against a rapacious US corporation, in which the anti-heroes become the unlikely allies of the exploited Filipinos

In this shaggy-dog story about men of a certain age and outlook, former London copper Clive Barker — a particularly well-drawn study of a hopeless loser looking for redemption while leaving chaos all around him — keeps company with a shady Australian yachtsman, an American ex-cop, a farmer from Ohio, a self-doubting New Zealand poet and a dope-smoking Englishman, among other minor no-gooders.

Fuller draws us into a world of beach bars, sleazy hotels and uneasy relations with locals, including greedy businessmen, wily politicians, soldiers and long-suffering girls. Tensions can explode at any time and often do, literally.

The episodic plot involves mysterious bombings carried out by some Westerners, investigated by Filipino cop Miraflores but we have to wait more than half way until that more promising thriller element comes into focus.

If this were Le Carre, the terror attacks would seamlessly link up with the dastardly US economic plan, ingredients that would come together like a perfect meal. Here it’s a pub crawl without a map.
There’s a lot of dialogue, some of it lively and amusing, much of it incidental, and detailed descriptions in minor scenes that seem to roll into each other, their significance to the story hard to fathom.

More seriously, minor Filipino characters are sketched in as “brown skinned” or, in the case of Filipino women, “slender” with “pleasing smiles.” The objectifying Western male gaze is at times excruciating. “She was not, he thought, beautiful,” comments the American ex-cop, “and she was carrying a little weight around the mid-riff... But her evenly proportioned brown face was the cutest he had seen in a long while.”

This kind of crude sizing-up tends to undercut any sense of empathy with the Filipinos whose fate we are asked to care about, while the bewildering cast of Anglo-Saxon ne’er-do-wells expands as the book progresses, spreading our attention confusingly among interchangeably unlikeable blokes.
The absence of any fully characterised Filipino, including Miraflores, along with a dearth of significant female characters is a missed chance to explore this setting in a way that challenges the world views of its Western male protagonists.

Foreigners is like being in a bar you can’t remember arriving at, where you have lost the will to leave. The company is unsavoury but, after a few beers, you realise you’re stuck with them until the end.

Independently published and available in hardback, price £12.72 and as an ebook, £2.36.

https://morningstaronline.co.uk/article ... ken-fuller
The idea that seeing the world is going from place to place to look at obvious things is an illusion natural to dull minds.
Top

Re: Satire on expats in Asia leaves a sour taste

The bar girls are available throughout Southeast Asia because they can make more money selling sex than the miserable $10 a day they make working in factories or 7-11. There is nothing wrong with a man using their services so long as he pays them well and treats them with absolute respect. That's why they make themselves available and that's what they want, but like all humans they want to be treated as a person, not an object.

The idiots who are married to Western cows and jealous of the lifestyle men have here can piss off, so can the feminist nuts who help make our home countries uninhabitable with the false sense of entitlement. Here money rules, and it's the same at home on a grander scale, women marry for money and security, female doctors do not marry truck drivers.

The ones that do sicken me are the parents that send their daughters to the "big city" to make money at a young age and pretend they don't know how she does it when she sends home more money than her education could possibly justify. I'd starve before I'd take a dollar my daughter had earned that way.

One of the Thai Princesses made a movie about that around 12 years ago. It actually was a quite decent movie with English subtitles. It didn't belittle the bar girls or the Thai or foreign men who use their services. It villianized the parents who consider their daughter's vagina a family asset. I was teaching at a school at the time and most every child in Thailand was bused to a theater to see it since the princess had made it. As a teacher I naturally went and ended up enjoying it.

I hope nobody buys this silly book and it seems as if the Brtish media is obsessed with jealousy over the men living the good life here. Not so much in the USA probably because they are much fewer of us here.
Top
Post Reply Previous topicNext topic
2 posts • Page 1 of 1