Rules of the Game? 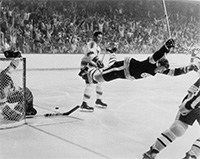 Rules of the Game?

As Convenor of the most Elite Street Hockey League in the Kingdom, I believe I have deep and profound insight into Cambodian Expats and the underlying currents of violence and anger that run through them. I also deal with this small community on a weekly basis, and know at times things can get complicated (bench clearing brawls, people slashing each other, people calling each other names, people threatening to kill each other).

I myself too have experienced and participated in this brutality. Only to go out after the game, apologize and have a drink with a guy a I was just an hour previously trying to kill. (except Mr. Oglethorpe who targeted my head one evening and I have never apologized to him and still wish that he was dead, though I tolerate his presence at the After Game Meet-Up).

Anyways, I believe sincerely that you can learn from some of the experiences that I have learned from.

Now I know you think that most Canadians (for the record are league is only about 65% comprised of Canucks) are â€œnice folksâ€, but anyone that thinks this has never watched a game of hockey in their lives.

The fact is we are savage beasts. As soon as you put a stick in our hands, and tell us to run after a ball we become the most savage animals on the planet.

For this reason the CHL has instituted rules that get enforced by itâ€™s community, and needs very little moderation. (Language being more open to interpretation more so than hockey I know this will be different for you guys) but this is what I suggest:

a) make some basic rules, and ask for feedback and discussion on this list of rules from your community (1 week)
b) have the community participants of your esteemed organization vote on the rules (1 week)
c) if the forum grows, have times when you can come back and review these rules and have the community vote on them again (could be in times of great peril and uncertainty, like when someone gets upset about the rules, which will happen)

In my experience this has saved me from:

1 - time spent trying to be the referee (because I am Convenor of the league I am often looked at to have respectable judgement (a great mistake in my view by the members of the great organization I am supposed to lead) and am so a De Facto Referee, a role I rather loathe, and that can be difficult to occupy when you are at the other teams bench taunting them and saying things like â€œHey mother fucker, you wanna have a go?â€)

2 - I have an excuse when I enforce the rules. That being the fact that we have rules. In one particularly memorable experience after enforcing a simple â€œshoot inâ€ rule, a member of the league accosted me:

â€œBut you made up the rules, they are just the rules in your head.â€

â€œNo I copied most of them from another league that I Googled, mostly because Iâ€™m lazyâ€.

â€œNo that was the community, I asked for their feedback, and then we put it to a vote, and everyone agreed that was a good rule, I think in more intellectual circles they call that democratic.â€

To which then he could only look at me with his mouth agape.

And now that we have rules, instead of going out every week and having to be the sole referee, we now have 15 referees which make the fights and violence even more severe, pleasurable and easier to make amends about afterwards.

But at least when shit hits the fan and gets out of control, I can point to the document and say, â€œLook, you see, we wrote it downâ€.

Mr. James Oglethorpe Jr.
Official Convenor of the CHL
(The most elite hockey league in the Kingdom of Cambodia)
Top

CambodiaHockeyLeague wrote:.... and know at times things can get complicated (bench clearing brawls, people slashing each other, people calling each other names, people threatening to kill each other).


.... we now have 15 referees which make the fights and violence even more severe, pleasurable and easier to make amends about afterwards.

Your hockey games have just become that little more interesting.
The idea that seeing the world is going from place to place to look at obvious things is an illusion natural to dull minds.
Top

AND they have t-shirts.
Bodge: This ain't Kansas, and the neighbours ate Toto!
Top