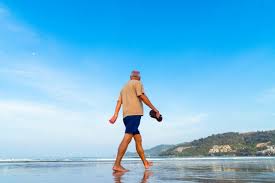 Local families take people in and feed them for a just a few dollars a week. You just have to see it as an adventure.

The risks of remaining at home included accounts of wearisome boredom, an inevitable weekly lifestyle, a sense of social isolation (‘no-one cares about old people’), and growing financial disadvantage. Becoming a permanent tourist somewhere else might provide rescue from those circumstances. These concerns were balanced against the attractions of staying home: not having to cope with travel logistics, easy reliance of friends and neighbours for everyday company, and the relative ease of familiar daily routines (though boring).

‘There is a sense of big brother watching everything you do. Don’t park your car there, no dogs, no smoking, fill out this form – rules for every little thing. A real nanny state. I finally got fed up with it once and for all.’

In common for all was the quest for happiness, ease and fulfilment. Apart from two itinerants, every person interviewed said they had not expected that they would be doing this in late life. All born during or just after WW 2, they had had conventional expectations of what their later years would hold for them. Just one American woman said she had long been an adventurer, having worked as a teacher in the Middle East and in various parts of Central Asia until her (peripatetic) retirement. One man had a parallel story as a career navy sailor. But all of the rest expressed some surprise or happily marvelled at their situation now, in their later years. They felt that they, too, had subscribed to their own culture’s expectation of people when they aged. Then, when it happened to them, they sought a means to escape.

Risks such as tsunamis, potential natural disasters, accidents, terrorism or fatal illness were perceived with resignation: these were events well out of the control of the participant. Something disastrous conceivably could happen. This was cast philosophically as simply a case of being in the wrong place at the wrong time.

An American man in Phnom Penh told me: ‘you hear of old foreigners here, found a week or so after they’ve died alone in their apartment. It’s always just called a ‘heart attack’. They get tidied away, no big deal.’