I saw this book mentioned in a thread here. 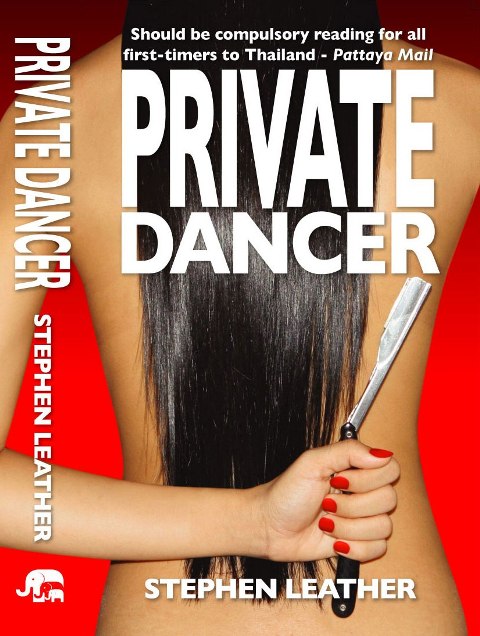 Book excerpt (Pete is the Farang, Park is the local guy and the person telling the story is the bar girl):

"Park waited outside until Pete and Nigel went. I saw him sitting on his motorcycle when I
went out to get a taxi for the farangs and he started pulling faces, trying to make me laugh. I met
Park the first week I worked in Zombie. He's one of the DJs, he's twenty-five and he comes from
Udon Thani. His sister works in Spicy-a-go-go and she's become quite a good friend of mine.
Park's really good-looking and he's got a great body. He and his friends work out at a gym during
the day and they're always comparing muscles. It's really funny when they get competitive about
their looks, they're as bad as girls sometimes. His stomach is really hard, like a turtle's shell, and
his skin is really smooth. He was going out with another dancer when he met me but he chucked
her and said he wanted to go out with me instead. At first I said no but he kept after me,
pestering me until I said okay. The reason I said no was because he had a bit of a reputation.
Mon warned me about him, she said that Park made a bee-line for any new girl if she was pretty
and young, but he told me that I was different, that he really liked me. He didn't try anything on
the first time we went out, either. We went for a meal after work. He didn't have any money so I
had to pay, but I didn't mind that. The DJs earn even less than the waitresses, and besides, I'd
been short time with an old Swiss guy and he'd been really generous so I had two thousand baht.
Park made me laugh a lot, he told me lots of stories about the crazy things that happened in
the bars, and he told me about his family.
I didn't sleep with him until the second date, and it was amazing. He was so gentle with me,
not rough like the farangs, he'd kiss me all over and whisper stuff to me until I'd go all tingly.
Anyway, Park went up to the VIP room with me and we sang duets together and everyone
applauded. He saw the piece of cake with Pete's name on it and made a big thing about eating it.
I fed it to him and then kissed him in front of everyone. I showed him the gold bracelet that Pete
had given me and he wanted me to give it to him to sell. Every month he had to pay five
thousand baht for his motorcycle and he was behind in his payments. I told him that I couldn't
sell the gold because Pete would get angry, but I promised that I'd give him the money the
following day and he said that was okay. He'd bought some yar bar tablets with him and I
swallowed a couple because I was starting to get tired. They perked me up a treat.
After we left the karaoke bar, Park and I went back to his room and passed out. It was a great
night, my best birthday party ever."

p.s.: I haven't read it yet, just found it, and posted it here. I you have read it, please post some reviews. How does it compare to Cambodia?
Top

So that's what "private dancer" referred to in a few posts I read here and there (forgot who mentioned it though).

I'll probably get pissed by the characters and secretly like it.
Disclaimer: I don't actually look like my avatar.
Top

Although a little dated and the ending is so-so, it should be required reading for any guy landing in Thailand or Cambodia. Embassies should fund its free distribution at airports. It could have saved me hundreds of thousands of dollars and four years in corrupt American courts.

Oh, but she's different. She's not like those other girls.
Top

I read it 5 years ago and found it enjoyable if predictable. The protagonist was hilariously naive. IIRC all the characters were caricatures.

A better read is that relationship book where the pages alternate between English and Thai. A great insight into and guide for cross cultural romance.
Scarier than malaria.
Top

LTO wrote:Fortunately, Cambodia is not Thailand.

Unfortunately, it is turning into one. But not in your face like Pattaya.
EVERYONE BOW DOWN AND PAY EXTREME HOMAGE TO HIS MAJESTIES flying chicken©
Top

Joon wrote:So that's what "private dancer" referred to in a few posts I read here and there (forgot who mentioned it though).

I'll probably get pissed by the characters and secretly like it.

Bought this in an airport years ago. The writing is a bit juvenile but it is a highly entertaining and easily readable book with insights into bargirl life in Bangkok and the minds of innocent or naive westerners who think they can have a real relationship with one.

Despite it's limitations it should probably be mandatory reading for every potential sucker coming into Thailand or those that wish to understand the mentalities of such suckers. Well worth investing a couple of hours with.
Taxi, we'd rather walk. Huddle a doorway with the rain dogs
The Rum pours strong and thin. Beat out the dustman with the Rain Dogs;
Top

Talking of Private Dancing. I once went to a strip club in London and had a private dance. But before she got started, she told me that I must sit on my hands, which I did.

Anyway after awhile I pulled them out from underneath me and said to her "hey great it now feels like someone else is grabbing your tits".
According to the proverb: The pun is mightier than the sword
Top

Yeah, a good read , no matter how long you've been around.
Stephen Leather's a solid writer, even if this book is totally outside his usual themes.
Top
Post Reply Previous topicNext topic
10 posts • Page 1 of 1