In Plain Sight: The Life and Lies of Jimmy Savile

In Plain Sight: The Life and Lies of Jimmy Savile

This review is from: In Plain Sight: The Life and Lies of Jimmy Savile (Hardcover)

This is not a book about Jimmy Savile. It is a book about us, the British. Today I saw a picture of a fresh- faced pretty girl smiling at me from the pages of a newspaper. Her name was Cheryl James. She died in 1995 at the Deepcut army barracks, aged 18, from a bullet to the head. The original inquest was a farce with "key witnesses not called, medical records not inspected, and important evidence ignored." An open verdict was recorded but suicide was presumed. The army, Surrey police and successive governments have obstructed the family's attempts to force a proper investigation into her death but the deaths of other young people at the same barracks have finally forced a fresh inquest, albeit nearly twenty years too late. Surrey police refused to allow the parents access to information about their daughter's death and only relinquished the files in their possession when threatened with legal action. You will gain a deeper insight into Surrey police from this book - and the Sussex police, and the North Yorkshire police and especially the West Yorkshire Police Force. You will learn that something is very wrong indeed in the Kingdom of Great Britain.

At his most innocent Jimmy Savile was like a demonically British Forrest Gump. His life links the Moors Murders, the Kray twins, the Yorkshire Ripper, urine-soaked hysterical girls in spasms of beatle mania, couples copulating in shop doorways in the Manchester of the swinging sixties, Margaret Thatcher, the Pope, the Chief Rabbi, the President of Israel and our own illustrious royal family. Savile could go from raping a twelve year old girl in a hospital television room to giving "advice" and doing "favours" for no less than the Duke of Edinburgh, Prince Charles, Princess Diana and Maragaret Thatcher. The town of Otley gave him six teenage girls for the night (in reality five as one outraged father took his daughter home) as an enticement to attend a local event. He openly bragged in books and newspaper columns that parents virtually handed their daughters over to him. He got away with it for three reasons.

First, for whatever reason, he made his way right to the heart of the establishment. The author has written this book after carrying out many interviews over a number of years with Jimmy Savile and when he asked about Edwina Curry's role in handing him the leadership of a task force to reform Broadmoor high security hospital -where he had miraculously maintained a flat for twenty years- he replied that she was irrelevant because he worked with the "real hierarchy." This real hierarchy made him feel so secure in his position that he could behave like a pervert, look like a pervert and openly admit to being a pervert that preyed on the vulnerable in complete confidence that nothing would ever happen to him. He could run a marathon and go for a cup of tea with the Queen. These people have yet to reveal what advice and favours they could possibly have needed from a disc jockey that sexually assaulted brain damaged hospital patients.

Second are the grubby and corrupt police officers, businessmen, celebrities BBC producers and so on, who were more or less actively complicit in his crimes and helped him to cover his traces whether it be by active participation or by turning their backs on the people who tried to speak up when they had been abused. What the author has to say about the West Yorkshire force is particularly illuminating.

Third, are the self-interested and dim-witted middle classes in places like the BBC,the Crown Prosecution Service, health service managers, doctors, nurses and psychiatrists who have so little imagination that they cannot even begin to imagine the evil that seems to inhabit Britain from the shop doorways of Manchester on Saturday nights to behind the closed doors of palaces. He laughed at us all. They laugh at us all. It is not enough to say that he hypnotised us all into thinking that he was a saint and a great guy who "groomed a nation." I lived in Leeds for many years and whilst I never met him I knew people who had, and they seemed to share the opinion of everyone I've ever known comment on him, and a long time before all this came out. He made you shudder with revulsion. He seemed dirty, and dirt, actual physical dirt, is one of the main characters in this book - be it from the rotting flat that he inhabited in Manchester that was so run down that he painted the interior black to hide the filth, to the foul stench reported by those he assaulted and the broken brown teeth encrusted with crab meat so vividly described by the author.

In the end the author did not manage to uncover the truth behind Jimmy Savile. The sexual assaults, paedophilia and possible necrophilia are aspects of a much deeper story that is still to be told. Savile said he was an honest man and I believe him. He looked at evil, recognised it and used it to his advantage and obviously to the advantage of others. How and what he did for these people (and apparently for "the country")I don't know. We'll probably never know. But one thing is certain he was able to do what he did because he was more honest than us. We refuse to see evil especially if it might mean denying our own appetites or disturbing our carefully arranged worlds. The truth is though that while we bury our heads in the sand no one is bringing the "real hierarchy" to account. They leave bodies of young secret service agents in bags and refuse to investigate the deaths of pretty young girls and vulnerable young men in army barracks. I have seen people criticise this book in advance for trying a dead person who cannot defend themselves or promoting salacious gossip. If you actually tried reading it, you would see that it really is not about Savile. It is a mirror that reflects the dark soul of Britain and for the sake of the families of people like Cheryl James we need to stop acting like children who can be groomed and wake up and see what is actually going on around us - at every level of society.

Re: In Plain Sight: The Life and Lies of Jimmy Savile 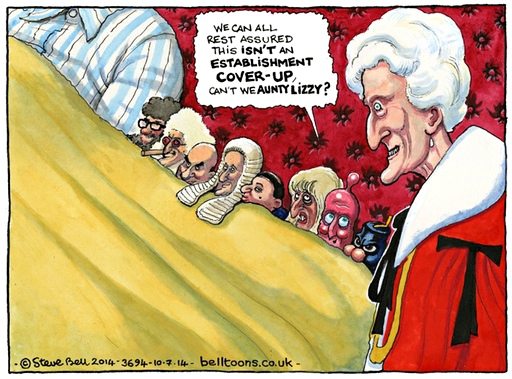 How many characters in the bed do you know?
Top
Post Reply Previous topicNext topic
2 posts • Page 1 of 1