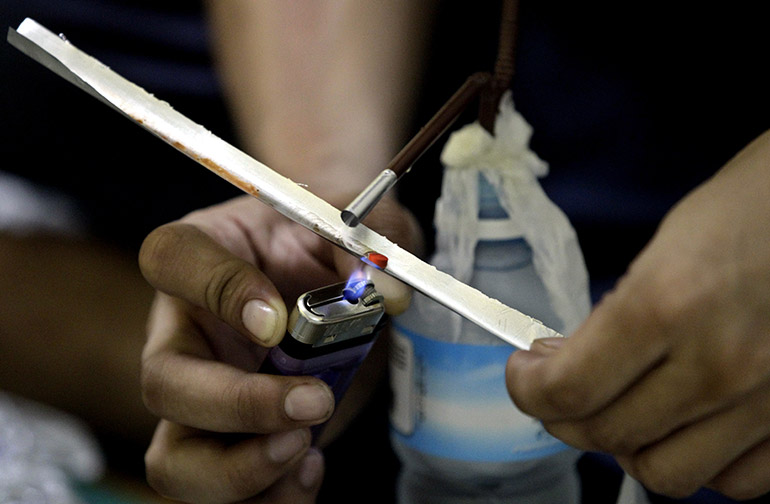 A man prepares methamphetamine in a house on the outskirts of Yangon in 2014. Photo: EPA/Nyein Chan Naing

Sihanoukville has been the scene of a runaway period of development that’s left most of the city unrecognisable to visitors. But it’s not just the look of the place that’s changed – social workers there say the city’s lurch to modernity has unravelled much of the community fabric that once provided a basic degree of protection to its most vulnerable residents.

Perched above the greasy puddles of the garbage dump, Sreymau certainly qualifies. She’s been hooked for years on crystal methamphetamine, or crystal meth, a drug known across Asia as ice. After years of ice addiction, say the aid workers that check in on her, Sreymau often thinks and acts as a child might.

Raised in a Phnom Penh household by a mother in the sex trade, Sreymau left for Sihanoukville between seven and nine years ago. She can’t remember exactly when that was. But she does remember that her young daughter, who’s lived the past three years full-time for safety’s sake with local non-governmental organisation M’lop Tapang, was born about a year after she arrived on the coast. Pausing, Sreymau asks co-director Maggie Eno how old her daughter is now. Eight, she responds. Her daughter is eight. Sreymau has lived in Sihanoukville for seven years.

It’s been a hard past to a grim present, but Sreymau is now one of around 150 people who regularly get drug-related help from M’lop Tapang, a Sihanoukville-based aid organisation that draws its name from a Khmer reference to the shade of the umbrella tree. The group works mostly with youth but sometimes with adults with children.

Some of those cheap, rented rooms of the past are now filled with Chinese workers who labour on the city’s soaring new skyline of half-built casinos, hotels and tourist attractions. But much of the once-affordable housing has been priced out of reach or levelled in the construction overhaul.

And it’s not just housing prices that have gone up. Eno and her coworkers say the price of meth in Sihanoukville seems to be increasing along with goods and services.

Young Cambodians are most likely to use drugs, and are also the ones most targeted by traffickers importing meth from Laos and China. NACD and DAINAP statistics from 2017 show 83% of admissions to the Kingdoms’ drug treatment centres as between 18 and 35 years old. About 5% were just 10-17 years old.

full https://southeastasiaglobe.com/down-and ... h-addicts/
The idea that seeing the world is going from place to place to look at obvious things is an illusion natural to dull minds.
Top
Post Reply Previous topicNext topic
1 post • Page 1 of 1