International Stand-up Stars in PP and SR this weekend

International Stand-up Stars in PP and SR this weekend 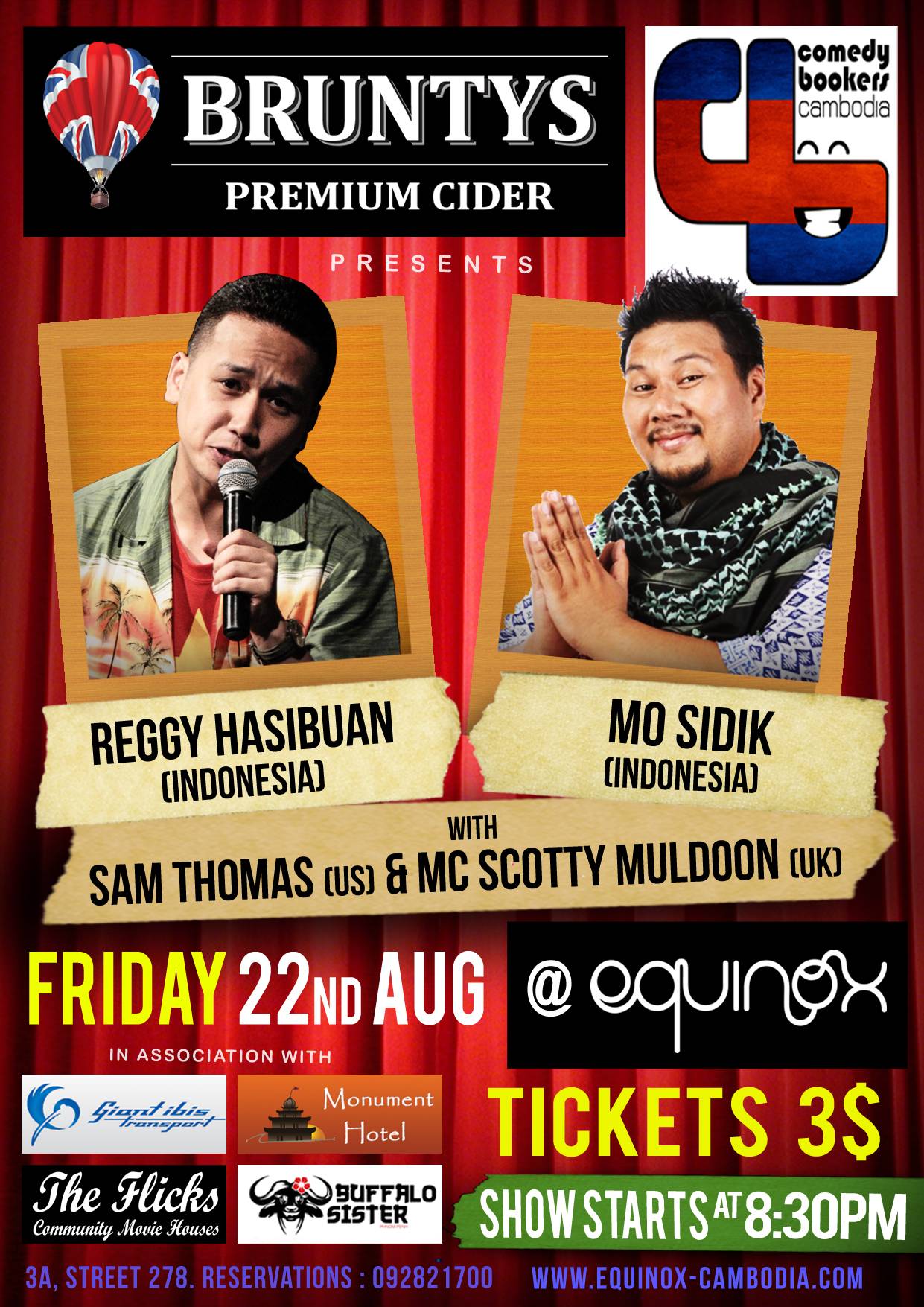 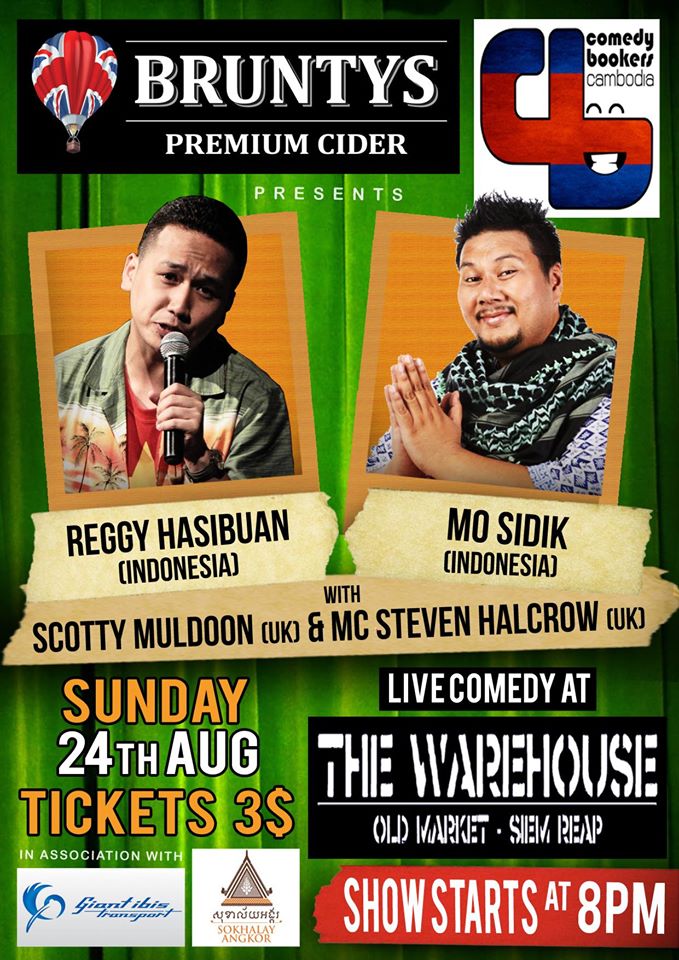 The Comedy Club Cambodia and Comedy Bookers Cambodia have been busy on your behalf, scouring the region for more top comedy talent. And they’ve come up trumps this month with not one but two sensational acts all the way from Indonesia to perform a 2 legged tour of Cambodia in both Phnom Penh and Siem Reap.

PHNOM PENH: Famed funnymen Mo Sidik and Reggy Hasibuan are set to storm the stage at Equinox on Friday August 22 for the price of just three US dollars.
This show is brought to you by Bruntys cider – which will be available at the discounted price of $2 per bottle on the night – with co-sponsors Monument Hotel, Giant Ibis Bus Company, The Flicks Community Movie Houses and Buffalo Sister Restaurant. Doors open at 7:30pm with showtime set for 8:30pm.
A supporting set will come from the ethereal Sam Thomas, with everyone’s worst best friend Scotty Muldoon as MC.

SIEM REAP: Catch Mo Sidik and Reggy Hasibuan for the second leg of their Cambodian mini-tour at The Warehouse on Sunday August 24, in association with Brunty's, Giant Ibis and Sokhalay Angkor.
Mo Sidik and Reggy Hasibuan are coming all the way from Jakarta—after entertaining the folks of Phnom Penh—to make your Sunday that little bit more bearable. Doors open 7pm with showtime set for 8pm.
Supporting act will take form in Phnom Penh based comedian, Scotty Muldoon, with Steven Halcrow tearing up the mic as MC.

More on Mo
Stand up comic Mo Sidik has been flying the Indonesian flag high and mighty over the past year with gigs in Malaysia, Australia, Singapore, Hong Kong and Afghanistan. He was also a star performer at the 2012 JakFringe alongside such comedy luminaries as Bill Bailey, Emo Philips, Glenn Wool and Phil Nichol.
Before becoming a comedian, Mo started his entertainment career as a radio announcer, broadening his skills into work as an MC, moderator and event host. Now 15 years into the industry, Mo is only getting funnier.

Reggy review
Reggy Hasibuan is a pioneer in English-speaking comedy in Indonesia, and has brought his well-observed and uncompromising material about life, religion and politics to audiences across the region.
Reggy performed his “Aint No Saint” show at the 2012 JakFringe festival and has recently co-headlined nights in Kuala Lumpur with Mo Sidik.
His increasing profile on home soil has seen him receive guest invitations on radio and TV shows such as Hard Rock FM Jakarta, Ernest Prakasa’s Merem Melek Tour, Kompas TV’s Comic Action and Metro TV’s Stand Up festival.
Top

Re: International Stand-up Stars in PP and SR this weekend


Supporting act will take form in Phnom Penh based comedian, Scotty Muldoon, with Steven Halcrow tearing up the mic as MC.

Good stuff, mixing it up with the international guests!

Re: International Stand-up Stars in PP and SR this weekend

TONIGHT!! It's looking like it's gonna be a busy night of laughs tonight. Get yourself there well before 8.30 if you want a seat...
Top
Post Reply Previous topicNext topic
3 posts • Page 1 of 1