History of Human Plague in Cambodia

History of Human Plague in Cambodia 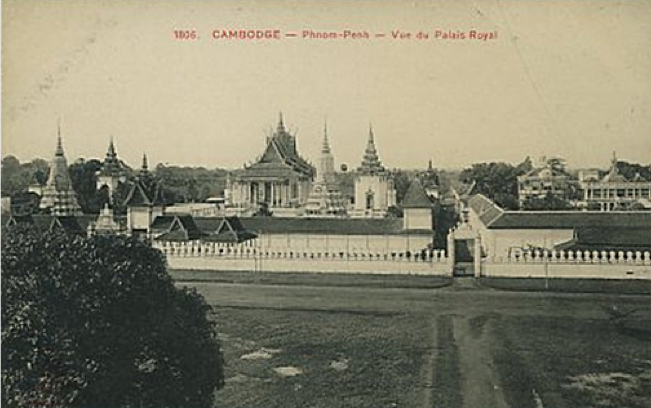 The first epidemic, 1907-1908
The first identified case of human plague in Cambodia was documented by Dr. Lannelongue, on June 2, 1907. The case was a worker on Phnom Penh river harbor22 , a longtime resident of the Chinese area, near the old market, located next to the Ounalom pagoda21. According to other sources, the first case occurred in a Vietnamese-born non-commissioned officer of the French militia23. A map of Phnom Penh dated ca. 1910 is presented in annex.

n April 1908, plague emerged within the compound of the royal palace itself, which was to become a focus of plague infection and a source of dissent vis à vis the colonial powers23. Lady Preng, one of the concubines of the king's son, Prince Duong Mathura, fell ill with plague and died. The Prince and his sister, Princess Sopha Dy, formally forbade the French physician to examine the body which was promptly cremated. Despite condoning this attitude and against French demands, King Sisowath nevertheless ordered that the house of the Prince be demolished and burned publicly.

After the first epidemic: 1909 – 1921
In 1915, Yersinia pestis bacillus was identified in a shrew (Crocidura murina) found dead in the home of a deceased plague case in the Chinese quarter of the city of Phnom Penh26. This shrew was highly infested by oriental rat fleas (Xenopsylla cheopsis). Rat infestation was intense in the Chinese-style shophouses of what was then the Chinese quarter of Phnom Penh. This densely populated area composed of Chinese shophouses with a high population density and lack of sanitation, especially at the back of the shophouses, was considered the epicenter of each outbreak in the city.

The plague epidemic in Phnom Penh and ensuing period, 1922-1929
An intense epidemic occurred in Phnom Penh in 1922-1923 (Figure 3). Around that time, the estimated population of the city of Phnom Penh was 80,000 inhabitants31.At the request of the governor general, Mr. Bernard (Director of the Pasteur Institute in Saigon), Mr. Pons (Head of the Laboratory) and Mr. Bartemellier (Entomologist at the University) conducted a one-month mission to Phnom Penh between July 5 two August 4, 192332. Available epidemiological data discussed in the literature are based on biological diagnoses which are discussed below.In all, a total of 855 confirmed or suspected cases of human plague were reported for the year 1923 in Cambodia30, including 647 in Phnom Penh32. But these data are based to a large extent on liver biopsies analysis and are severely biased (see below).

Full.http://www.pasteur-kh.org/wp-content/up ... l-2011.pdf
The idea that seeing the world is going from place to place to look at obvious things is an illusion natural to dull minds.
Top

Good thing the rats are still there minus the plague

Rats and those other vermin pigeons (rats with wings) - dirty plague ridden bringers of misery to man. Crows are evil too. Fair Game for a .22 and a good dog.

The Wuhan has been detected in Korea, Japan, Taiwan, Hong Kong, Thailand, and the USA. How long before Cambodia and the Philippines find out that the Chinese plague-carrying tourists bring more than big wallets? I hope everyone has a number 1 top drawer insurance policy because I have a feeling that it won't be long before shitsville sees it's first case. Canada had 44 die from SARS while spending $4,700 per capita on health care, the KOW has a per capita spending of $70, a population with an IQ over 10% lower on average than Canada's and a pisspot more Chinese. I wouldn t be worrying about rats, I'd Be more concerned about the Chinese
Top
Post Reply Previous topicNext topic
6 posts • Page 1 of 1